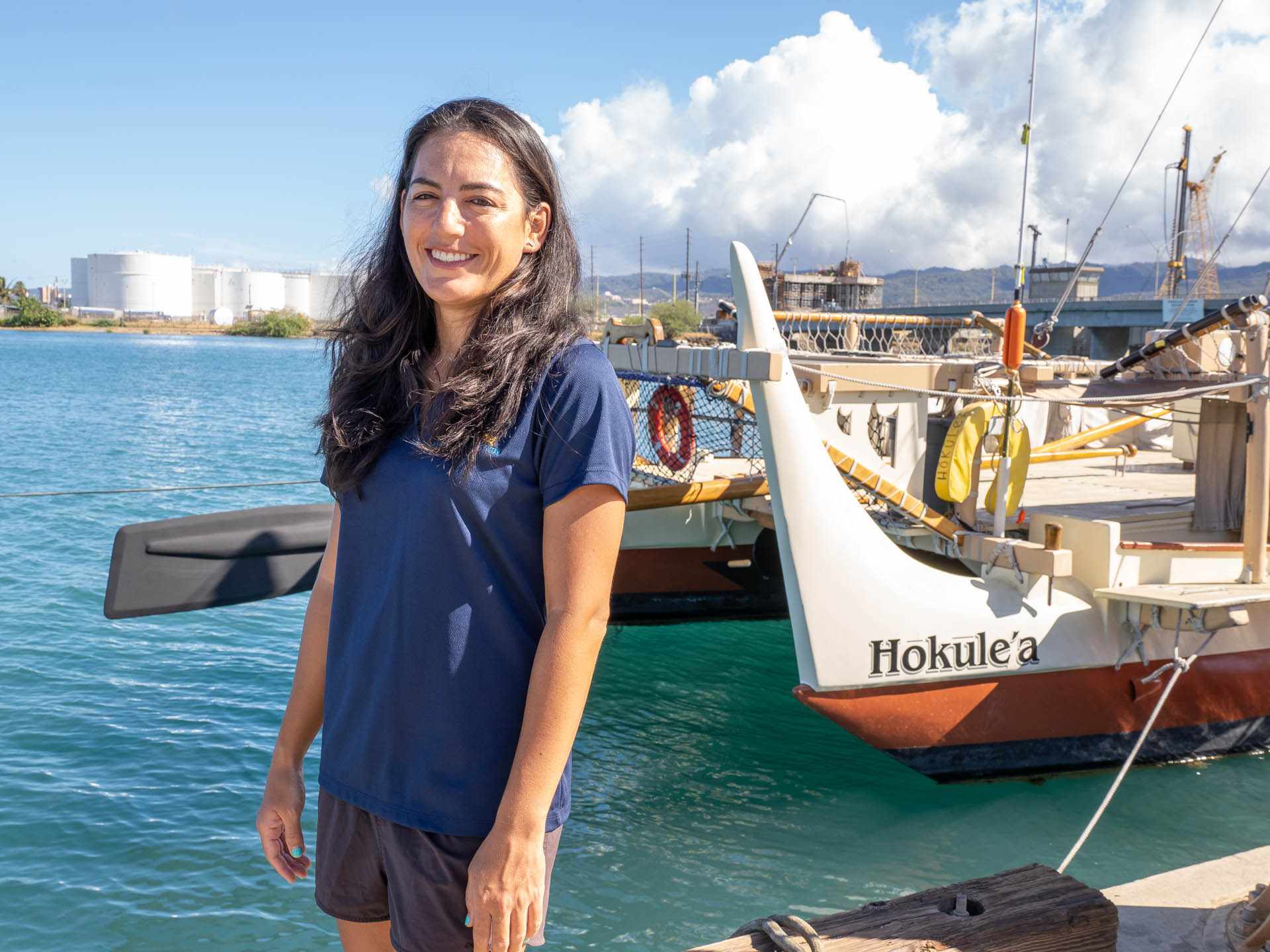 “Wake up, there’s a tear in the sail,” were the words Vance Kaleohano Farrant woke up early one morning, five days at sea and thousands of miles from the nearest landmass.

Farrant and other crew aboard Hokulea ejected from their beds below deck, donned lights, and scrambled to lower the spar to change sail before drifting closer to the incoming squalls.

Once the spar was lowered, Captain Lehua Kamalu cut the sail ties with his knife, rather than wasting time untying each tangled knot.

Effective decisions like these were commonplace in his role on a 3,000 mile voyage across the Pacific to Tahiti.

But Kamalu herself was unique. During the 17-day voyage, which departed the sandy island of Honolulu on April 11, she became the first woman to command and sail Hokulea on the ancient sea route from Hawaii to Tahiti.

Kamalu is one of a growing number of women who are reviving an ancient tradition of travel in the spirit and values ​​of their ancestors.

For them and the Polynesian travel companyan Oahu-based non-profit organization created to research and perpetuate traditional Polynesian ways of travel, which means including women at the helm of what has long been a patriarchal tradition.

“The need for inclusion and the need to bring the community together are essential elements in being able to make changes for a better world,” said the group’s president and co-founder, Nainoa Thompson.

This development is coming to a head as the Polynesian Voyaging Society prepares to embark on the Trip to Moananuakea around the Pacific aimed at training the next generation of travellers.

Rise to the occasion

Thousands of years ago, travelers settled in the Pacific islands without instruments of navigation. Polynesians crossed vast oceans through wayfinding, a practice of navigating by stars, sun, wind, waves, and even wildlife.

PVS was founded in 1973 to continue the practice and the spirit of exploration. The members created a replica of the traditional double-hulled canoe named Hokulea to rediscover their seafaring heritage.

But it wasn’t until she was studying mechanical engineering at the University of Hawaii Manoa that she came across an opportunity to volunteer with PVS to send Hokulea around the world on their Journey into the world of Malama Honua.

“I had no intention of being a captain, of working here, of sailing,” she added. “I was like, ‘If I can help do some sanding, lashing – the basics – that would be great because I also have to, you know, put my career in line.'”

But after attending the first meeting filled with hundreds of enthusiastic volunteers, she never looked back.

“I took all the training that took place afterwards, even though I said I didn’t have time,” she recalls.

After graduating, Kamalu dove headfirst into round-the-clock volunteering for the duration of the five-year global voyage, applying his technical skills to mapping, communications and logistics.

In the process, she was invited to follow a training course as an apprentice navigator.

The next thing she knew, she was named captain for a 23-day, 2,800-mile leg of the trip from Honolulu to Half Moon Bay that she had originally planned for another captain to take over, making her d she the first woman to serve both. captain and first navigator of the Hikianalia.

Now, after her historic trip to Tahiti this year, Kamalu has come away with a newfound appreciation for the women leaders she grew up with.

“I don’t think I fully appreciated how different their experience might have been,” she said. “And I feel very lucky to have this community that allows you to do all of the same things – there’s no proverbial glass ceiling here.”

Nine years later, Kamalu describes his experiences as simply going through open doors for all members of the PVS crew, regardless of gender.

“I would go as far as I could once I had the chance to learn,” she said. “I don’t think I really wanted to make waves in this.”

“Then suddenly I was like, ‘Oh, I guess we’re all girls doing things that aren’t traditionally done by women,'” she added.

But Kamalu notes the complex cultural context surrounding this reality.

“Different people have very different opinions – as we all have the right to – about whether it’s a good thing or a bad thing, or whether a girl plays that kind of role,” she said. . “And you just have to be okay with that.”

Navigating these relationships, Kamalu turns to veteran travelers, like Kaiulani Murphy of Waimea on the island of Hawaii, who was the top student at Honolulu Community College’s Marine Education and Training Center when Kamalu began her career. travel.

“In all my time, I never felt like it was differentiated, that you can do something or that you can sail because you’re wahine (female),” said Murphy, who sails on Hokulea. since the age of 19. “It’s a nice balance.

She likens balance to the relationship between two hulls that together keep a double-hulled canoe afloat.

Attached to each hull is a kii, a carved statue that represents akua, or revered gods and ancestors.

Hokulea has a female kii on one shell and a male kii on the other. The male kii represents knowledge, but has no eyes – the wahine does. He needs her to navigate to reach the destination.

“In pursuing this ike (knowledge), it doesn’t matter whether you are kane (man) or wahine,” she added. “It’s about finding that balance.”

Murphy also began volunteering as a student at UH Manoa and became Thompson’s assistant after graduation.

Since her first sail in 1998, she has been involved in almost every deep-sea voyage, from navigation to coordinating educational activities. But her favorite trips have been inter-island trips, where she has connected with a growing local community of travelers.

“It’s great to be able to go to every island and have a home to stay in, have family everywhere,” she said.

Murphy hopes Hokulea will inspire the next generation of travelers to carry on knowledge once lost.

Over the next six years, PVS’ Trip to Moananuakea at circumnavigate the pacific will require everyone to be on deck, men and women alike.

Pomai Bertelmann, crew member of Hokulea and Makali of Waimea, Hawaii, believes Hokulea’s legacy is to make travel accessible to everyone.

“What matters is that we make the canoe available to everyone, that there are no conditions on who can be in it,” she said.

Sign up for our FREE morning newsletter and face more informed every day.