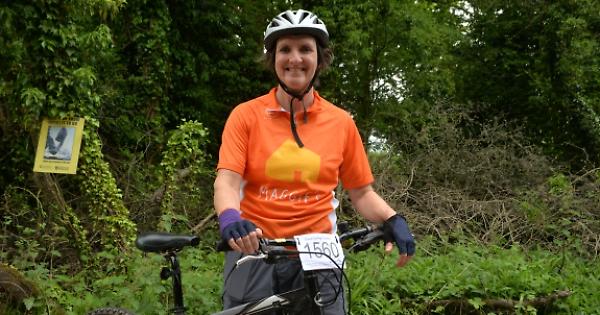 A WOMAN who has been successfully treated for breast cancer is set to take on a charity cycling challenge on Watlington Hill.

Lucy Hooper, 52, who lives at the foot of the hill, will compete in Maggie’s Everesting Cycle Challenge, which returns for the second year on Sunday May 8.

The event, which first took place last June, will raise funds for Maggie’s, a cancer charity based on the grounds of Oxford’s Churchill Hospital.

The challenge involves repeated treks up the hill until cyclists have climbed 8,848m, the equivalent height of Mount Everest. In the case of Watlington Hill, that means going up and down about 86 times.

Ms Hooper was one of 87 runners who took part last year and raised £49,000 for the charity.

Five days after the challenge, she was diagnosed with primary breast cancer following a mammogram.

A month later, she underwent surgery followed by 15 radiation therapy sessions. She was on hormone therapy at the time and had access to Maggie’s services, including a post-treatment course on how to manage your emotions after treatment ended.

Ms Hooper, who works as a writer for Maggie’s, said: ‘I used to drop by Maggie’s every time I had an appointment at the hospital, which was a great contrast to the quite scary hospital environment.

“When I finished the treatment, it was quite a strange time. It leaves you feeling a bit dark and you don’t know what’s going to happen.

“I met people who were going through the same emotions and that really helped me.

“The course definitely gave me my confidence back and I felt like one of the lucky ones who got rid of it very quickly.

“There’s nowhere you can get the kind of support you get from Maggie’s for nothing. You find a new home there, that you wouldn’t have imagined in a medical environment.

“Cancer treatments have been impacted and delayed by the pandemic and more and more people are having to deal with this, so we need to support them and need more donations.

“Now more than ever, we need to raise funds to build more Maggie’s centers so that more people can benefit.”

Starting at the top of the hill, the challenge route descends to the Ridgeway Horse Trail at the base of the hill and back.

Participants can choose whether they want to ride a “full Everest”, involving around 86 reps, or a “half Everest”, which has around 40.

Last year, Ms Hooper was part of a team that performed 43 reps and raised more than £6,000.

This year, she hopes to complete 10 rehearsals herself as part of a team of nine.

Ms Hooper said: ‘I’m doing this for a very personal reason – in my case the cancer was caught very early and the support I received from Maggie made me even more determined to take on the challenge again.

“This time I’m doing a ‘full Everest’. The challenge is unique and exciting, taking place in a beautiful part of the world and has definitely encouraged people to sign up. I can’t wait to get out on my bike and start training for it.

Pip Dingle, Head of Fundraising at Maggie’s, said: “Last year we were blown away by the efforts of the people who took up the challenge and their support teams.

“We had an amazing team of 40 volunteers and it was such a positive day that the whole community supported us. We are very grateful to everyone who participated.

“This year, we hope to raise a similar amount, every penny of which will make such a difference for people with cancer and their loved ones.

“If you are interested in joining us as a cyclist, a volunteer or want to sponsor the day, do not hesitate to contact us.”

Ms Dingle said the event was inspired by Watlington resident Sam Swanson, who completed an Everest challenge in August 2020.

She has walked up and down Watlington Hill 80 times and has raised over £10,000 for animal charity Medical Detection Dogs.

The challenge is open to teams of 4 to 10 people and the road will be closed to traffic with access provided for residents.

The event is again organized by Iconic Cycling Events and will be supported by the Spire and Spoke pub and cycle repair shop Sprocket Science in Watlington as well as Slime Cycleworks, which is based in South Oxfordshire.

You can register for the challenge at https://maggiesecc.eventbrite.com or email Pip Dingle at [email protected]