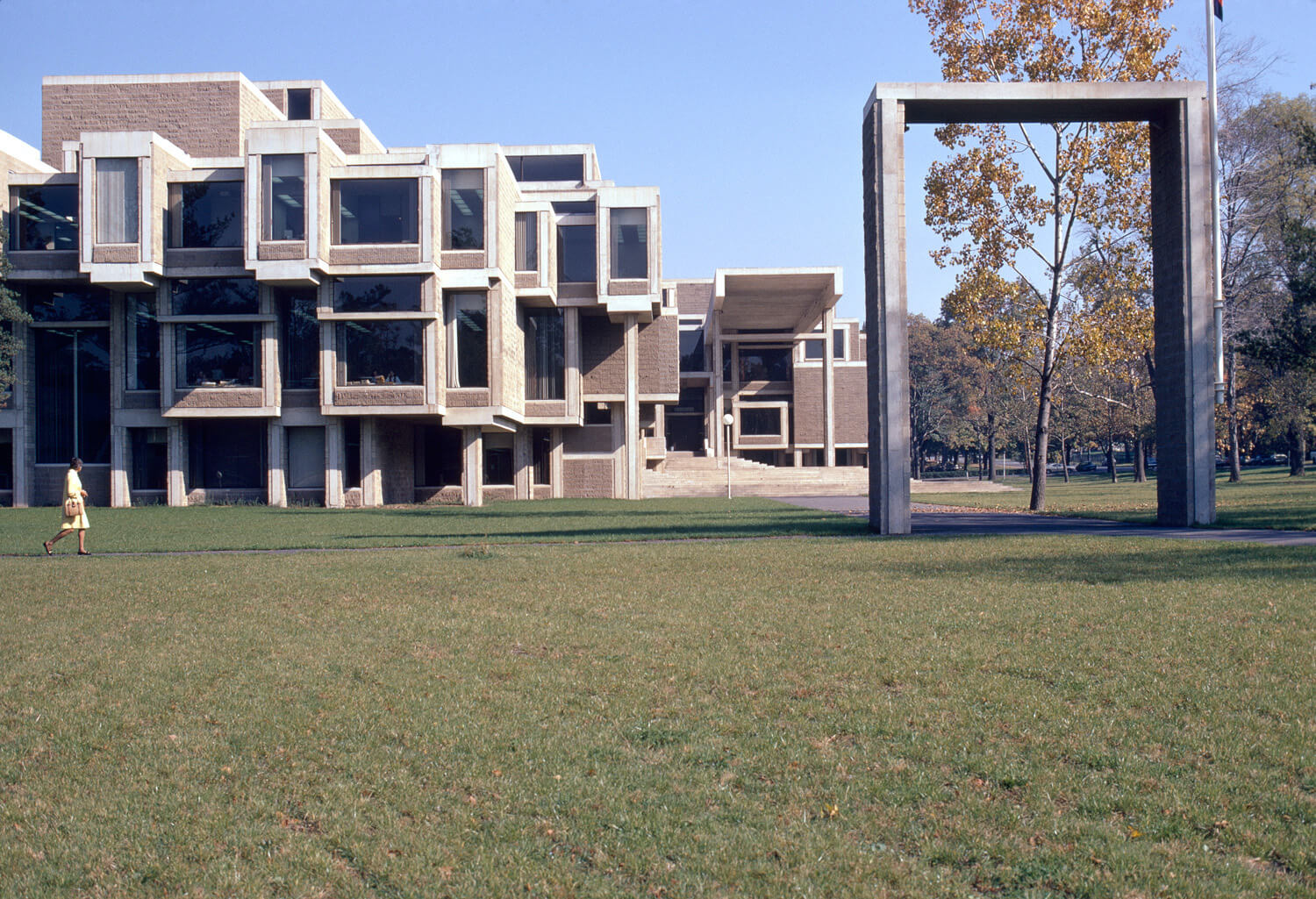 Below are the final three articles written as part of the New Voices in Architectural Journalism Fellowship, a mentorship-based program developed by The architect’s journal and the Pratt Institute School of Architecture. All three articles were published in the June 2022 issue of A; a second set of pieces written by New Voices’ inaugural cohort – Ekam Singh, Catherine Chattergoon and Monty Rush – will be published in the July/August issue of A. You can read more about New Voices in A introductory note by editor Aaron Seward.

Being conservative is hard. Being a curator for the buildings of Paul Rudolph is even more difficult. Rudolph is often considered the unluckiest architect of his generation, considering how many of his buildings have met the wrecking ball. The anti-Rudolph vibe began while the architect was still alive, but intensified after his death in 1997. The razings of the Burroughs Wellcome building in Triangle Park, North Carolina, and the Biggs residence in Delray Beach, Fla., both in 2020, put already anxious activists on the fate of the Boston Government Service Center and other embattled projects.

Born to a Kentucky reverend in 1918, Rudolph studied architecture at Auburn University (then known as Alabama Polytechnic Institute) and, after a stint in the Navy building ships, graduated a master’s degree at Harvard. Rudolph moved to Sarasota, Florida, and wasted no time in establishing his own office in 1952, designing modern single-family homes that defined a new way of living. He produced buildings steadily throughout the 1990s, by which time he was recognized as one of the nation’s most important architects. The many projects he designed (over 150 were completed, with about the same number not built) were celebrated for their formal ingenuity and bold use of concrete, Rudolph’s favorite material.

Given his reputation, why, then, are Rudolph’s buildings so vulnerable to demolition?

There are a number of intersecting forces at play, from fluctuations in the economy to public tastes, which can lead to the demolition of an older building. In Rudolph’s case, an aversion to associations linking brutalism (the style often attributed to his work) with urban renewal and ideas of overcoming government, explains the tenor of the backlash. But more specifically, the lack of funding for the ongoing maintenance of Rudolph’s buildings, which were often very large and required dedicated maintenance, was a driving factor in the demolition.

Timothy M. Rohan, a leading Rudolph scholar based at the University of Massachusetts at Amherst, said preservation and sustainability proponents would do well to keep the foreground in their campaigns. Creating and adhering to maintenance schedules helps to catch problems that could jeopardize a building’s performance before they get out of control. “It is possible to keep everything. You just have to have the will to do it,” Rohan said. He suggested that incorporating maintenance into sustainable practices could be a way to overcome the fact that many Rudolph projects sit on land that has skyrocketed in value in the years since construction. Unless a compelling case for a landmark and rehabilitation or adaptive reuse is made, land values ​​will always prevail.

The Twitchell Residence, built in the 1940s in Siesta Key, Florida, was demolished in 2007 after falling into disrepair. Like other houses designed by Rudolph at this time, the house promoted passive cooling in a hot, humid climate decades before such ideas were popular. But updated fire and residential building code requirements prompted owners to sell the property, which was on attractive and expensive land. Preservation arguments are even less likely to sway individual owners who may not want to be burdened with the responsibilities of maintaining a significant architectural piece.

The landmark is helpful but not a surefire way to preserve Rudolph’s existing residences. In August 2020, the owners of the Biggs residence virtually demolished the house, leaving only the steel frame. They did so without alerting the city, which reportedly asked to review the demolition plan, as the property is listed on the local Delray Beach Register of Historic Places.

Riverview High School, built in 1958 in Sarasota, was demolished in 2009. The original design considerations of sunshades and covered walkways suitable for the subtropical climate did not hold up well to the introduction of air conditioning after the renovation of a building. The tightness of the building caused mold problems which could not be solved without further costly renovations. Despite the refusal of historians, architects and local residents, the county school board did not revoke the demolition order.

Yet this passion for architecture of communities and curators is exactly what can save buildings that are on the way out. Rudolph’s addition to Sarasota High School, completed in 1960 in a style similar to Riverview, was rehabilitated in 2015. In addition to strengthening the structure and removing asbestos stucco on the exterior, Harvard Jolly Architecture and local architect Jonathan Parks have preserved the original breezeways. According to Rohan, the renovation would not have happened without the efforts of the Sarasota Historic Preservation Program, which helped the school board recognize the importance of Rudolph’s architecture and doubled down after the loss of Riverview. “The value of buildings is tied to a sense of place and identity, and value extends beyond the building’s immediate financial gains,” he said.

The cachet of mid-century modern design certainly elevated Rudolph’s early work over his mid- to late-career work, often mislabeled as Brutalist. (The buildings of the 1970s mark a return to steel and glass, albeit married to large masses.) Both criticized and applauded as a “difficult” style of architecture to digest, Brutalism, with its affinity for the unadorned concrete, unrelenting forms, and expressive structural systems, draws mixed emotions from the communities that live and work inside these projects. Rudolph’s municipal buildings come under even more public pressure than his other residential projects due to their high visibility and contextual ties to government entities. Rohan said these buildings are often used as “financial and political soccer balls,” especially when administrations change.

After a flood in 2011, the Orange County Government Center in Goshen, New York needed to be restored. But the project was botched and involved stripping the building’s multi-level interiors and partially smoothing the exteriors to match a new adjoining structure. More recently, in Boston, the government services center designed by Rudolph risks being similarly disfigured, or even demolished altogether. In an effort to redevelop portions of the site, the Massachusetts Capital Management and Maintenance Division has signaled its willingness to demolish the Charles F. Hurley Building, a key part of the multi-block project. write for A, local architect Chris Grimley championed the “radical vision” of Rudolph’s larger scheme, which was only partially realized. That the complex is linked to the failure of the American welfare state is unfortunate, but that, he argued, is reason enough for its preservation. “Such a perspective,” wrote Grimley, “celebrates all elements of urban history, including those we do not find particularly beautiful, for as history suggests, standards of beauty are not fixed but oscillate with time.”

Architectural critic Kate Wagner laments the conversations often sparked by these actual or impending demolitions. Echoing Rohan, she finds that little effort is made to understand the richness of Rodolphe’s architecture; instead, more energy is poured into painting projects such as the Burroughs Wellcome building or the Government Service Center with a broad political brush. “These buildings fall prey to polemical arguments that modernism was a failure or that they were too ambitious for their time,” she said. “It’s just easier to say they’re prey to time. Any building can fail. We have to take care of what we put on this earth.

Encompassing ingenious little Florida homes and schools and unforgettable civic citadels, Rudolph’s work still captures the imagination of many. Advocacy groups such as Docomomo have made inroads in spreading the cultural values ​​of modern architecture more generally, while the Paul Rudolph Foundation and the Paul Rudolph Institute for Modern Architecture work actively to safeguard the architect’s legacy. Through these efforts and the thoughtful work of designers and clients, many are fostering a culture of care for what has already been built, including the architecture of Paul Rudolph.

Monty Rush is a BArch student at the Pratt Institute School of Architecture. In 2021-22, she was one of three New Voices in Architectural Journalism Fellows. The program was sponsored by Pratt and A.