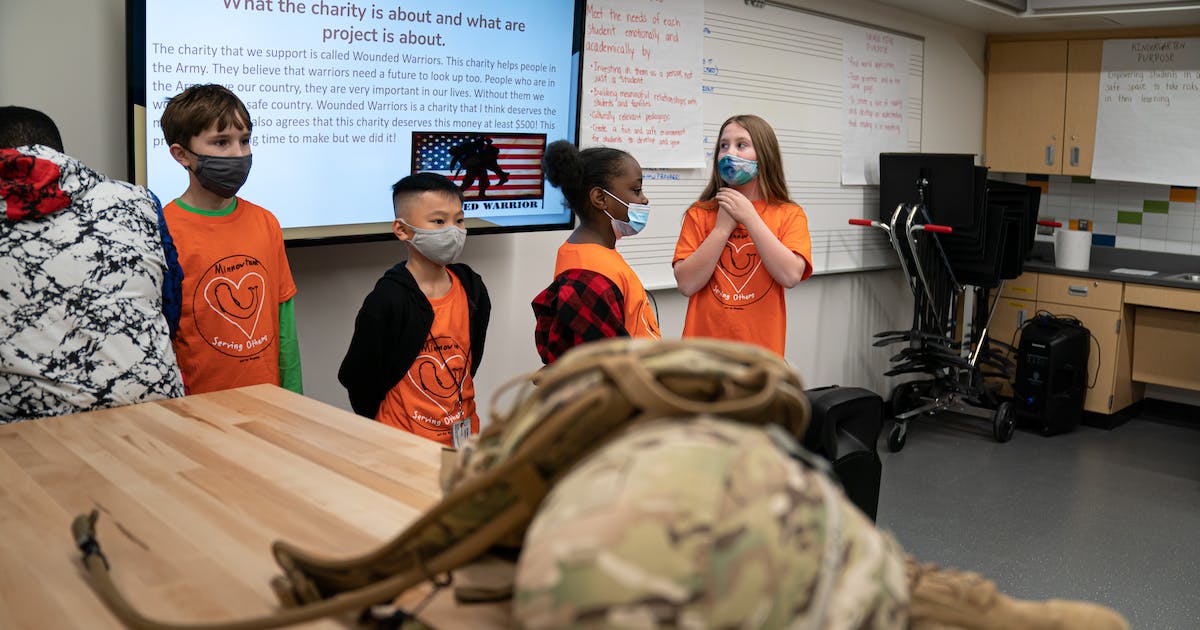 Like all elementary students, Mason Behrends spends the school year honing his math and language skills. But as a fourth grader at Willow Lane Elementary in White Bear Lake, Mason also studied how best to help others.

“I learned that you don’t need money to serve others, you just need happiness and time,” he said.

Mason participated in a project called Minnow Tank. It’s named after ABC’s reality TV show “Shark Tank,” in which entrepreneurs present business proposals to a panel of investors – or “sharks” – in hopes of persuading them to invest. in their businesses.

The difference with Minnow Tank, besides the youth of the applicants, is that the students are not trying to win funds for personal benefit. They present on behalf of charities they have chosen – organizations that focus on issues children are passionate about.

“There are so many lessons that come with this,” said Leigh Anderson, outreach coordinator at Willow Lane, who created and oversaw the project.

Working as a team, students learn to help each other and cooperate. With the help of adult volunteer coaches, they give presentations about their charities to a panel of adult volunteer judges, who evaluate the teams’ work and allocate donations accordingly.

The fourth year students completed their version of the project in early January. Minnow Tank is currently introduced to third graders; fifth graders will take their turns later this year.

Volunteer projects have long been a part of education, said Willow Lane principal Matt Menier. But traditionally they involved standard community service work, such as picking up trash or packing boxes of food for distribution. Minnow Tank’s structure expands learning opportunities, teaching children about the work of specific charities while learning skills such as cooperation, mutual support, public speaking, even environmental management. failure.

“Learning about a cause is service learning…it helps kids socially and emotionally,” Menier said. “We help to develop empathy, to develop compassion, to speak of service and gratitude.”

Willow Lane has a diverse student body, with over 60% students of color and over 60% children receiving free or reduced lunch. In some cases, students work on issues they may have encountered in their own lives.

The project starts small, with exercises designed to practice thanking and praising others. For example, a school employee visits a classroom and the students take turns telling the person why they like them.

“You’re caring and awesome because you give us great lunches every day, and if you didn’t, we’d starve,” said a third-grade boy, whose class was still just that. at the start of the project, to a visiting school catering server.

Students also learn about needs around the world. The same third grade class watched a video about a girl in Chad who walks for miles every day – carrying her baby brother on her back – to fetch clean water for her family.

Patty Hall, Founder of H20 for life for schools and a retired teacher, spoke to the class about global water scarcity. She offered such grim statistics as the number of children dying from water-related diseases, while empowering students to contribute to the solutions.

“More than one million children in the United States have raised funds for projects for more than 500,000 children around the world who now have access to water and toilets,” Hall told the class. “I truly believe that young people can be leaders of change, and each of you can be an agent of change.”

In the fourth-grade student project, students were introduced to charities focused on areas such as the environment, disease, and animals. They picked the causes they were most passionate about and formed 12 teams based on their interests. In teams, they worked together with the help of coaches – volunteers from the Rotary Club of White Bear Lake – to put together presentations that promoted the value of their chosen charity.

“They were curious, they were eager to learn, they were totally committed to what they were doing,” coach Jackie Reis said. She was impressed by the way the young people worked as a team. “They were very respectful – not just to me but to each other.”

Coach John Channon said the coaches probably benefited as much as the kids.

“I was really looking forward to going” to practices, Channon said. “Just for the ability to engage with these kids and watch them grow and learn a bit and feel like maybe it was really good for them – and I helped.”

The Rotary Club raised $2,200 to reward selected charities, plus additional funds to make t-shirts for students, teachers, and coaches featuring a Minnow Tank logo designed by one of the students. It features the outline of a minnow inside a heart.

The judges, who included more Rotary Club members as well as school district administrators, rated each presentation on its preparation, enthusiasm, teamwork and creativity.

“There were a lot of adults in the room, but they did a great job,” said Chris Streiff, a Rotary judge and former Willow Lane manager who retired last year. “When you see kids in a leadership role, it’s fun to watch them blossom.”

“When I started, I was shaking and scared,” he said. “I picked up the pace after that.”

The judges chose the top three teams and charities. First up, receiving $1,000, was the Eden Prairie-based Minnesota chapter of HopeChildren, which offers events and support for families in which a child has cancer or another life-threatening illness. They donated $750 to Masonic Cancer Center and $450 to Second Chance Animal Rescue.

Inevitably, nine other teams did not win donations to their charities. But that’s okay, Anderson said — it’s part of learning. Failures, after all, are inevitable even on the path to success.

“Part of what we’re going to learn is that if it’s not going our way, is it okay to be sad and frustrated?” Anderson said. “How can we channel this emotion? »

Menier said Minnow Tank is another opportunity for students to show they will be effective as leaders of tomorrow.

“People ask me, aren’t you worried about the future?” said Menier. “I can say that I’m more optimistic about the future because of how [the students] interact together. Children have tremendous compassion and empathy – they want to do the right thing.”