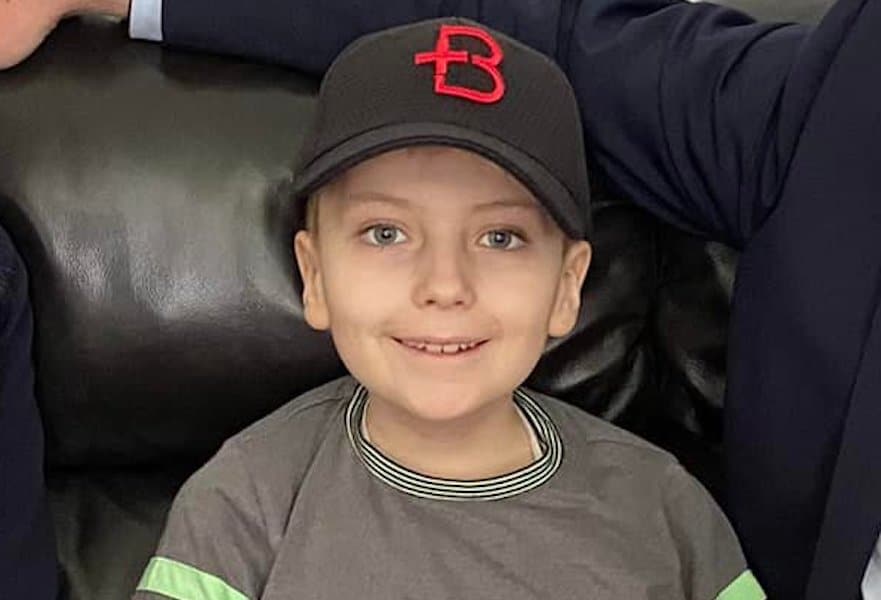 Family and friends have been devastated after a nine-year-old schoolboy died after a courageous battle with leukaemia.

Banbridge’s Adam Watson had inspired a fundraising campaign under the ‘B Positive’ umbrella, with many social networks changing profiles to raise awareness.

David and Sara’s son Adam was diagnosed in October 2019.

During lockdown, in 2021, he visited the Royal Manchester Children’s Hospital for treatment.

This happened after the family learned in December of the previous year that Adam, who had been in remission for 10 months, was again battling the disease.

In May 2021, he returned home from hospital to recover from a cord transplant.

In June this year, his parents spoke at length to Deputy Minister of State Conor Burns, as he visited the family home to offer support.

Upper Bann MP Carla Lockhart also visited at the time and spoke fondly of Adam and offered her help and warm wishes to the family.

She said tonight: ‘Although I spoke to David and Sara last night and knew how ill Adam was, it was shocking and devastating news that Adam is now ‘safe in the arms of Jesus”.

“My heart tonight aches for David and Sara and the family circle. I can’t imagine the pain they must be feeling at the loss of Adam. Losing a child has to be the hardest thing in the world to accept and that journey for David and Sara has sadly begun.

“There are no words that can ever be spoken that will take away the pain and pain, but we just pray that they have the strength to get through the tough times ahead.

“When I think of Adam, I will always remember him as a little warrior, someone who fought his battle with great determination and inner strength. Beating leukemia once, he fought so hard when he heard the devastating news that she had returned, unfortunately, it was just too much to beat him up again.

“I recently had the most humbling and memorable time with Adam when I introduced him to Minister of State Conor Burns. Conor was so taken with Adam and his offbeat humor, knowledge of local politics and American that he visited her again yesterday.

“Adam, it’s safe to say, left such an impression and I know he has been and will continue to be mentioned in the halls of power in London and Washington as we seek to bring real change for children and families battling this dreaded disease.

“It’s such a sad day. Adam’s Army and the B-Positive campaign that Adam inspired and galvanized an entire community, has lost its little champion.

It had been confirmed this afternoon (Wednesday) that the young schoolboy had sadly passed away.

Tributes have been paid online, an outpouring at the loss of such a popular and brave young man.

Among them, Glenavon FC Academy said: “We are deeply saddened to hear the news that young Adam Watson passed away earlier this afternoon.

“Adam and his family are the driving force behind the B Positive charity that the Academy has been supporting and promoting over the past few months.

“Our thoughts and prayers are with David, Sara and the extended family circle at this time.”

And the Downshire Guiding Star Flute Band also paid their respects and offered their condolences.

He said: “The group is devastated at the news of Adam Watson’s death today, following his long battle with cancer.

“Adam and his parents Davy and Sara are longtime friends and great family members of our band, with Davy having been a bassist and outstanding member of the band board for several years.

“Family has been at the heart of all the charity work we have done over the past decade and the dedication and effort they have put into helping others is remarkable. The fact that during their toughest battle as a family, they started B Positive, a charity to help others in their position, is a measure of the Watsons’ kindness.

“When the band were stuck and needed a bass drummer, Adam’s dad Davy came to the rescue and Adam came to his side to ‘give big licks’ through Newcastle with a proud mom watching.

“Our thoughts and prayers are with David and Sara and all of the extended family at this time. Adam’s story and how the family faced the disease so courageously will be an inspiration to others who are in the same situation.

He said: “Today our band received the very sad news that our little cymbal player Adam Watson has passed away, he has gained his angel wings and God is receiving a beautiful baby boy.

“Our members send their sincere condolences to Mom and Dad Adams, David and Sara, and the entire Watson and McAdam families.

A family friend, in a beautiful tribute, shared a video of Adam with these words: “Unfortunately this afternoon Adam lost his greatest battle with cancer. Adam, you are now free from all pain and you are now in the playground of paradise. Adam was only with us for a short time, but his legacy will live on forever.

He was the loving and special son of David and Sarah. His funeral will be Friday August 5 at 12:30 p.m. at Seapatrick Parish Church, followed by interment at Banbridge New Cemetery.

Will be fondly remembered and sadly missed by his mum, dad and the entire family circle.

Our deepest condolences go out to Adam’s family and friends at this time.