Top-seeded Tennessee Volunteers bounce back, even in series with win at NCAA baseball super regional 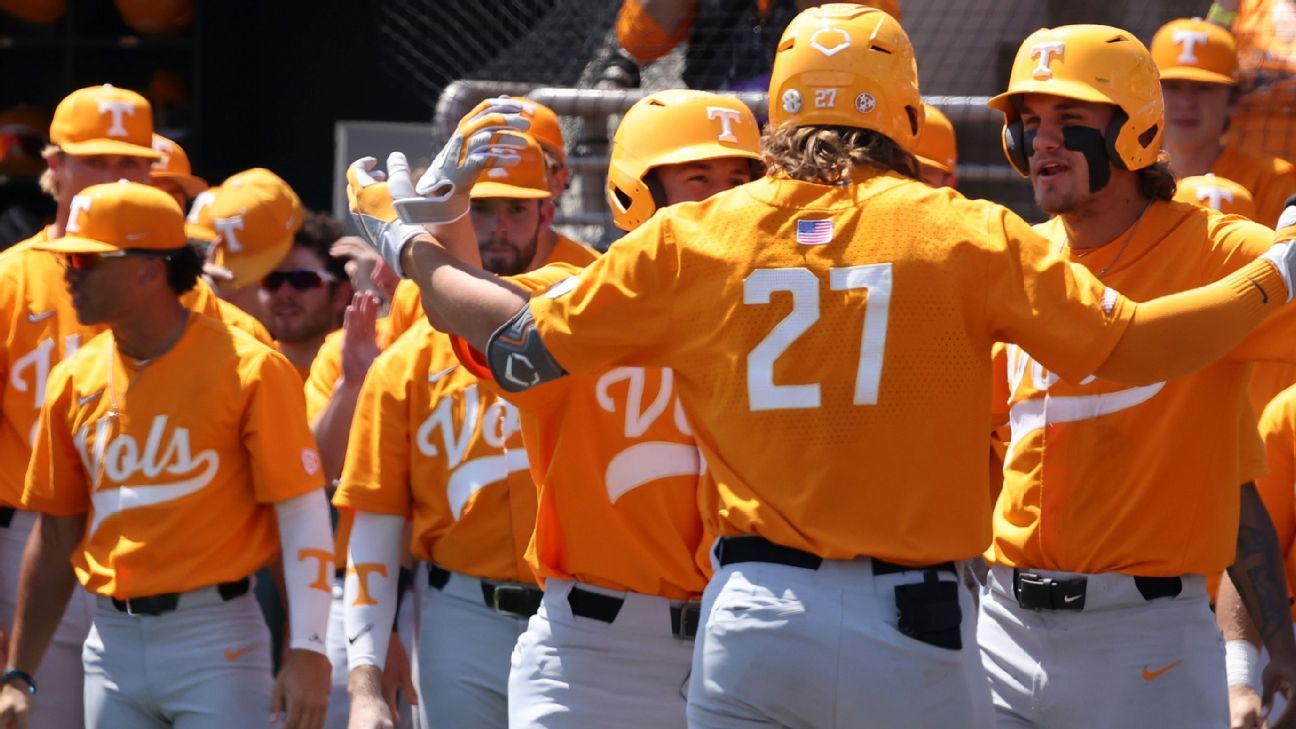 Knoxville, Tenn. –Luc Lipcius hit two home runs in an eight-run fifth inning and No. 1 seed Tennessee cruised to a 12-4 victory over Notre Dame on Saturday to stay alive in the Knoxville Super Regional.

Tennessee (57-8) and Notre Dame (39-15) will play Game 3 on Sunday with a College World Series spot on the line. The Fighting Irish beat Tennessee 8-6 on Friday. Tennessee is looking for its second straight appearance and sixth CWS appearance overall. The Vols never won the event, finishing second in 1951. Notre Dame made two CWS appearances – 1957 and 2002.

Tennessee was clinging to a 1-0 lead — on Trey Lipscomb’s RBI double in the first inning — heading into the start of the fifth. Lipcius hit Notre Dame starter John Bertrand (9-3) down 1-1 to start. Cortland Lawson doubled and moved up to third on a Seth Stephenson single. One out later, Jordan Beck hit a three-point shot to make it 5-0. After Lipscomb went out, Evan Russell homered to left field. Jackson Dennies picked up Bertrand and walked Jared Dickey before giving up a single to Christian Moore. Lipcius made it 9-0 with a three-point shot.

Jorel Ortega scored an RBI brace in a three-point seventh to cap the Volunteers’ tally.

Jack Zyska hit a two-run homer in the bottom of the eighth for Notre Dame. The Irish were limited to seven hits — two for extra bases — after hitting four homers in their first-round victory.

Chase Dollander allowed just two runs on five hits in seven innings to improve his record to 10-0 this season. He withdrew five.

Tennessee played without center fielder Drew Gilbert. Gilbert was suspended for one game after being ejected for contesting a strike call in the fifth inning on Friday. Pitching coach Frank Anderson, who was ejected for running into the field, also missed the game.

TEXAS A&M 4, LOUISVILLE 3: The Aggies picked up a second straight one-run victory and will return to the College World Series for the first time since 2017, the next leg of a turnaround season under freshman coach Jim Schlossnagle.

A year after failing to even qualify for the Southeastern Conference Tournament, Texas A&M posted the second-best record in the conference and has now won five straight in the NCAA Tournament.

The super regional sweep in College Station, Texas, came a year and two days after the Aggies hired Schlossnagle from TCU, where he led the Horned Frogs to five CWS in 18 years.

“At that time, a year ago, I was regularly waking up at 3:30 a.m. sweating all over my body,” he said. “I had just left such a comfortable place. To sit here going to the College World Series, every ounce of credit goes to the players.”

Relievers Will Johnston, Brad Rudis and Jacob Palisch combined to limit Louisville to five singles in 4 1/3 shutouts, and the Aggies scored the go-ahead on a sacrificed fly in the seventh.

“I’m glad we won, but I’m really happy to see us win a game that’s not 15-7,” said Schlossnagle, who had a cooler of water poured over him as the team was celebrating outside the dugout. “I’ve been saying since the beginning of the year that you’re going to meet some great pitchers. It’s good to see us match that and play good defense.”

“I felt like it was an exercise in toughness for our guys,” said Hokies coach John Szefc, whose team bounced back from a 5-4 loss in Game 1.

TEXAS 9, EASTERN CAROLINA 8: The Longhorns came back from a five-run deficit to edge the Pirates on Dylan Campbell’s scoring single in the bottom of the ninth in Greenville, North Carolina.

Campbell also hit a game-breaking homer in the bottom of the eighth for the Longhorns, who entered the inning trailing 7-4.

“There’s a lot of fighting on this team,” Texas coach David Pierce said. “This team has proven that from the day we started it until now. We’re not going to back down, we’re not going to leave.”

OLE MISS 10, SOUTH MISS 0: The Rebels scored seven runs on five hits in the sixth inning en route to a 10-0 win over the Golden Eagles in Hattiesburg.

Dylan DeLucia and Jack Dougherty combined on the shutout, with DeLucia allowing four hits in 5 2/3 innings and Dougherty giving up no hits the rest of the way.

Peyton Stovall homered to start the Razorbacks’ fifth inning three-run, and Brady Slavens followed with the first of his RBI singles.