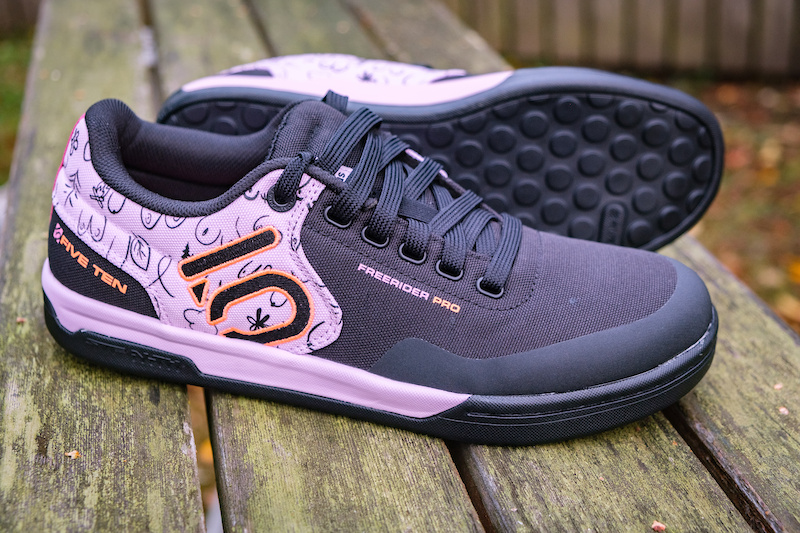 Knog has added an unobtrusive bicycle alarm and tracker called the costs to their line of bike accessories. The tiny device can be armed with the push of a button if the iPhone it’s paired to is within 5 feet, or it can be armed through the app if it’s within Bluetooth range of the phone. When armed, an 85 db alarm will sound if the bike is moved. If that doesn’t deter the thief and the bike is moved from its location, the device can be tracked with Apple’s “Find My” app through a built-in, non-removable AirTag.

The Scout Bike Alarm has a claimed operating time of 6 months (it’s rechargeable) and weighs just 25 grams. It also comes with a yellow silicone cover that can be used to announce its presence, or the cover can be removed to keep it inconspicuous. MSRP: $59.95.

The Five Ten Freerider Pro Canvas BCA Edition was created in collaboration with Vero Sandler to help raise breast cancer awareness and funds for breast cancer charities. In the UK and EU, $15 from every pair sold will go to Breast Cancer Now, and in North America that money will go to the National Breast Cancer Association. More information: adidas.com/breast_cancer_awareness

Dakine’s new Darkside shirt was apparently “inspired” by Thomas Vanderham. I don’t know if that means he was constantly complaining about having cold nipples, but either way the new jersey has a windproof front panel which should help keep the chest and shoulders warm when you hit the slopes on a beautiful fall day. The jersey is made of 100% recycled polyester and has 4-way stretch. It has a UPF 20+ sun protection rating and an antimicrobial treatment to keep it smelling fresh. MSRP: $90.

MilKit have a new tool on the way called the Hassle’off (it’s the Swiss/German humor that stands out). Full details will be revealed when it launches in November, but it’s essentially a small frame-mounted case containing 20 tools, including a tire plugger, multi-tool and chain breaker. The total weight is 140 grams claimed.

The Shelter Anorak has a 10k/10k water column/breathability, fully taped seams and a DWR coating to keep rain out. The generous front pocket can be used to hold peanut butter and jelly sandwiches, a spare pair of gloves, or whatever else you don’t mind having located right in front of you. This same pocket can also be used to fold up the jacket when not in use. MSRP: $189.99.

Dakine’s Builder Packs have been updated and there will be two versions of the popular tool carrier released in Spring 2023. The 40 liter version is the big dog, with the option to carry tools, saws or buckets of normal size. Exterior pockets have been enlarged to hold gallons of chainsaw bar oil, and daisy chains have been added to the exterior to help keep tools steady when hiking to the dig area. MSRP: $260

The 25-liter version is designed for trail projects accessible by bike or motorcycle, and can hold collapsible trail tools, such as those offered by Trail Boss. In addition to holding these tools, the central compartment is removable and can be used to store various power tools. MSRP: $220

Tech Week 2023 is your chance to catch up on the latest MTB components, apparel and accessories. Click here to view all related content.
Cancer chairities