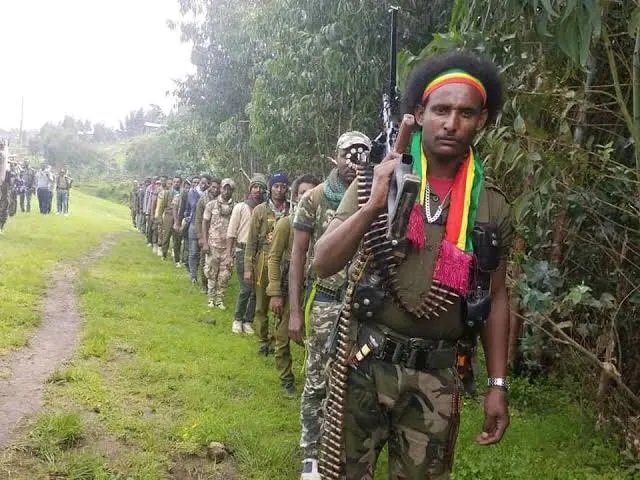 We, the leaders of the organizations listed below, stand in solidarity with the brave Ethiopian women who have been on a hunger strike in London over the past two weeks to expose the ongoing Amhara genocide in Ethiopia to the world, primarily in Oromia Regional State, Wellega Zone; Benshangul Gumuz area; and the northern Shoa areas of Amhara Regional State.

The brave activists were forced to go on a hunger strike

because the media and international communities have so far chosen to ignore the plight of the Amhara people, who are brutally murdered daily for who they are by the barbaric and genocidal Oromo Liberation Front Army (OLF-A ) which is also supported by some elements of the federal and regional governments.

Surprisingly, to date the British government and international media have failed to respond to the protests of these courageous and selfless activists. This is another testimony to the prejudice of Western countries and their media against the Amhara people who have not received the same treatment as the Tigre and Oromo terrorist extremists. We strongly condemn the partisanship of the Western media for ignoring these dedicated Ethiopians who are on hunger strike and some of whom are now in intensive care.

We also denounce the Ethiopian federal government for continuing the incarceration of the following Fanno leaders after the Amhara Regional State Supreme Court ordered their release on bail:

They are leaders who put their lives on the line, when the Ethiopian federal and regional governments mobilized them to defend Ethiopia against the terrorist aggressors of the TPLF last year. Now the federal government is hunting them down as it treacherously prepares for negotiations with the same group it declared to be a terrorist organization two years ago.

∙ The Ethiopian Federal Government must end the Amhara Genocide in Ethiopia now. ∙ The federal government must release political prisoners such as Tadios Tantu, Temesgen Desalegn and other journalists and prisoners of conscience.

3. The Amhara Association in Queensland, Australia

6. Communities of Ethiopians in Finland

11. Freedom and justice for Telemt Amhara

12. Global Alliance for Justice – The Ethiopian Cause