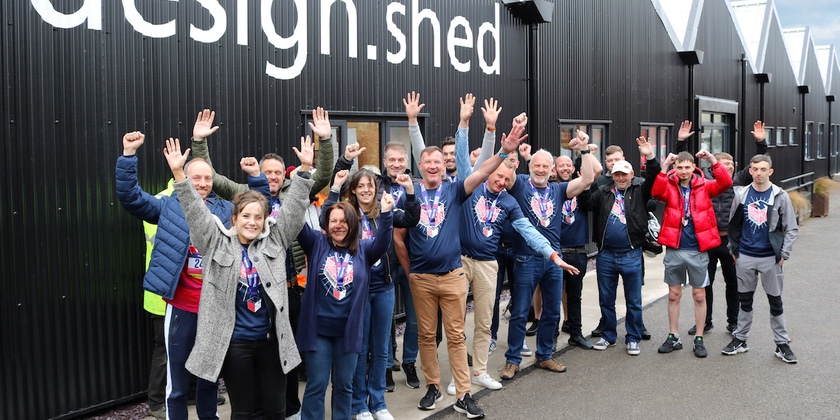 Mold-based P&A Group staff and representatives from the company’s main Polish supply partner have raised thousands of pounds after competing in the Manchester Marathon.

21 representatives from both companies tackled the 26.2-mile marathon earlier this month, raising more than £3,000 for the British Heart Foundation.

A personal best was set by Chief Financial Officer Andrew Baker, who completed the marathon in an impressive time of 03:10:34.

He was closely followed by one of P&A’s Polish suppliers who clocked a time of 03:14:58. Marathon novice Iwan Gwyn, manager of the Woodworks Garden Center, posted a time of 03:20:23 and Paul Haynes, key account manager at Zest, finished at 04:18:31.

18 P&A employees were running to raise money for the British Heart Foundation, which was chosen by employees as the charity of the year for 2022.

The British Heart Foundation, for which P&A hopes to raise £10,000 over the coming year, helps and supports 340,000 people living with heart and circulatory conditions in Wales.

Representatives from every division of the P&A Group attended the course, including eight members from Zest’s Saltney Garden Products Warehouse and Distribution Center. In addition, three management staff from its main Polish product sourcing partner attended as well as staff from the Woodworks Garden Center and the P&A Central Services team.

Runners were delighted to be joined by a mystery guest at the start line – P&A Group Chief Executive Steve Morgan, who ran the marathon wearing the costume of British Heart Foundation mascot Mr Hearty. Steve also carried two charity buckets, raising over £500 along the way, which was mostly in change!

Denise Matthews, one of the P&A runners, said: “I am delighted to have finished the Manchester Marathon. There was a great atmosphere and the crowd certainly helped keep the spirits up during the challenge! It was great to see so many of us participating.

“Although we will be in pain for the next few days, I am so proud of everyone for raising money for the British Heart Foundation.”

Steve Morgan said: ‘How could I not be in on the party? When I saw how many employees had signed up to take part in the Manchester Marathon, I knew I had to get involved too! It was a fantastic day and I was amazed by the generosity of people.

“It took me longer than expected to complete the marathon because so many people stopped me to donate money along the way.

“I’m very proud of the entire 18-person team, especially as it included many novice runners doing their first marathon and also seasoned runners looking to set a new personal best. Every division of the P&A Group was represented and we would all like to extend a big thank you to the people of Manchester, fellow runners, colleagues and the British Heart Foundation team for all their support.

All 18 riders received a warm welcome when they returned to the newly opened Design Hangar in Saltney on Monday April 4 to share stories and celebrate with colleagues with a well deserved cake!

The Manchester Marathon is one of many fundraising events P&A Group employees are getting involved with this year as they seek to raise money for the British Heart Foundation. It’s not too late to support the P&A team and anyone wishing to do so can click the link here.

Did you spot something? You have a story? send a facebook message | A direct message to Twitter | Email: [email protected]