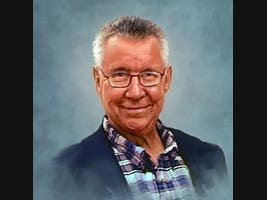 WALLINGFORD, CT – (From Wallingford Funeral Home) Gregory J. Samal, 75, of Wallingford died on May 26, 2022 at Masonicare.

Greg was born in Meriden on July 7, 1941, the son of the late John and Marguerite (Landry) Samal.

A longtime resident of Wallingford, he was employed for 43 years by 3M Purification Inc., formerly CUNO Inc., and retired in 2011.

At the time of his retirement, Gregg was Director of Supply and Transportation.

Prior to this role, he was responsible for customer service, transportation (export/import and public relations), including corporate meeting planning assignments, annual shareholder meetings, national sales meetings and international and other related functions.

Greg was a parishioner at Our Lady of Fatima Church in Yalesville since the parish was established in 1956 and has been active on various church committees as parish council chairman, 25th anniversary committee chairman, chairman of ‘Allen Organ Fund Drive, Head of the Parish Music Director Recruitment Team and Co-Chair of the Demetz Nativity Collection imported from Italy.

Long active in numerous charitable and civic organizations in Wallingford and Meriden, he was a member and past president of the Meriden Industrial Management Club and served as its president. Member of the Yalesville Volunteer Fire Dept. For 15 years he was also the organization’s secretary. He has chaired local United Way events with CUNO.

In 1961, Greg was Yalesville’s first Eagle Scout with the Yalesville Men’s Club sponsored Troop #27 and continued in his adult life in local Scouting activities as a Scoutmaster at Meriden Center Congregational Church for many years, also as camp commissioner in Deer Lake. Scout Reservation in Killingworth and District Round Table Commissioner.

In 1982, he was the recipient of the Silver Beaver Award for significant service in youth counseling. He was the first chairman of the Staffordshire Commons board for several years.

In 1977, he served as president of the Bicentennial Village on the shore of Wallingford Community Lake. A member of the Meriden Colonial Militia, he accompanied the group’s visit to Great Britain as part of the Queen’s Jubilee.

Among many hobbies, he loved the Christmas season above all else and was a renowned floral designer of commercial, religious, and residential venues throughout Connecticut, including commercial facilities, Catholic and Protestant places of worship, associations and civic sites.

Most notable were his handmade six-foot-diameter wreaths, made of white spruce with massive red velvet bows.

Greg loved Christmas and the whole season. He enjoyed decorating and bringing the joy of the season to others. Her wreaths and lights were beautiful and brought joy to many Yalesville homes.

Greg is survived by two brothers, Jeffrey Samal and Thomas Samal and his wife, Brenda; his niece, Alicia Samal, He is survived by many friends including Gail Benigini, Jim Reidinger, Brian Benigini and Kevin McNally.

He was predeceased by his brothers, John Samal Jr. and Brian Samal and his niece, Jennifer Samal.

Greg’s family will receive relatives and friends at The Wallingford Funeral Home, 809 North Main Street Ext. Wednesday, June 1, 2022 from 4 p.m. to 7 p.m. A salon service will be held at 6:30 p.m. during call hours.

Interment at In Memoriam Cemetery will be private. A Mass intention for Gregg will be said during the 9 a.m. Mass on Sunday, June 26, 2022 at Our Lady of Fatima Church.