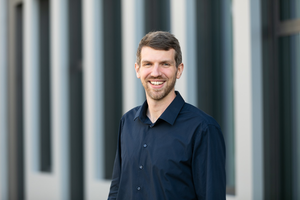 As a postdoctoral research associate in the lab of BTI faculty member Frank Schroeder, Max Helf saw his lab mates continually struggle when analyzing data. So he decided to do something about it and developed a free and open source application called Metaboseek, which is now essential to the work of the laboratory.

The Schroeder laboratory studies the roundworm Caenorhabditis elegans, one of the most successful model systems for human biology, to discover new metabolites that regulate signaling pathways conserved during evolution and could be useful as leads for the development of new pharmaceuticals or agrochemicals. Researchers accomplish this task by comparing metabolites between two different worm populations – a process called comparative metabolomics.

Since samples routinely contain more than 100,000 compounds, computational approaches are essential to perform the analysis.

The team was relying on software packages that did not provide the level of flexibility required to easily customize analysis settings. This limitation, and the lack of a proper graphical user interface, meant Helf’s colleagues were faced with the daunting task of visually inspecting mounds of data – for example, to spot possible false positives – and skipping among several other software tools to confirm and filter out those that didn’t make sense. results.

“It just seemed very inefficient to me, and I couldn’t overcome the shortcomings of other software solutions for this problem,” Helf said. “I thought there had to be an easier way, so I started writing code for my own software.”

Helf developed the initial version of its software in 2017 and continued to improve it over the next two years. “In addition to solving problems my lab mates were already facing, I talked to them about what else was holding them back – things they wanted to do but weren’t even trying – and built those features into application,” said Helf, who is now a bioinformatics product manager at proteomics company Biognosys AG. “I wanted this new tool to be user-friendly and accessible to anyone doing chemical biology.”

The result was Metaboseek, an application with a graphical interface that integrates several data analysis tools that non-coding researchers would not otherwise have. The app streamlines the analysis of comparative metabolomics data by helping the researcher determine which features of the data are real and allowing them to drill down into those features, all in the same tool.

“Max did it without me even asking,” Schroeder said. “Before I knew this was happening, there was Metaboseek. We started using it, and now our lab and many collaborators could not exist without it.

In a study published in Nature Communication on February 10, Schroeder’s team provided the proof of concept for Metaboseek by applying it to an important pathway of fat metabolism that had not yet been studied: the α-oxidation pathway in C.elegans which helps break down a class of fatty acids.

Using Metaboseek, the team found that roundworms lacking a key gene in the α-oxidation pathway accumulated hundreds of previously unreported metabolites. The results are important because α-oxidation is a basic biochemical pathway in worms that is conserved in humans, Schroeder said.

“Bennett Fox did the chemistry work, so this study was a nice collaboration between the two post-docs,” added Schroeder, who is also a professor in the Department of Chemistry and Chemical Biology at Cornell University.

According to Schroeder and Helf, there are several reasons why there aren’t many good analytical tools for comparing metabolomics data. First, comparative metabolomics is a relatively young field compared to other data-rich areas of biology like genomics (which focuses on DNA) and proteomics (which focuses on proteins), so there was not enough time to develop software tools and database infrastructure. .

Additionally, over the past decade, the advent of affordable ultra-high resolution mass spectrometers for collecting metabolomics data has perhaps more than increased the amount of data a sample can generate – creating a need even greater sophisticated tools that can keep up with the flood of data.

Metaboseek meets these needs with an array of features to analyze various types of data to aid in compound identification, structure determination, assignment of metabolites to families based on structural similarities, tracking of radiolabeled compounds, and more. .

The study was supported in part by grants from the National Institutes of Health (R35GM131877 and U01GM110714) and a Helf research grant received from the Deutsche Forschungsgemeinschaft (project number 386228702).

About the Boyce Thompson Institute:

Opened in 1924, the Boyce Thompson Institute is a leading life science research institution located in Ithaca, New York. BTI scientists investigate basic plant and life science research with the goal of increasing food security, improving environmental sustainability in agriculture, and making fundamental discoveries that will improve health. human. Throughout this work, BTI is committed to inspiring and educating students and providing advanced training for the next generation of scientists. BTI is an independent, not-for-profit research institute also affiliated with Cornell University. For more information, please visit BTIscience.org.

The title of the article

Comparative metabolomics with Metaboseek reveals functions of a conserved pathway of fat metabolism in C. elegans

The authors declare no competing interests.

Warning: AAAS and EurekAlert! are not responsible for the accuracy of press releases posted on EurekAlert! by contributing institutions or for the use of any information through the EurekAlert system.