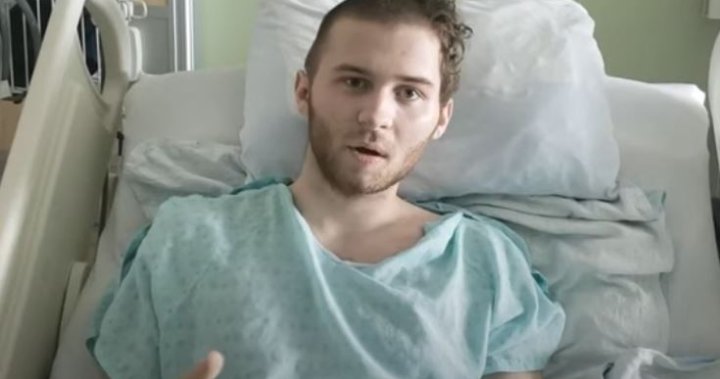 People try to find inspiration wherever they can, and for high school students Sara Del Vecchio and Katrina Laforce of Lakeside Academy in Lachine, Ryan Ross is someone to look up to.

Ry, as his family calls him, is a patient at the Royal Victoria Hospital in Montreal where he is receiving treatment for testicular cancer.

“From what I’ve been told, it just went up in my brain,” he told Global News from his bed in the hospital.

Ross, a student at John Abbott College, is 18 and said the news of the diagnosis stunned him.

“When [the doctor] said I had cancer, I mean it hits you,” he explained.

“There are no words to describe this feeling because of the impact this word has.”

It’s been five weeks since Ross’ world was turned upside down. Although it was stressful for the family, his mother, Andrea Scouten, noticed a change in her son.

“I don’t know where it comes from,” she said, smiling. “Honestly, we have no idea.”

She said her positive attitude lifted the family’s spirits.

Now Ross is trying to convey that confidence in a set of videos on YouTube and he hopes others will find hope in his posts.

“Maybe a child in a hospital bed, in a hospital gown [like me] with my hair falling out from the chemo I’m doing, in the exact same position and not knowing how to go about it, I can see how I’m doing,” he pointed out.

He added that the videos also aim to raise awareness of testicular cancer, which Ross’ doctor, oncologist Raghu Rajan, says is the most common cancer in young men.

“It’s actually becoming more and more common over time,” he pointed out. “People don’t really know why, but it’s increasingly being recognized. The success rate has not worsened. It is a very curable cancer.

Thanks to Ross’ videos, Del Vecchio and Laforce now know.

“He really opened our eyes and made us realize that this is a serious issue that men have to deal with,” Laforce said.

They were inspired to raise money to donate to a testicular cancer charity in Ross’s name.