Marathon runner closes in on $500,000 raised for childhood cancer charity – The Royal Gazette 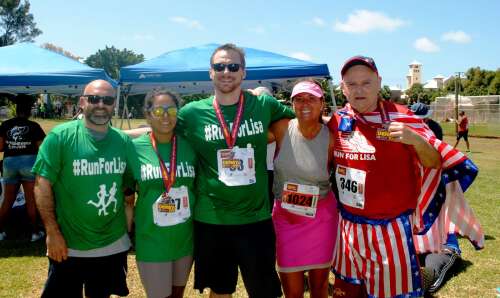 A labor of love by an insurance executive who lost his wife to cancer is approaching half a million dollars raised for research into the disease.

Kevin Maloney, who organized events in Bermuda to raise money for St Baldrick’s Children’s Cancer Foundation for six years in memory of his late wife Lisa, said he was stunned and humbled by the support.

Mr Maloney added after crossing the finish line of the Bermuda Half Marathon Derby today: “We are very close to this big milestone and we have raised almost $65,000 this time.

“Our goal was $75,000 – we’re a little shy, but we expect more money to come in and hope to break the half million mark next year.”

He added that more money could come from the Bermuda Day race as many donors also worked for companies that matched funds raised for charity, which could push the prize pool up to 75. $000 or more.

Mr Maloney, senior vice president of Allied World in New York and a regular business visitor to the island, was speaking after he and three friends completed the race in around two hours and 45 minutes in their t- special #RunforLisa shirts.

He said Ms Maloney, who died in 2016, had been a huge supporter of St Baldrick’s, which raises money in Bermuda through a sponsored head shave every year.

Mr Maloney added: “What we have raised is beyond my wildest dreams. I know Lisa would have been so happy and proud and the support we have received from Bermuda is amazing.

“When I heard Bermuda singing his name, it filled me with joy and I burst into tears. Every year he seems to get bigger and better.

Mr Maloney, 57, said he felt fine after the grueling race, in conditions that were hotter than his usual January event.

But he added: “My wife is guiding me through this and we are doing this for a very good thing – childhood cancer research.”

Mr Maloney was joined in the race by friends Matt Hansen, who works for Allied World’s operations in Bermuda, his wife Christy, who works for insurance company Aon on the island, and Michael Almskog, from insurance claims administration company Envoy Specialty in New York.

Mr Almskog said: ‘The crowds were very nice as they always have been – they noticed our shirts.

Mr Maloney, who ran in Stars and Stripes shorts and an American flag cape, said he and his supporters were running normally at the Bermuda Triangle Challenge in January.

But the race was again canceled this year due to the Covid-19 crisis, so they decided to tackle the half marathon instead.

Mr Almskog said the team, despite missing trips to the island because of the pandemic, had managed to cover similar distances remotely to raise funds in the United States.

#RunForLisa: from left, Matt Hansen, Christy Hansen, Mike Almskog, USA supporter Una Hayden, who ran the relay race with her husband Doug, and Kevin Maloney after their half marathon to raise funds for research on childhood cancer (Photograph by Raymond Hainey)

Ms Hansen, who led the team to the finish line in their first half marathon, said: ‘Matt and I have been running for Lisa since 2018 and Kevin really brings the crowd with him – he has so much energy positive.

“I loved it. It’s such a good crowd. They really keep you going – and the music was great too.

The foundation’s first fundraiser took place at an Irish bar in the city on St. Patrick’s Day a year later.

The charity has handed out $314 million in research grants since 2005 and its fundraising events, including its famous sponsored head shaves, now take place around the world.