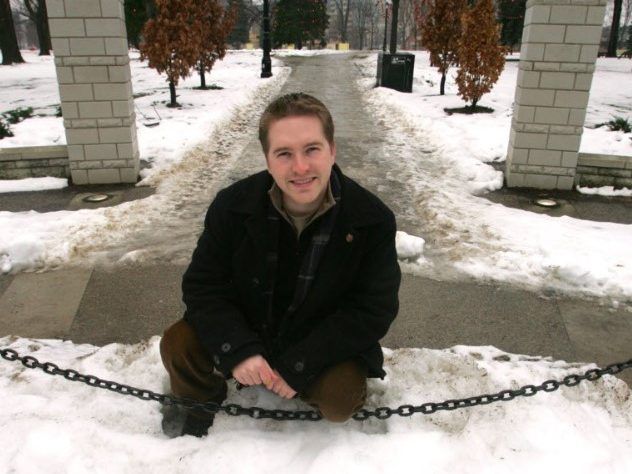 It was largely just a footnote, albeit an important one, but Josh Morgan’s first foray into mayoral politics was covered as part of our work on the municipal elections in 2006 in London. Who would have guessed that Morgan, then 28, would become mayor 16 years later? This story first appeared in the Tuesday 14 November 2006 editions of the London Free Press:

Sign up to receive a curated collection of links and highlights from our award-winning news coverage, in-depth analysis and unrivaled weekday noon investigative features.

The next issue of LFP Noon News Roundup will soon be in your inbox.

Five newcomers won seats on London City Council last night, shifting the balance of power from right to left and possibly ending a period of booming developments despite concerns over urban sprawl .

The most notable changes have occurred within the city’s Board of Control and in the northwest corner of the city, Ward 7, where a proliferation of big-box stores and new housing developments have replaced farmland.

Longtime NDP activist Gina Barber won the second most votes among comptroller candidates and knocked out nine-year-old comptroller Russ Monteith. While Monteith was the most moderate of a council that leaned heavily to the right, Barber will be as far left as any council member.

“I’ll be looking to highlight those kinds of issues that a lot of people have told me are important, about all the development on the outskirts of the city and that we’ve neglected major infrastructure elsewhere,” Barber said.

Rookie candidate Walter Lonc, the only other challenger to beat an incumbent, will also be likely to move the board to the left. Longtime president of the Old Masonville Ratepayers Associations, Lonc defeated three-term adviser Ab Chahbar.

Chahbar was a strong proponent of growth, part of a board group that argued there was a need to introduce a new valuation.

Lonc seems to bring a different perspective, as evidenced by his campaign website: “Urban growth does not pay for itself, so we need to look at development to see that it is responsible and has minimal impact on the environment. environment.”

Other new faces are Stephen Orser in Ward 4, Nancy Branscombe in Ward 6 and Paul Hubert in Ward 8, who won the narrowest margin of the evening, beating Josh Morgan by just 23 votes.

Hubert and Branscombe presented themselves as moderates who would seek compromise on the board, while Orser is more of a free agent whose opinions are harder to predict.

Here is how the new council is taking shape politically:

If the newcomers keep their election promises, it seems that the days of the control council are numbered. Seven returning board members want the board removed, as do Barber, Orser, and Lonc.

But not everyone on the left benefited from the change on the council – left behind were the challengers backed most strongly by progressive citizens’ group Imagine London.

It was Imagine London that pushed to double the number of wards in the city from seven to 14, leading the Ontario Municipal Board to order the change. The hope of some at Imagine London was that smaller neighborhoods would benefit candidates with strong ties to neighborhood associations, people whose politics were left of centre.

But the three challengers favored by Imagine London lost in districts without holders: Stephen Turner in district 6, Greg Thompson in district 4 and Monica Jarabek in district 8.

In a midfield starting battle, Judy Bryant easily won Ward 13 against Sandy White, who blamed her defeat on Imagine London and organized labour.

“(They) made it clear to me that they were going to beat me,” she said. “You never know until the votes come in, (but) I’m not surprised.”

Branscombe was the only candidate in three open neighborhood races to walk to a relatively easy victory.

“I hope to work with this new team and bring new approaches,” Branscombe said.