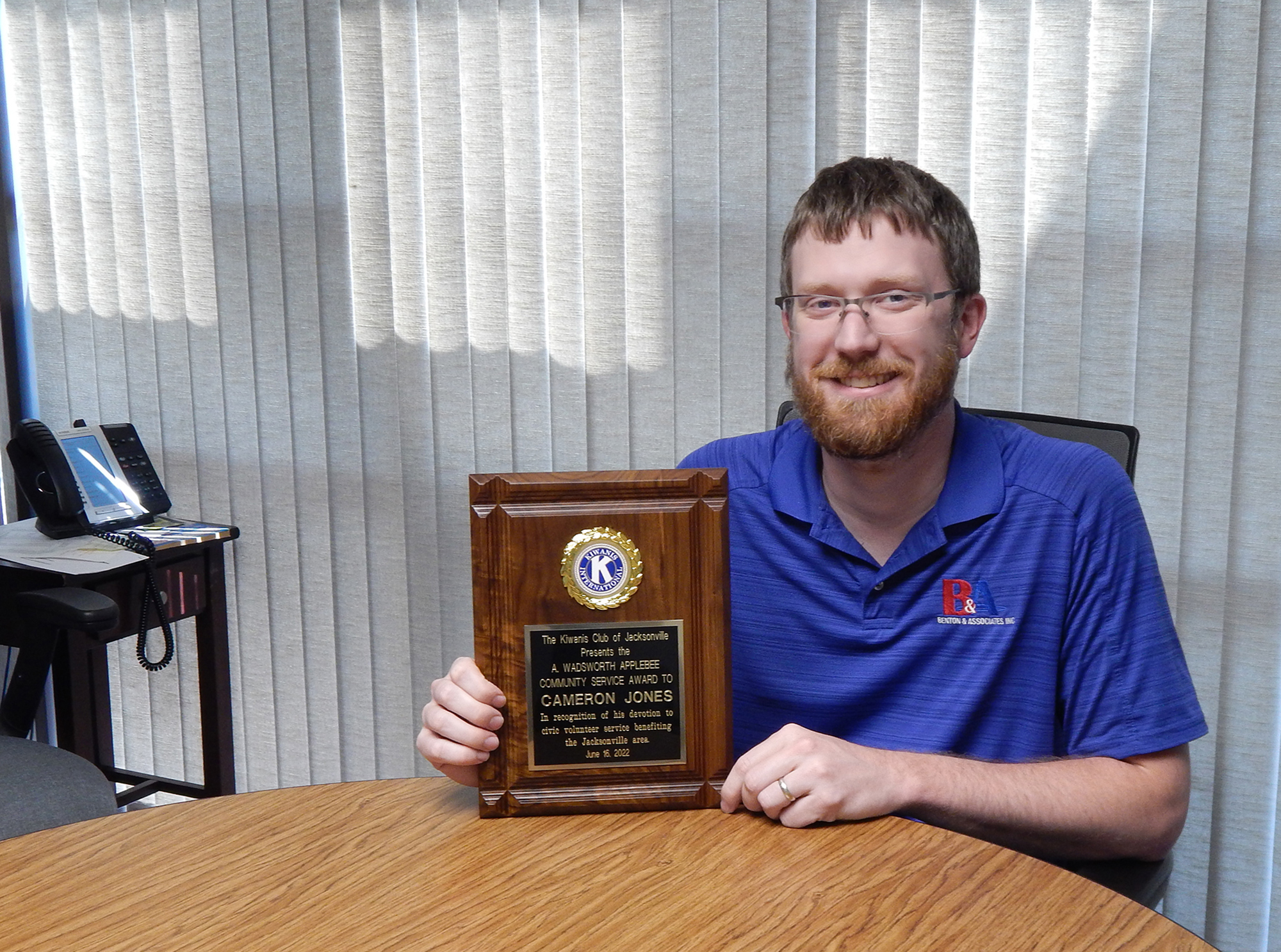 A Jacksonville man’s continued support of his community has earned him recognition from the Kiwanis Club of Jacksonville.

Applebee “has been one of the movers and shakers of our club for many years,” said awards committee chair Keith Bradbury, noting that nominees don’t need to be Kiwanis members.

“It’s about what you’ve done, not just for Kiwanis but for the community,” he said.

Jones, who is not a Kiwanis member, said he was surprised by the honor.

“I had no idea,” he said. “…Keith Bradbury came into my office and sat down and told me.”

He’s still not entirely sure what it was that his volunteer resume was that caught the committee’s attention, he said.

Bradbury “just said it was a cumulative volunteer effort over many years,” Jones said. “I tried to do my best. … It’s easier to be active in some parts of life than others.

Much of the committee’s choice of Jones had to do with two of his main volunteer efforts, Bradbury said.

“He’s extremely active in the church,” Bradbury said. “Plus the board. They’re about as opposite as they come and he’s knee-deep in both.

Jones, who attends Jacksonville Bible Church, is probably the most active in his church and with the Morgan County Fairgrounds board, he said, although he has also been involved in the Jacksonville Area Chamber of Commerce and various other organizations.

How many hours he spends volunteering is anyone’s guess.

“I don’t keep any record of it,” he said. “Different times of the year require different amounts of time. I have no idea. I think sometimes it’s good, if you don’t follow up. The goal is not the number of hours you spend, but the result.

Jones says he’s slowed down a bit in recent years, as he and his wife, Sarah, now have two young daughters, Jane, 3, and Aliza, 1½.

With volunteering in his family — his parents and grandparents, the Joneses of Jones Meat and Locker, were all “very active in the community,” he said — it’s possible his children will follow in the footsteps of their father.

“We try to (involve them) as much as possible,” he said. “Some things lend themselves to small children; Others don’t. Everything is a balance.

And, even though his family needs more of his time off these days, Jones always tries to give back to his community and others through his work designing and developing water and utility infrastructure projects. wastewater as an engineer at Benton and Associates.

“Whether it’s drinking water or wastewater, I try to serve the communities (by offering them) the best options and situations to serve their customers, protect the environment and have infrastructures that are resilient to long term,” Jones said.