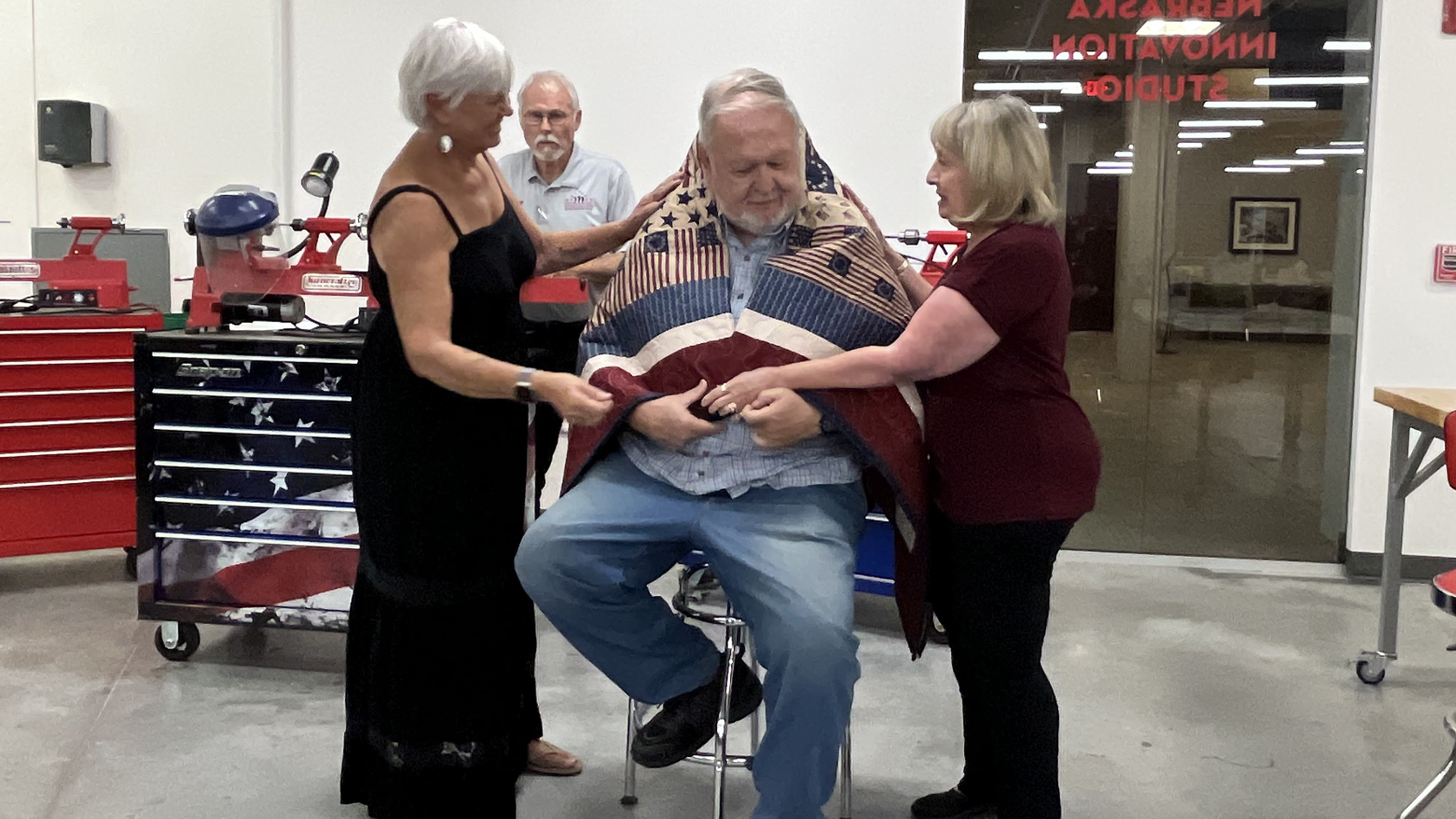 Jim Young was enveloped in gratitude and honor for the many lives he touched – including hundreds of veterans – when he received a Quilt of Valor during a July 29 presentation at the Nebraska Innovation Studio from the University of Nebraska-Lincoln.

During the presentation, Young was accompanied by his sister-in-law, Pat Young, and his wife Victoria, and seated near the same lathes, he spent countless hours on his feet training veterans in woodturning. These are lessons that also serve as therapy, helping veterans heal.

“If I can get a veteran to come here and make a pen, he’ll spend 30 to 40 minutes focusing on one thing, not thinking about all the other stressors he has,” Young said. “It’s very positive for them, and as they become more skilled, they can share those skills with other veterans. They gain confidence in their relationships with people.

“A number of veterans came out of their shell, so to speak, and were then able to return to school or return to full-time work.

A veteran himself, Young helps others through Veterans in Recovery, a program he started in partnership with Nebraska Innovation Studio. He and his wife moved to Lincoln in 2016 to be closer to their son, Brandon, an on-campus information technology services employee, and his growing family. It was Brandon who told his father about the Innovation Studio, since Young had previously volunteered for a veterans woodturning program in San Diego, California.

Young visited Innovation Studio in 2017, where director David Martin and assistant director Jerry Reif were receptive to hosting a similar program. After gaining buy-in from some area veterans groups and the United States Veterans Administration, Young launched the program in January 2018.

He has since become a well-known face at Innovation Studio, spending three or four days a week working with veterans. The program partners with Innovation Studio and is made possible through the philanthropy of a generous anonymous donor, who pays for veterans’ memberships and the supplies they need to carry out various projects. It equips veterans with new skills while helping them recover from post-traumatic stress disorder, traumatic brain injury, substance use disorder and more.

Doug Kapke, a U.S. Army veteran from Fairbury, Nebraska, has been a van driver for the Jefferson County Veterans Services Office and has been bringing veterans to the studio to work with Young for several years. He nominated Young to receive the Quilt of Valor honor because he saw and experienced the impact of the program firsthand.

“I’m fortunate to live in a county that values ​​our veterans, so I drove veterans here and that’s how I got involved with the project,” Kapke said. “Instead of waiting in the van, I was invited in and I’m working with the guys. It’s been very successful.

In his remarks, Reif said 227 veterans have benefited from the program, with an average of 30 participants in any given month. Some started the program in January 2018 and continue to participate.

“These are just numbers of course,” Reif said. “For some of these veterans, the experience has changed their lives. For some, it saved their lives. I have been fortunate to see the transformation of some of our veterans firsthand.

“From the beginning, Jim has been the heart and soul of this program… (He) has shown his own brand of focus, patience and creativity, and he has changed lives in the process.”