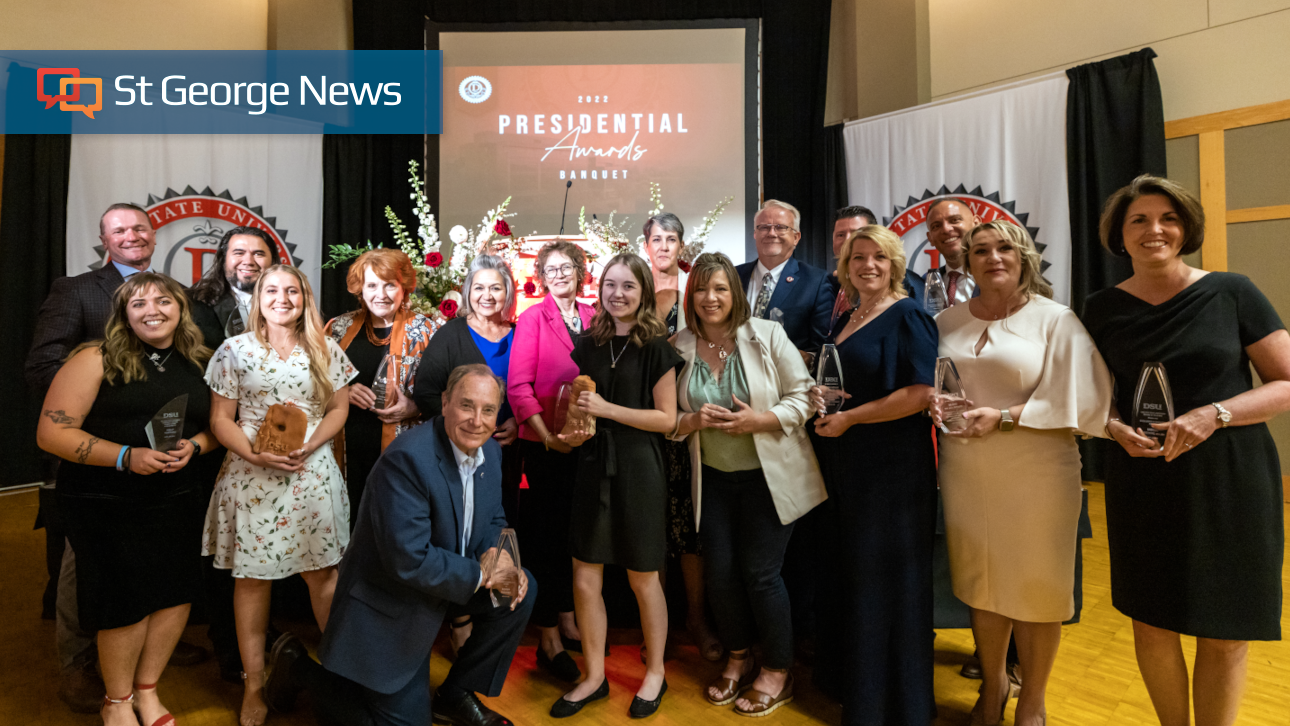 Lil Barron-Barnes, Director of Sponsor Relations for the Huntsman World Senior Games, received the Committed Community Partner Award. In addition to volunteering for the Senior Games since 1996, she has served on numerous boards, committees and clubs in the community.

DSU assistant professor of physical therapy, Dr. Nicole Schneider, who has taught at the university since 2018, received the Community Engaged Scholar award. Schneider was instrumental in the university’s Go Baby Go program, which retrofits battery-powered cars to function as electric wheelchairs for area children with special needs.

Mike Nelson, Deputy Director of DSU’s Center for Inclusion and Belonging, received the Community Engaged Staff Member award. In addition to helping students at the center and advising the student union on multicultural inclusion, Nelson volunteers at the Switchpoint Community Resource Center.

Holly Hurtado, Vice President of Service for the DSU Student Association, received the Community Engaged Student award. Involved in service since she was 14 and with the DSUSA service branch for three years, Hurtado has completed more than 1,000 hours of service with the university alone.

Danny Ipson received the Community Engaged Alumnus Award. Ipson, who has served on the National Advisory Board, Board of Trustees, and Board of Directors for the DSU Foundation, also coached baseball at Dixie High School for 25 seasons. In addition, he serves on the Customer Advisory Board of Zions Bank and as Vice Chairman of the Board of Ambest Inc.

Cantrell taught secondary science methods courses at DSU for five years and during that time secured two major grants, helped establish the STEM Education Center, and developed graduate courses for the endorsement program STEM for teachers. In her current role as vice-rector for academic and budget planning, she has overseen the development of 94 academic programs.

Rosenberg, DSU’s Executive Director of Human Resources since 2015, has chaired and presented at numerous local, state, regional, and national human resources conferences, in addition to serving in various leadership roles within DSU and DSU staff associations. Utah Higher Education and Utah College and University Professional. Board of Directors of the Association-Chapter RH.

The Board also honored Brenda Armstrong, Robert Flowers and Jonathan Morrell with Excellence in Education Awards.

Armstrong, who currently serves as chair of DSU’s dental hygiene department and has taught at the university since 2013, implements service learning in her teaching and has partnered with community health champions. dentistry to help students develop professionally.

Morrell, who came to Dixie State as director of TRiO-Upward Bound in 1988, helped secure more than $16 million in scholarships and mentored many students as director of the TRiO-Student Support Services program. Additionally, he taught as a part-time instructor for 33 years.

Draper, the operations manager of Cherish Families, organized the Short Creek Community Alliance in Hildale. She is also president of the Creek Valley Health Clinic, president of the United Effort Plan Trust, member of the board of directors of Short Creek Health and Recreation, treasurer of the Short Creek Community Center, chair of the board of directors of the Utah State Disabilities Advisory Council and member of the State Interagency Coordinating. Advice.

As an obstetrician-gynecologist, Welsh cared for women of all ages in a variety of ways for more than 24 years at St. George in addition to mentoring medical students. Additionally, she was a Girl Scout Leader for 13 years, serving as the Service Unit Director and providing medical care at community events.

Also at the banquet were two honorary doctorate certificates, which were also to be recognized at 111and Launching ceremony on Friday, were awarded to John Brent Hunt, posthumously, and Gary Stone.

Hunt, founder and CEO of Soft Cell Biological Research, discovered and developed methods to study the dark microbiome. In addition to founding new companies and establishing laboratories, he developed a patented protocol, connected with people suffering from chronic diseases, established a working relationship with the University of Oxford. He passed away in 2020, but his legacy lives on in Soft Cell’s work today.

Before being named COO of Intergalactic in early 2022, Stone was an institution within Intermountain Healthcare for nearly a quarter of a century. Beginning his career as a registered nurse in the 1990s, Stone led the development of Intermountain Precision Genomics in 2014 to personalize healthcare to the individual down to the DNA level.