Social media offers brand owners both opportunities and risks that must be carefully managed if a brand is in the 21st century.NS Century.

With internet users Spend an average of 2 hours 25 minutes a day on social media It is fertile ground for brands that want to increase their visibility, engage with “trending” topics and themes, and connect with consumers.

The relatively inexpensive nature of social media advertising has also led to a shift from marketing strategies that were primarily aimed at increasing sales (previously essential to secure the costs of a large-scale poster campaign) to targeted ones in promoting brand awareness.

However, the 24/7 presence created by social media also increases the vulnerability of brand owners to bad advertising.

For example, since I started working as a Chartered Trade Mark Attorney, I have been able to relate numerous messages about overzealous cease and desist letters sent to a comparatively smaller party on behalf of a large corporation and the PR implications of such actions.

I previously wrote an article on this subject in relation to Hugo Boss.

This vulnerability was further highlighted earlier this year when Marks & Spencer initiated legal proceedings against competing supermarket Aldi for alleged infringement of its Colin the Caterpillar brands, without foreseen how the dispute would develop on social media.

Trademark owners would therefore mistakenly believe, when making decisions about the enforcement of trademarks, that judgments are limited to the traditional courts. Social media allows everyone to have an opinion and share it in no time. Legal strategies should therefore no longer exclusively concern issues of confusion, dilution and free-riding, but also the perception of all actions by consumers.

Colin versus Cuthbert: a case study

In April 2021, Marks & Spencer opened a lawsuit against Aldi in the High Court alleging that the supermarket’s “Cuthbert the Caterpillar” cake design infringed their registered trademark for “Colin the Caterpillar” and rides on the skirt laps of their reputation.

Although the case was still in its infancy and the details available were limited, media hype ensued, staged by Aldi and largely played out on Twitter.

Instead of making an official statement on the situation, Aldi used social media on April 15 to publicly comment on the court’s lawsuit with a tweet inspired by M & S’s well-known slogan:

On the same day, the hashtag #FreeCuthbert was trending on the platform and had collected tens of thousands of tweets from consumers within a week. 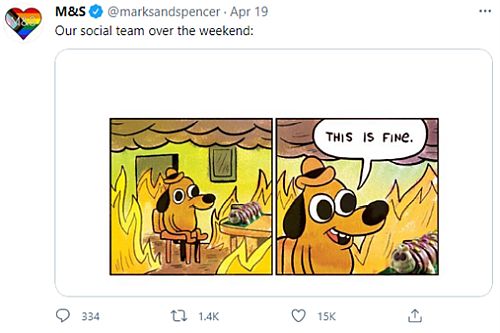 While this situation may seem quite trivial at first glance, it shows a number of problems that need to be resolved.

How every company has dealt with the situation on social media

This case shows two opposing approaches, one of which has been very successful in engaging consumers, improving their brand perception online, and generating positive advertising.

Aldi took the first step with a short, ironic comment and the creation of a hashtag that allowed consumers to get involved in the dispute and the topic became publicly known in a short time. In contrast, M & S’s four-day silence provided Aldi with an opportunity to control the narrative surrounding the matter and gain public support.

After the first microphone drop comment, Aldi then rode the wave by increasing its social media output on April 16 and posting 11 tweets using the hashtag.

The nature of these posts varied from directly criticizing M&S (“Marks & Snitches more like. #FreeCuthbert”, retweeted over 31,000 times) to building relationships with other competitors against M&S ​​(“Cecil, Wiggles, Curly, Clyde. We got you. “). @Waitrose @Sainsburys @Tesco @Asda #FreeCuthbert “which is an allusion to the caterpillars of these parties) and create humorous content around the character” Cuthbert “: – 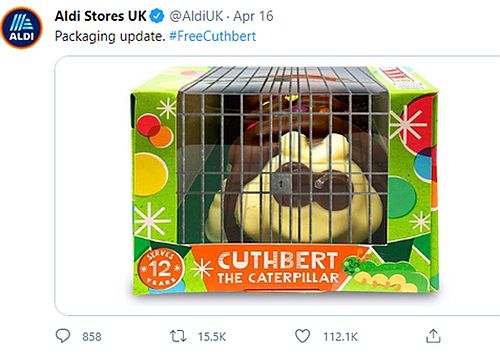 Aldi’s marketing strategy then evolved when they announced they would be bringing back a limited edition Cuthbert the Caterpillar cake and donating all profits to cancer charities.

Aldi introduced a new hashtag, #CaterpillarsforCancer, and publicly contacted M&S about the campaign to invite them to participate in the initiative.

However, instead of continuing their strategy of silence, M&S issued the following response, which misjudged the public mood and led to significant criticism:

M&S has been accused of being loveless, even though Colin the Caterpillar was an integral part of the company’s partnership with cancer aid Macmillan.

Companies’ handling of the issue on social media had an impact on consumer perception of the brands and their reputation. While consumers loved Aldi’s reaction, there have been particularly negative reactions regarding M&S: 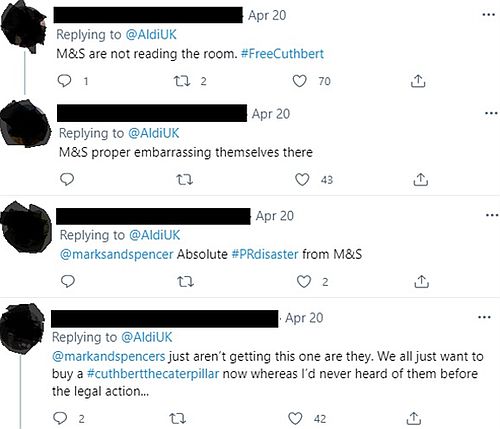 Aldi’s handling of the situation is a masterclass in PR – she turns an argument where they can be determined to have acted unlawfully (to be decided by a judge) into a marketing opportunity where her responsive, relevant and reactive strategy clearly stands out which stands out from M&S more traditional, more formal and potentially more contactless PR approach.

Aldi’s reaction made the claim almost ridiculous, so that the dispute from the consumer’s point of view, regardless of the further legal outcome, has already been largely settled in favor of Aldi.

Why this case caught the public eye

This dispute begs the question of why consumer reaction has been so strong in this case compared to others (after all, it’s not the first time Aldi has been a defendant in an IP lawsuit).

On the one hand, the publicity risks in this matter are likely to have been greater because the controversial product, a caterpillar-shaped cake, is far more conspicuous than a pack of salmon or a bottle of hair oil.

Caterpillar cakes have been an icon of British birthday parties since the 1990s, making them popular with consumers. It is therefore inevitable that such a product, when it is the focus of a dispute, will generate public interest.

Second, Aldi’s response was helped by the fact that the controversial product is a character that can be easily personalized to create a social media narrative that resonates with consumers.

This enabled Aldi to create the hashtag #FreeCuthbert to reach out to M&S to ask if “Colin and Cuthbert [could] be besties? ”and launching Cuthbert’s charity skydive in ways that would have been impossible if the dispute involved virtually every other product.

With my trademark attorney hat on, I have to admit that while scrolling through the social media comments I got slightly jaded – not just on the Colin v Cuthbert affair, but also in the following Aldi posts (with a clothing campaign with the slogan “JUST” DONE IT ”and a range of McDonald’s-inspired products, including a“ Big Stack ”).

As much as I appreciate the importance of trademark protection, it seems an inescapable reality that “lookalike” and “copycat” products are popular with consumers.

This is reflected not only in the success of Aldi (named “Favorite Supermarket” at the Good Housekeeping Food Awards 2019 and 2020, which were voted by the British public), but also in research.

A British study by Qing Wang of Warwick Business School and Paurav Shukla of Glasgow Caledonian University London (published in 2013) found that consumers react positively to products that are similar to those of the competition, which in turn influences their purchasing decisions.

In particular, Professor Wang noted that “highlighting the similarity between competing products in marketing communications is one positive effect on consumer confidence in voting“.

Given Aldi’s inherently risky business model (which is based on offering private label products that mimic or evoke the goods of other parties), we might interpret their decision to tackle the dispute with M&S head-on, the public domain as an ingenious way not only to appeal to consumers, but to deter other trademark owners who may be interested in making IP claims against them.

Does this all mean that brand owners should be afraid to take legal action against counterfeit products?

Social media offers so many branding opportunities that protecting intellectual property remains as important as ever to differentiate your goods / services.

In general, trademark law exists to protect companies and their assets, and parties should not be afraid to appeal if they believe their rights have been violated.

However, it should not be overlooked how such a dispute might play out on social media or how it might be perceived by consumers, and companies should therefore consider PR considerations when taking legal action.

For example, is the nature of the product such that the dispute could be particularly controversial? If the other party turns to social media to post the claim, how are consumers likely to react? Does the other party have equivalent resources or could your approach be perceived as clumsy? Synergies between legal and PR decisions are therefore essential.

The future for trademark disputes

In many ways, Colin v Cuthbert appears to be a unique case, as it represents a “perfect storm” of Aldi’s growing popularity, consumer attitudes towards “doppelgangers,” an iconic controversial product, and two opposing reactions on social media.

While the risks of social media, in and of themselves, shouldn’t deter brand owners from preventing the illegal activity of others, they should always be considered in order to guide and inform the battles a company is trying to wage.

Nonetheless, it should also be remembered that the fast pace of social media means a changeable environment and brands often have the potential to recover almost as quickly as they were damaged. Companies should therefore weigh the potential value of the infringement suit against the likely only temporary damage to reputation.

This article was first published on the. released CITMA website on July 20, 2021

The content of this article is intended to provide general guidance on the subject. Expert advice should be sought regarding your specific circumstances.