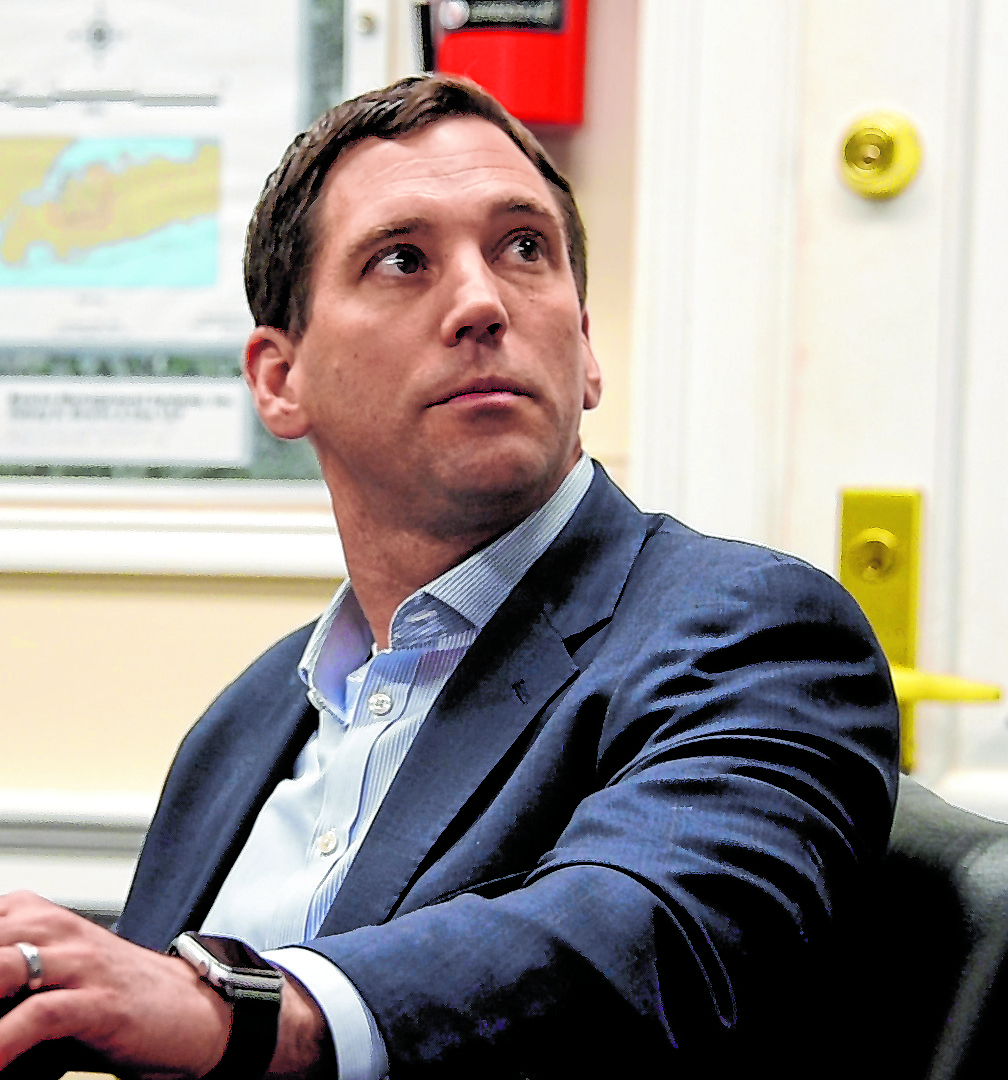 As if things weren’t busy enough at North Shore University Hospital in Manhasset, there has been ongoing construction work over the past two years that will continue through 2023. This will improve operations, but will also cause disruption on the adjacent busy Community Drive.

Will Corrigan of East Williston oversees substantial non-clinical operations as Associate Executive Director of Hospital Operations. He is in charge of construction projects and appeared at the April meeting of the Council of Civic Associations of Greater Manhasset (Grand Council) to provide an update on the ongoing construction of the Petrocelli Surgical Pavilion. This free-standing seven-story addition is the largest current project on campus.

Corrigan mentioned the February fire at the lodge to which 14 fire departments responded, led by the Manhasset-Lakeville Fire Department (MLFD). As a thank you, the hospital treated 10 MLFD team members to an Islanders game “just to thank them because they were amazing,” Corrigan said.

He noted that he was on the scene during the fire, doing his evening rounds and checking on night staff. The fire is believed to have started in one of several temporary wooden “cabins” erected by the construction company as rest rooms for its workers. It burned for about two hours and there was extensive smoke damage on three floors, he said.

The hospital hired a company to provide 200 workers to clean the entire pavilion.
“We hope not to waste time [in construction].” He continued. “We are in the final stages of finalizing the remediation plan.”

Construction, Corrigan told Manhasset Press, is expected to be completed in April 2023 with occupancy the following September.

Long in the works
Corrigan said there were plans to build a pavilion at the start of this millennium, but they never materialized.

“What we are building now started in 2016 and was approved, but unfortunately it was in litigation for about a year between 2018 and 2019. The Greentree Foundation [whose property adjoins the campus] were unhappy with some of the designs facing their property, which is why it remained in limbo. All of that was cleaned up in early 2020 when we actually got permission to start construction,” he said.

Of course, the pandemic hit and delayed groundbreaking until May 2020
The pavilion will have 18 operating rooms, three of which, per Corrigan, are hybrid operating rooms. According to a website, such a room “is an advanced procedural space that combines a traditional operating room with an image-guided interventional suite. This combination allows for very complex and advanced surgical procedures.

“It really is an upgrade to the facility,” Corrigan asserted. “Some of our operating rooms were built in the 1970s, and they are undersized for the complexity of the operations we perform. They don’t have all the capabilities of a new operating room.
He added that the hospital will remove 13 operating rooms in the main building to build a larger recovery area, so the net gain will be five rooms.

“It’s a refresh and update of capabilities to provide a more efficient workflow for our clinicians,” Corrigan summarized.

In addition to the surgical suites, the pavilion will have 132 intensive care beds, which, taking into account the transfer of all these beds from the main building, gives the campus a net increase of 38 beds.

“They will be important for when the next pandemic hits,” someone pointed out.
“Exactly,” Corrigan replied, adding that the hospital had sunk $15 million to provide the ability to “look completely negative.” [in the building]. We would circulate all the outside air, which in normal times you wouldn’t—it’s not efficient, it’s not good for the environment—but in a pandemic, and particularly an airborne pandemic , having the ability to do this adds a layer of protection for our staff and our patients.

Percussive
Anyone familiar with Community Drive in Manhasset knows to avoid it at certain times. Hospital campus entrance reconstruction activities along the thoroughfare – installation of foundations and traffic/pedestrian pole signage, sidewalk ramps, traffic signs and pavement markings – will result in the Right lane closed during working hours (6 a.m. to 4 p.m., Monday through Friday.

But Corrigan assured the Grand Council that his team will do everything possible to mitigate the impact. He said as part of the building permit, the hospital had to repair some of the entrance ramps to make them more pedestrian-friendly and to comply with new codes. Work will begin at the end of May and he estimates it will take 18 weeks and will impact traffic for five of those weeks.

“Our hope is that it’s not as bad as we think it is and we’ll be watching it very closely,” Corrigan said. “[My] the team is aware of this and we will moderate [plans]. If the 6am check out doesn’t work out and we need to reschedule it to 5am, we will do that as well. »

Corrigan said the steel for the pavilion’s construction came from Canada and there were two truck deliveries every day for about three months.

“On the first day, both trucks arrived at the same time and the first truck entered the construction site while the driver of the second truck decided to wait on Community Drive and blocked one of the lanes around 7 a.m. morning,” Corrigan said. “It doesn’t take much to disrupt traffic on Community Drive, and I’ve had about 15 phone calls about it. So we quickly fixed the problem and had the truck moved. We told them that if they weren’t there at 6:30 in the morning, don’t bother showing up for the day.

Corrigan said his team will be proactive in informing the community of the specific impacts of the upcoming construction.

“Presumably people are smart enough to realize that we have a lot of activity on Community Drive,” he said. “We can do it overnight and we can do it early in the morning to really minimize that impact.”