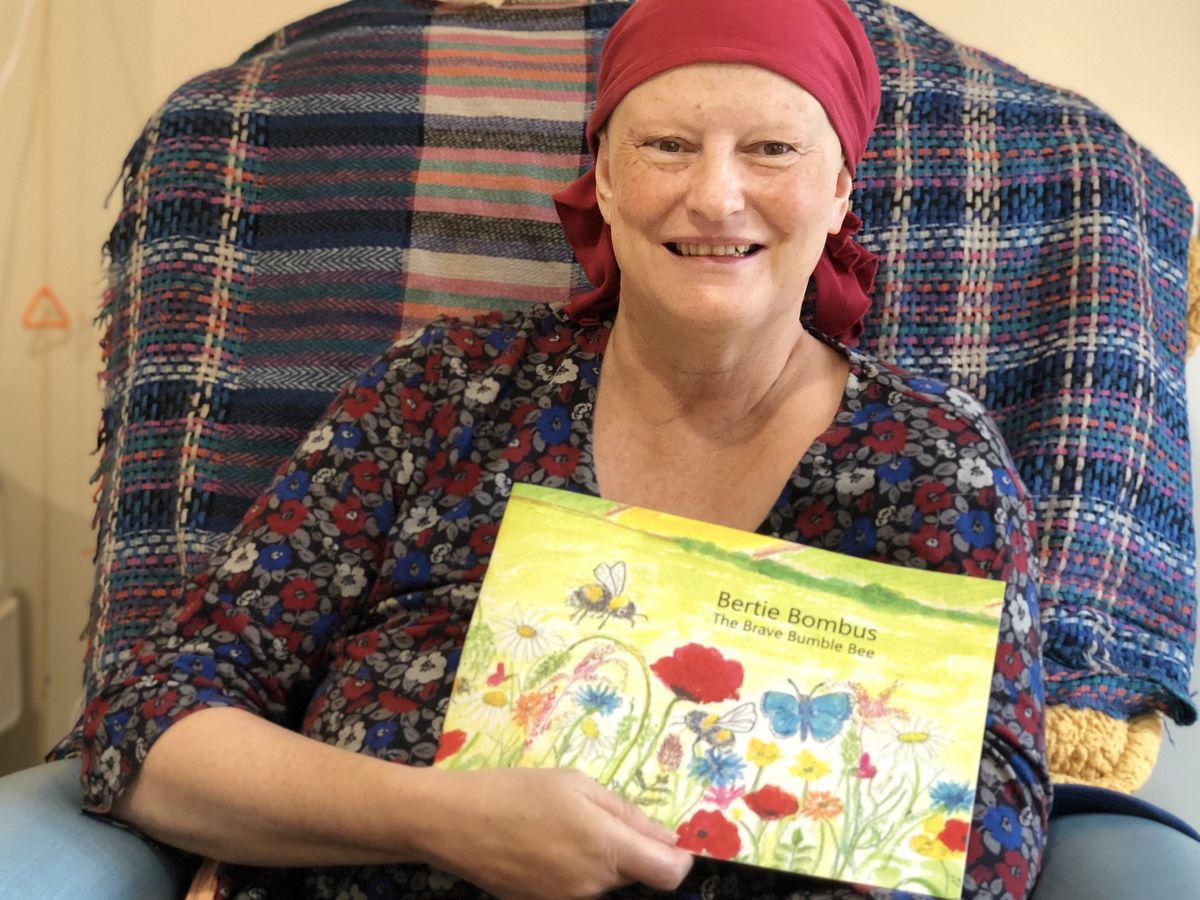 Bertie Bombus and Tom Tit are the hand-drawn creations of neuroscientist, and now author and illustrator, Janette Mills, who told their story in a new children’s book.

The 57-year-old patient from Shrewsbury was inspired to put pencil to paper for Bertie Bombus, The Brave Bumble Bee, when she first became a grandmother.

She said: ‘The idea for the book came to me in July 2021 when I realized this cancer had gotten to a stage where I was unlikely to see my first granddaughter, Matilda, or any other grow up. grandchild. I thought it would be nice to leave them something – a part of me. And I added another character named after Matilda – Tilly, the long-tailed tit – to the story.”

Having mainly drawn only as a hobby, Janette says the creation of the book “took her to another world, far, far away from the horrors of cancer”.

She said, “The story came to me very quickly; the inspiration was my granddaughter’s mother Grace’s love for bees.”

All proceeds from the sale of Bertie Bombus will be donated to Severn Hospice and other local cancer charities, both of which helped Janette following her diagnosis with an aggressive and unknown cancer.

Janette first received pain treatment at Severn Hospice in December 2021 and was cared for in the palliative care ward.

She said the charity is a “fabulous place – what humanity is”, adding that she wants the proceeds to go to local charities as she “has received fantastic care from the nurses from both charities”.

Five years ago, Janette and her husband, Simon, moved to Shrewsbury from Llanfyllin in Powys and downsized with a view to spending their final years traveling abroad regularly.

But in January 2018, Janette was diagnosed with cancer when her eldest son married and “the nightmare began” with experts baffled by the unspecific disease.

Instead of travelling, they have spent the past four years traveling back and forth to the Lingen Davies Center for treatment, and then more recently to London for several operations.

After undergoing lymph node removal, a mastectomy, as well as radiotherapy and chemotherapy at the Royal Shrewsbury Hospital, Janette and Simon took six months off to enjoy a road trip through Poland and several other countries. Europeans.

During the holidays, Janette knew the cancer had returned and didn’t say anything as she didn’t want to spoil the breakup.

When they returned, she started chemotherapy again and underwent another operation in April 2020 when the pandemic hit.

Janette said: “The fight against cancer has been relentless, apart from the time spent in Poland we have never stopped. The pandemic has come close to us. We were constantly on appointments and continued to receive treatments throughout.

“In 2018, I was told I had a year to live. And I’m still here almost four years later, so I’m very grateful for that time. I kept going; I kept going. I continued to sing in the Mere Singers choir, I continued to draw, paint and create.

“I started drawing 20 years ago when I was sick in California and a friend came over with pencils and paper. I love nature and the outdoors and walking, and that did I start drawing.

“Drawing really got me through cancer – you need things to almost take you to another world. I hadn’t written creatively since I was in school, but most of the story was written in an afternoon. The illustrations were drawn over time. I used pastels, watercolours, pen and ink.

The new author based the story in Fife, where she once lived.

And because of his scientific background, there’s a nod to science everywhere.

“Bombus is the generic name for the bumblebee, so that’s where Bertie Bombus comes from,” she explains. “And when Bertie meets a red mason bee in the garden, his name is Osmia which is the scientific name for red mason bees.”

In September 2021, just before a major operation to remove a tumor weighing one kilogram “the size of a watermelon”, Janette decided to finalize the story.

She said: “My husband and I were at an Airbnb in Camden Town in London while waiting, when I realized we might not have time, so we put our heads down, corrected and rewrote some of the book.”

The book was a labor of love, with family and friends rallying to support Janette in the production.

Janette said, “My friend knew we had to get the story done quickly, so her husband scanned the images, and their daughter did the layouts and got it ready for printing.”

Unbeknownst to her, the longtime friends of Janette’s walking group then got together to pay for the first copies to be printed.

When they arrived with them at her house, Janette said, “I burst into tears when I saw the book because it was fantastic to have it in my hands and see it come to fruition.”

Bertie Bombus, The Brave Bumble Bee will retail for £6 and is available at Refresh Cafe in Severn Hospice, Bicton.