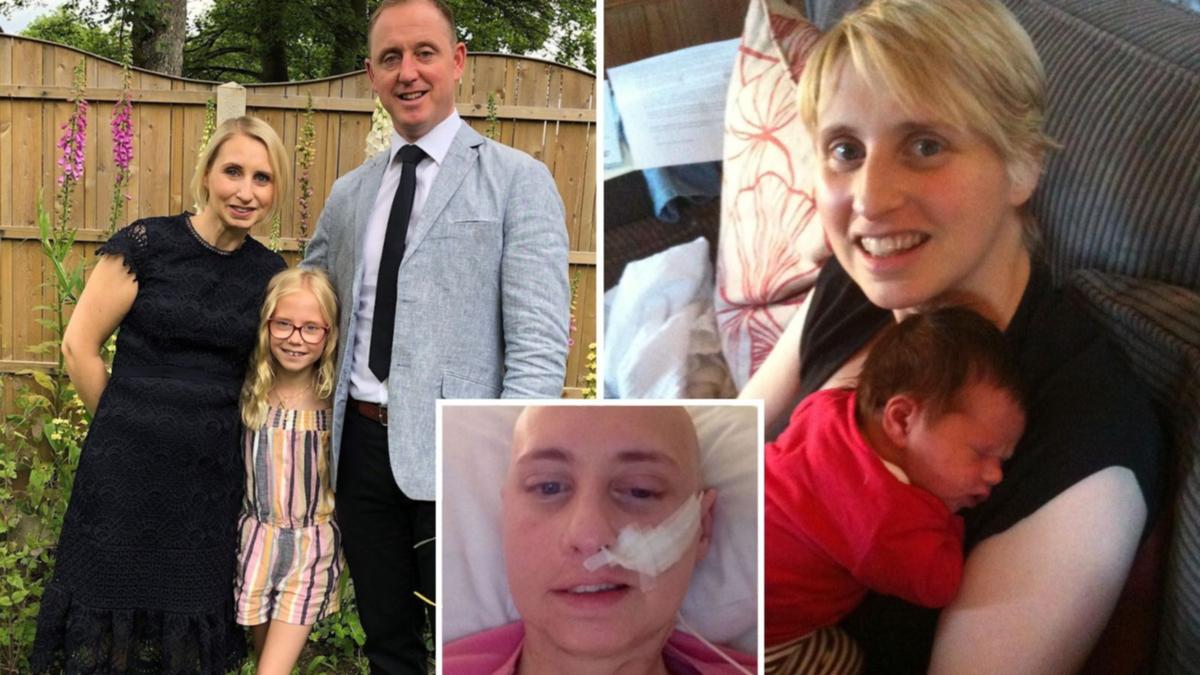 A mum has revealed doctors described her worrying symptoms as ‘baby fatigue’ – until it turned out to be a rare cancer.

Louise MacLeod, 44, was told by her GP that her constant fatigue was the result of recently welcoming her second child, daughter Nell, now 12, in 2010.

For more health and wellness news and videos, check out Health and Wellness >>

But nine months after the birth, the British mum discovered a lump on her neck and immediately feared it was cancerous.

She and her husband Andy, 44, also feared she never regained her energy after Nell’s birth.

She had not suffered from similar symptoms after the birth of their first child, son Oscar, now 15.

Louise noticed that she was constantly plagued with issues such as swollen glands, fungal infections and weight loss.

Her symptoms were dismissed as laryngitis and other simple common side effects resulting from childbirth, and she was told to rest.

But Louise was not convinced.

Over the next few months, more lumps appeared and her health continued to deteriorate.

GPs, however, still attribute her symptoms to the birth of a young baby and possible postnatal depression.

Louise requested a private referral with a specialist consultant, and she was eventually diagnosed with Hodgkin lymphoma in 2012.

“It was really overwhelming, especially since I had a young family to support,” Louise told NeedToKnow.online.

“But on top of being scared for my future, I was furious about my journey to diagnosis.

“The delay in being properly diagnosed could have easily cost me my life.”

Nevertheless, she was relieved to finally have a diagnosis.

“I thought I was going crazy – I’d had 11 months of unresponsive symptoms,” she said.

“I also had a 20-month-old toddler and a five-year-old who had just started school at the time and couldn’t stand the thought of not being there for them, as well as worries about what the treatment would involve.

“It was a horrible time.”

She began a grueling 10-month cycle of treatments that included four different chemotherapy regimens, some in clinical trials.

When first-line chemotherapy treatments failed, her care was transferred to another hospital.

The treatments had a huge physical and emotional impact, with Louise at one point dropping to just 35kg.

Doctors said his best chance of survival was to undergo a bone marrow transplant – his 47-year-old brother Richard was an ideal match.

The transplant was performed in September 2013 during a month-long stay in solitary confinement.

“I’m so lucky that my amazing brother was a willing partner,” Louise said, adding that the care and support from family, friends and the hospital team was incredible.

The operation was a success and was given the green light in December 2013 – just in time for a carefree family Christmas.

“Being declared cancer free was an absolute joy,” she said.

“Push to be heard”

In early 2014, Louise was able to return to her job as the head of a family business that supplies jewelry designers and bead shops.

She has been cancer-free for nine years and has dedicated herself to fundraising and raising awareness for UK cancer charities.

“I hope no one ever has to go through what I went through,” Louise said.

“But it’s important for people to know that if they feel something is wrong they should push to be heard by their GP and clinical teams.

“You know each other better and when something is wrong.”

Amelia waited over a year to see her doctor. At that time she was dying