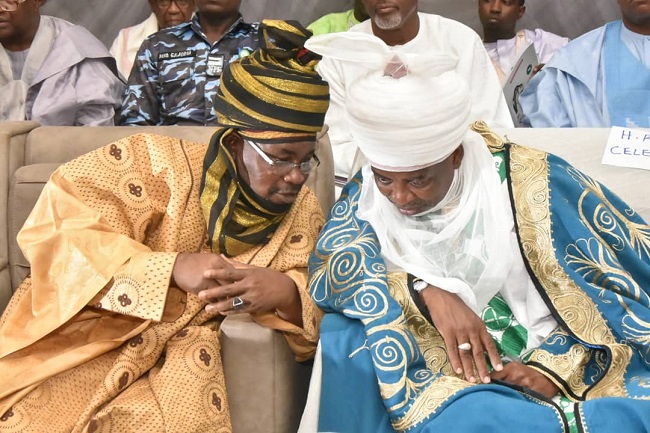 The Governor of Gombe State, Muhammadu Inuwa Yahaya again commended the people of the Emirate of Dukku for rallying their support for his administration.

The Governor gave the commendation during a civic reception organized by development associations in honor of the Emir of Dukku, Alhaji Haruna Abdulraheet 11 following his presentation of the national distinction of Commander of the Order of Niger (CON) by President Muhammadu Buhari recently describing the reception as a sign of love and respect for the monarch.

Represented by the Secretary of State Government (SSG), Prof. Ibrahim Abubakar Njodi, the Governor said the Emir’s recognition of the honor brought honor to the state given his contributions to national development during his tenure. active duty.

Inuwa Yahaya also used the occasion to appeal to the people of the state to remain vigilant regarding security given the influx of foreigners from neighboring states due to the insurgency in the sub-region.

He further called on politicians to avoid policies of bitterness, intimidation, violence and slander campaign as the nation heads towards the 2023 elections.

The Governor commended the foresight of the organizer of the meeting, saying that such events stimulate and promote unity and solidarity, urging other communities to emulate this.

Dukku Local Government Council Chairman Jamilu Ahmed Shabewa said the presentation of national honors to the Emir came at the right time in recognition of his tireless commitment to the good of humanity.

The guest speaker on the occasion, Alhaji Adamu Abubakar Alkali, represented by the State Commissioner for Finance, Mohammed Gambo Magaji, emphasized the benefits of social and corporate responsibility of organizations and individuals to meet the needs of the society.

Adamu Alkali therefore urged the people to remain receptive to government, private and individual investments for economic and physical development.

In his remarks, the Emir of Dukku, Alhaji Haruna Rashid, CON appreciated the government and people of the state for identifying with the emirate in all development concerns of the state.

The delighted Emir also called on the sons and daughters of the emirate, especially the development associations who initiated and successfully organized the reception in his honor to ensure the development of the region.

He then dedicated the CON award to the entire people of the emirate for their unwavering support for his leadership.

The historic event brought together commissioners for education, rural development, trade and commerce, among other personalities.