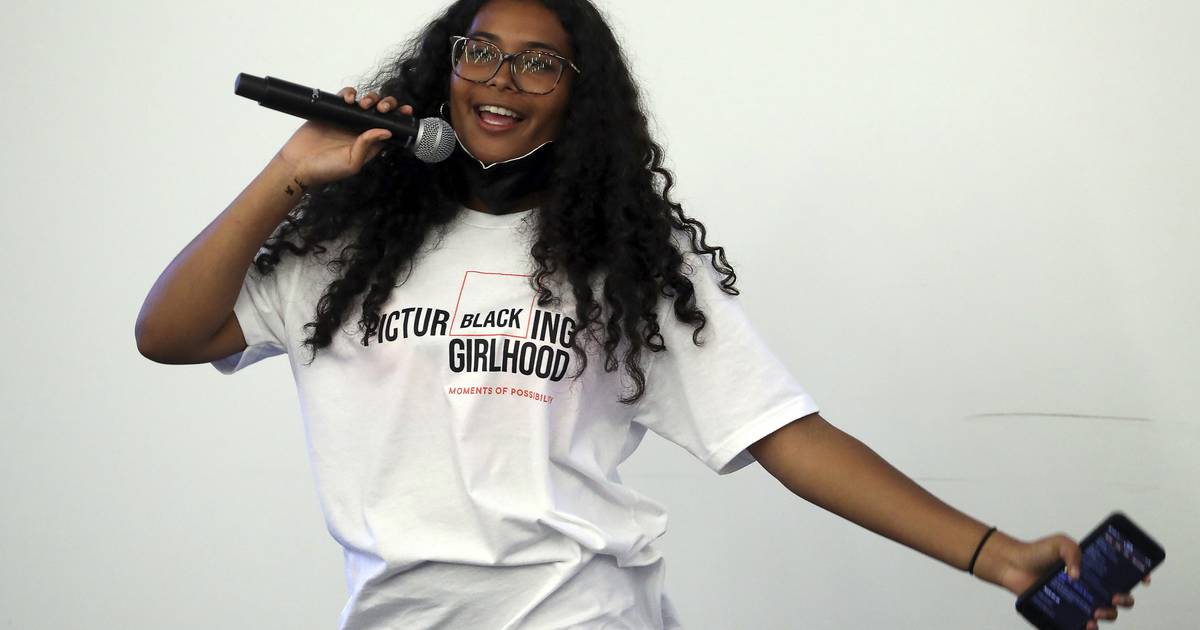 Savannah Flowers’ imagery of herself shows the myriad emotions and growth she experienced during her three years at A Long Walk Home’s Girl/Friends Leadership Institute. A black and white photo captures her working on the edges of her hair. Another colorful piece shows flowers in a green dress crouching in the middle of green grass, at one point facing the viewer and another facing the camera, showing the viewer the marks on her back, the results of treatment after her 2020 diagnosis with stage three Hodgkin’s lymphoma. Her last photo is another self-portrait, which has her middle finger front and center for the viewer.

Her work was featured along with dozens of other artworks in the School of the Art Institute of Chicago’s weekend exhibition ‘Exploring Black Girlhood: Through the Artist’s Eyes’.

Flowers, a student at Kenwood Academy, said last week that all of her photographs dialogue with each other. The first take of her freshman year on A Long Walk Home (ALWH) was a commentary on how black girls are fixed at a higher level, putting more emphasis on who they should be, rather than who they represent . At the time, she was in a predominantly white middle school, struggling with self-esteem, accommodating others about herself in her appearance. The green image was acknowledging the fact that she had cancer and was fighting for her life, acknowledging the feelings she had going through this experience. The last image was reminiscent of the first photo, but this one is in color, with Flowers looking at herself in the mirror not focused on her hair, but rather focused on who she is now, refusing to let others’ perception paint her image of self .

“This one basically dismisses what the others were saying…that’s why I’m raising my middle finger,” the 16-year-old said. “I really think I grew up. I wasn’t sure how this was going to be fully described as an entire project. It came on its own and I let it be what it was going to be.

Flowers has been part of ALWH’s Girl/Friends Leadership Institute, a year-long program that has been empowering black girls in Chicago since she was in middle school. She was exposed to a variety of artistic mediums and workshops during this time, pushing her and other black youth’s comfort zone to create and discuss issues that affect them. The concept is the brainchild of the Tillet sisters – Salamishah Tillet, 2022 Pulitzer Prize winner, feminist activist, scholar, and writer and Scheherazade Tillet, 2022 winner of the Field Foundation’s Leaders for a New Chicago Award.

A Long Walk Home is a Chicago-based national nonprofit organization that combines art, activism, and healing justice to train Black girls to be artists and activists against violence against women and girls. This summer, members were taken to Newark, New Jersey to experience three floors of artwork at the Newark Express of Rutgers University-Newark’s international exhibit “Picture Black Girlhood: Moments of Opportunity”. Scheherazade Tillet co-curated the exhibition which centers black girls as subjects, artists and agents of their own lives in more than 180 works by some 72 black women, girls and genderqueer artists, ages 8-94.

The SAIC exhibit was in response to the Newark space.

Flowers and other Chicagoland girls participate in the institute’s week-long arts and activism training at the School of the Art Institute of Chicago for which girls earn college credit and an after-school program in which girls are launching campaigns and leading public programs in their schools and communities, and across the country. Girl/Friends has graduated more than 17 cohorts (or classes) and 450 young leaders, according to ALWH’s website. Flowers recalls going to group therapy with other girls her age, going to events with loved ones of Breonna Taylor and Rekia Boyd, families who lost their daughters to violence policewoman.

“It’s really exciting to do because every year there’s a different theme,” Flowers said. “This year is about imagining black youth, the last time it was police brutality. There is a different conversation every year.

“Some of these photos are haunting,” said Scheherazade Tillet. “For someone who studies black youth every year … doing that kind of mentoring and working with young girls is such a gift. It’s about healing, it’s about honoring. We are so dependent on black girls and it also gives them the space to care for themselves and the resources to holistically do and lead. We went to Millennium Park and with everything that happened with young black and brown people, we gave them the chance to play. We double jumped Dutch, we danced, we picnicked and it was part of our program. Later they wrote these things like: “I am here” or “Black Girls Matter”. They talked about wanting to leave their mark and also reclaim that space. Even as we balance our mission to end violence against women and girls, play and joy are part of our sustainability in this movement, part of the lesson.

Danielle Nolen has been with ALWH since 2015. As Scheherazade Tillet’s summer assistant, the DePaul University senior hopes to graduate in 2024 with a degree in early childhood education. She said her dream was to open a social justice-based daycare center and incorporate the things she learned at institute into her educational environment.

“Young people are making a difference in the world, it’s not just the elderly,” the West Side resident said. “Future generations will be there to save the day.”

One such person is Catlyn Savado, the Percy L. Julian High School student who helped coordinate a CPS walkout to protest the lack of classroom safety measures amid the pandemic. This is the first year of the Girl/Friends programs for the second year. Her artwork shows her in an empty green lot where the homes of Robert Taylor used to be, the former home of the women in her life, including her grandmother. Savado said she wanted to capture “everything in a space of nothing or nothing perceived”.

“It has such a rich history and culture that people don’t really talk anymore,” she said. “It brought him home, which felt really near and dear to me.”

Since the walkout, Savado said she feels things have gotten worse when it comes to the visibility of the issues.

“I feel like people are pointing the finger at institutions a lot, but we’re not doing a lot of community building,” she said. “So when we have all this communal violence, we point to these institutions and ask for things and call out our wants and our needs, but it’s hard because they weren’t built to meet our needs. I’ve been frustrated and exhausted trying to figure out how can I do this on my own without calling an institution but also going to my community and saying ‘Hey these are the things that need to be done and we need to do it do for each other because we keep ourselves safe, and we keep ourselves nurtured, loved and nurtured and not these institutions.

Serenity White, a student at St. Ignatius and a resident of Englewood, is also a freshman at age 16. Having attended schools outside her neighborhood all her life, White said she always felt like an outsider. But with this program, she could write what she wanted to write, say the things she wanted to say without fear of being judged.

“It wasn’t until I got here that I realized my experiences weren’t as unique as I thought they were,” White said. “All black girls are going through the same things and we’ve been able to figure out where some of those issues are coming from and how we can start working to address them and be able to have conversations about those things and talk about the hard things. What I learned is not all you go through, you have to go through it alone.