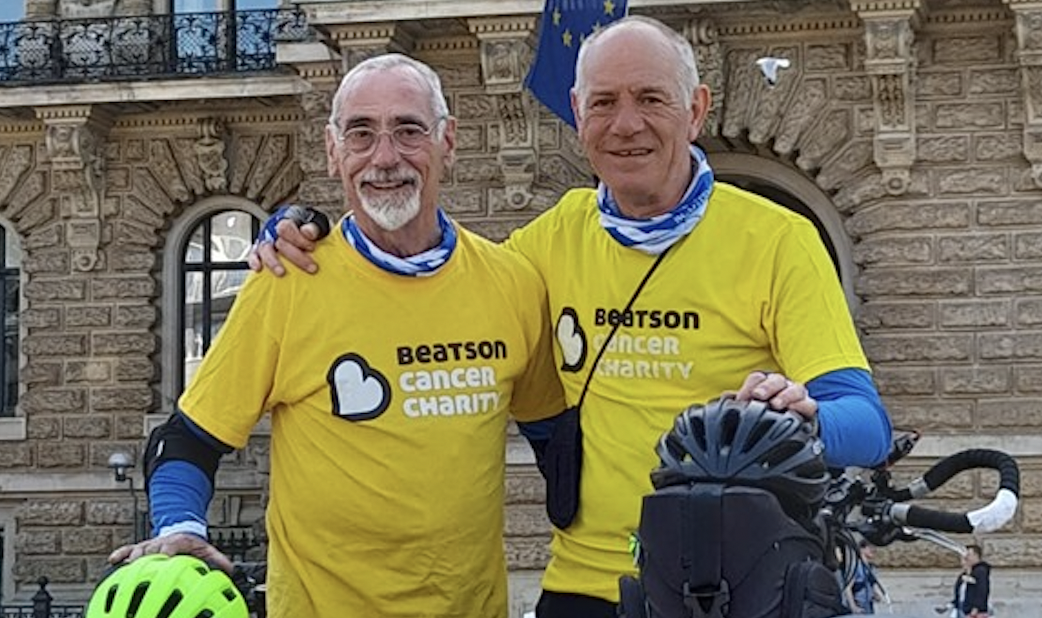 Erl Wilkie and Donald Christie will donate the money raised to the Beatson Cancer Charity.

Two friends from Glasgow have raised £2,427 for Beatson Cancer Charity, after cycling across Europe from Amsterdam to Hamburg.

Erl Wilkie, 78, and his friend Donald Christie had been planning the 576km trip for some years, but it was postponed due to the Covid-19 pandemic.

However, last November, Erl was diagnosed with esophageal cancer, which further delayed his trip.

The friends then decided to continue the journey in May this year and asked for donations to Beatson Cancer Charity for their efforts.

Erl says they supported Beatson Cancer Charity following the support he continued to receive after his diagnosis.

Erl said: “I did it because of the care I received and still receive because I am incurable. I still get this medicine every 3 weeks called Herceptin.

“The care I received in the Beatson was second to none. It was wonderful. And of course the fantastic research they do too.

“I felt very strongly that I had to pay something back for the wonderful treatment I received. That’s why we decided to do it for the Beatsons.

“You get a huge buzz about being able to do these things for charity – there’s no better charity than the Beatson for myself. It does your heart good to do good.

Donald and Erl have been running and cycling together for nearly forty years. Since their retirement, they have undertaken several major cycling trips such as Glasgow to San Ginesio in Italy and Berlin to Warsaw.

They also passed through various European countries such as France, Germany, Austria, Hungary and Slovakia.

The journey from Amsterdam to Hamburg was the only part of Europe they had yet to cover – in doing so they have now linked Glasgow to Warsaw and Gdańsk in Poland.

They left Glasgow on May 2 and traveled by train from Glasgow to Newcastle, and took a ferry from Newcastle to Amsterdam.

Calum McNair, Challenges and Community Engagement fundraiser at Beatson Cancer Charity, said: “We are so grateful to Erl and Donald for taking on this incredible challenge to benefit our charity.

“It’s always inspiring to see former patients and ex-patients raise funds as a result of the care and treatment they received at The Beatson – and this challenge is no different.

“Cycling over 500km across Europe at the age of 78 following a cancer diagnosis is nothing short of remarkable – and we can’t thank them both enough for their support.”