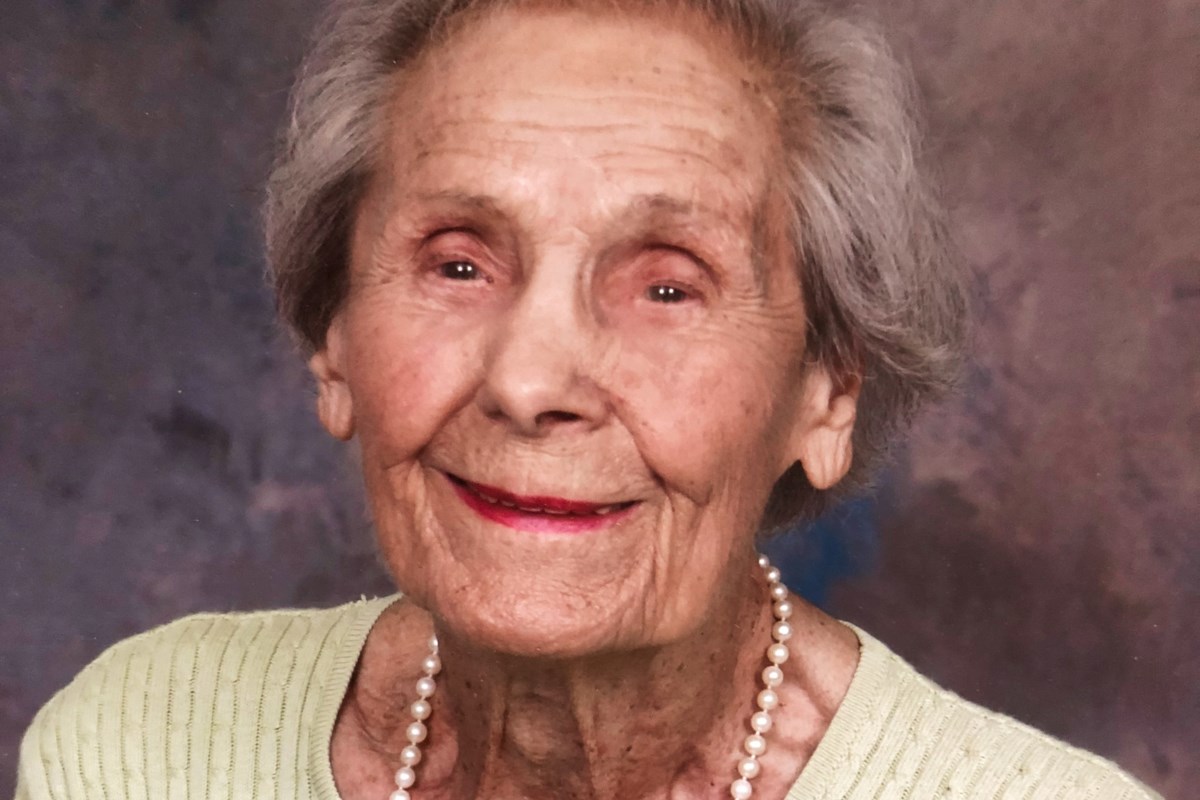 ELORA – Barbara ‘Bonnie’ Smiley will be remembered as someone who gave back to her beloved community.

Bonnie was an active volunteer with the Elora Singers and a member of St. John’s Anglican Church with her husband John. Both were strong supporters of the arts and their local volunteer efforts won them the Florence Nightingale Community Service Award in 1997.

On February 13, Bonnie died at the age of 96. Her daughters, Alison and Jayne Smiley, said their mother was a cheerful woman who loved to laugh, especially at The Three Stoogesand enjoyed a glass of champagne.

“(It was) very sad, she was a good friend to a lot of people, there were a lot of cards and phone calls,” Alison said, noting that many people also attended her funeral.

“He was a very cheerful, incredibly generous person. In fact, the Minister said of her in his eulogy that every time he sat with my mother, she served him,” Jayne said. “A lot of people confided in her, she was that kind of person.”

Bonnie was born in 1925 and grew up in the small village of Stanton-on-the-Wolds, Nottinghamshire, England. Growing up around adults, Alison mentions that Bonnie was close to her older brother, Peter, and her parents.

“She was in a family that knew how to have fun,” Alison said, mentioning that they often rode horses.

Bonnie stopped going to school at the age of 16 and started helping her father in his accounting firm by doing audits.

“She ended up being an outstanding clerk,” Alison said. “A few people said she was the best employee he ever had.”

When World War II broke out, Bonnie used her bookkeeping skills to help crack the code at the top-secret Bletchley Park decode center.

At 18, Bonnie was tasked with intercepting messages between ships, focusing on finding patterns in Japanese codes that were already broken. Doing this for three years during the war, Jayne said her mother called the task “a grunt job”.

After the war ended in 1946, Bonnie met her future husband, John, on V-Day.

“It was a dance…and my dad was asked to be part of a group of men from the Canadian pilots who were stationed nearby, and she saw him come in and she said, ‘We looked at each other and we just knew,” Alison said, adding that she remembers her mother saying she called the station the next day to ask for John before he and other Canadian pilots were sent home.

“(She) said, ‘Is John Smiley there?’ and the guy who answered the phone happened to be in the lobby and he yelled, “Is John Smiley there? and John was walking past the phone at the time, so she invited him home for the weekend and the rest is history,” Alison said. “They got engaged six weeks later.”

When John could not find work as a pilot in England, the couple decided to move to Canada. John went first, then Bonnie came next. The couple first landed in John’s hometown of Dryden where a snowstorm was hitting in mid-June. They then moved to London.

In London, Jayne said their mother immediately started working. She started working at the library at Western University and buying tickets at the community theater. As part of the job requirement with the theatre, Bonnie had to wear ball gowns while taking tickets, and so she started sewing her own.

“Eventually she became a very skilled seamstress. She made all of our clothes,” Jayne said. “She was making these dresses, and later I was playing dress up with these discarded dresses.”

Bonnie is described as a “true Brit” who was always homesick and has returned to visit England on several occasions. As a couple, Bonnie and John loved to travel and visited countries such as Mexico, Portugal, France, Belgium and the United States.

In 1958, Bonnie began working with the Ontario Provincial Library Service, which required more travel. As editor of the Revise in publication, Bonnie traveled to various locations across Canada to interview authors of children’s books, where she conducted interviews in French.

“She loved working because it gave her the opportunity to be alone, and then the trips she really enjoyed,” Jayne said.

After the two girls left home, Bonnie and John decided to move to Wellington County and settled in Hillsburgh, joining St. John’s Anglican Church in Elora.

“They talked about it when I was about 13 or 14 about moving there and changing high schools, but they decided not to,” Jayne said.

“They loved the countryside, they were great birdwatchers, they loved watching birds and animals, and they were kind of early life conservationists, they were always aware of what they were bringing home and they had two huge gardens.”

Over the past 40 years, the couple have embarked on a variety of exciting projects, volunteered in the community, enjoyed the arts, and hosted many parties, including an annual Christmas party.

In 2017, Bonnie moved into the Heritage River retirement community. Even into her 90s, Bonnie continued to volunteer in Elora helping children read at a nearby elementary school once a week. Both Jayne and Alison said everyone loves Bonnie and she has the ability to connect with people of all ages.