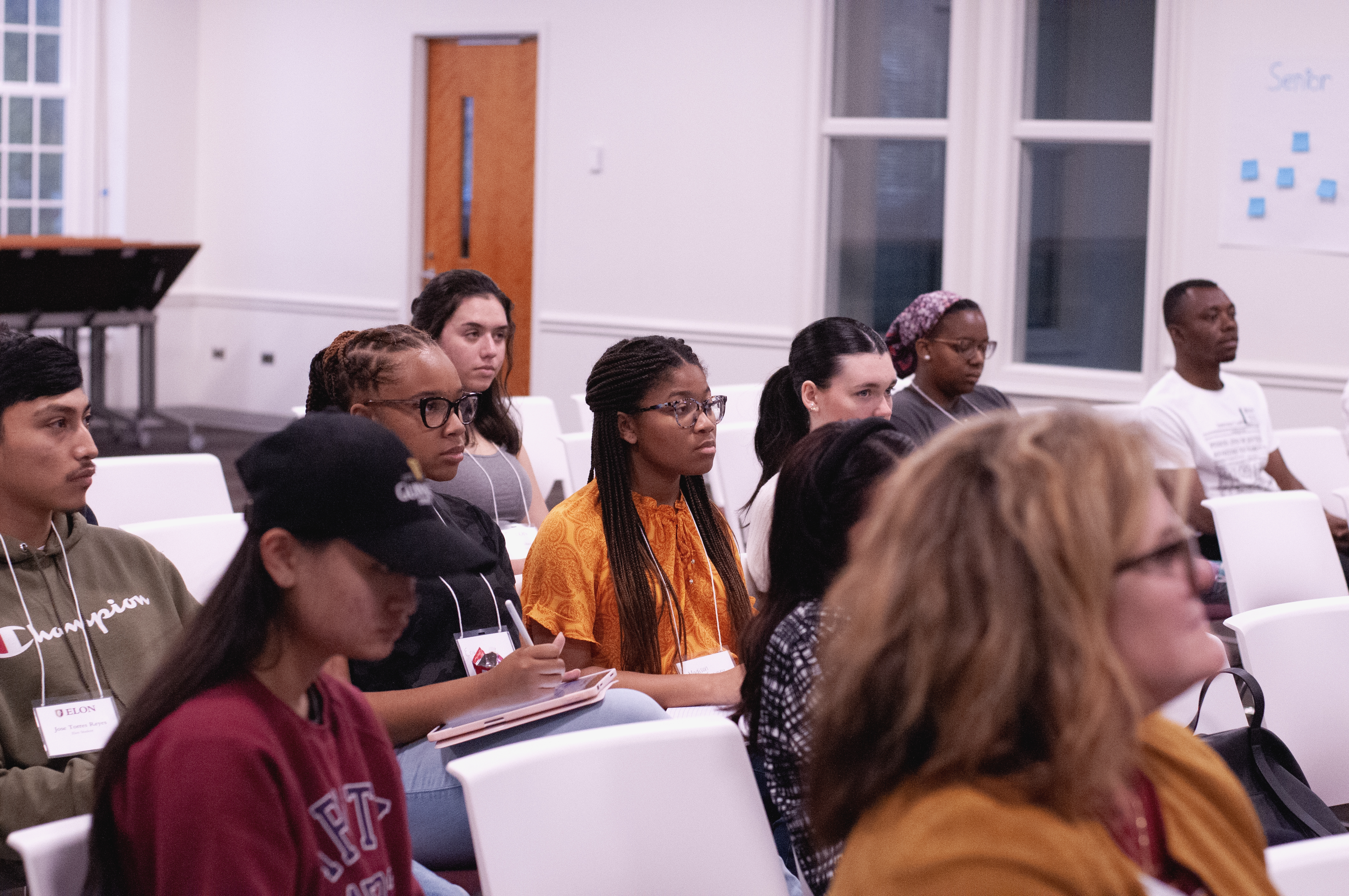 “I write because it’s therapy. My pen is always there for me. I fight because my team is strong. They helped me get my weight going,” Charity Blackwell quoted during her poem “Poetry and Football” during the keynote address at the Intersect Diversity and Leadership conference held Nov. 11-12.

Intersect is an annual two-day conference hosted by the Center for Leadership and the Center for Race, Ethnicity and Diversity Education (CREDE) that examines diversity, leadership, and the intersections between disciplines. This year’s theme, “Period. End of sentence. Rewrite the story. focused on reclaiming narrative from the stories and stereotypes that are often told about us but are not ours.

Nadine Jose ’23, student director of education for the Intersect 2022 conference, shared that the conference committee felt Blackwell was an obvious choice for a keynote speaker because of the way she grabbed her own story and experience, stating, “We thought she was just a perfect fit to go with our theme.

Blackwell is a spoken word artist, host, emcee and poetry scholar. She received her BA and MA in Communications from Trinity University. Currently, she is the Director of Creative Arts and Director of Poetic Events (DOPE) at Busboys and Poets.

Blackwell’s keynote focused on the journey of how understanding your own identity can help deliver the most effective impact in diversity, equity and inclusion (DEI) work. Blackwell provided a different style of opening speech by encouraging audience engagement and incorporating poetry throughout his speech.

She introduced herself by sharing the many aspects that are part of her identity. Two essential pieces are poetry and football. His first poem during the speech was aptly called “Poetry and Football”. Closing the poem, she stated that passions are part of their identity. She then revealed that grief has been one of her identities since losing her parents, saying that grief never leaves.

“Sometimes it’s a bit around here, but it comes back. And it’s going to go a bit here and then it comes back to a point where I finally had to one day acknowledge that it’s part of me. It’s something I’m going to live with for the rest of my life,” Blackwell said.

However, she expressed that all of her identities, including grief, have shaped who she is today. She has stated that she uses poetry as an outlet to bring together the many aspects of her identity.

In transition, Blackwell said she believes many conversations about DEI are happening but something is missing. She told the audience that as leaders, they must have the ability to create common ground to ensure diversity and equity. However, despite her training, she learned that DEI work only matters if you first work on yourself internally. Introducing the term ‘use of self’, she explained that an individual’s lived experiences are how they approach DEI work.

“When it comes to DEI, you are the most powerful tool. No one has walked for you. No one has experienced what you have from your perspective. Your personal lived experiences are what shape you and determine how you’ll approach work, how you’ll present yourself in those spaces,” Blackwell said.

She also stressed that one must be as centered as possible to use oneself as a tool by using one’s lived experiences to make an impact, ultimately teaching others and creating space to learn. Therefore, understanding yourself and looking within is the first step in the journey.

“You first have to be able to understand who you are, all the different parts of your identity, and accept that and be okay with that so that when you show up in spaces you can check yourself at the door to have the most impactful change possible,” Blackwell said.

She then provided the second stage of the journey, which is to understand not only your marginalized identities, but also your privileges. She shared how sometimes her oppressed identities overshadow her privileges.

“I forgot that I still had a lot of privileges that I had to consider. And because I’m so into my own oppressions [and] identities, I leave out the people who are also in this battle with us. At this intersection, when we talk about intersectionality, I have to accept and understand how I present myself in the spaces,” Blackwell said.

She went on to say that you also have to understand their privileges when showing up for others.

“Sometimes understanding not only your marginalized part of who you are, but also your privileges. I preach this to white people, but even for us as black people, we have to understand all of our privilege when we show up for other people because our stories aren’t modeled,” Blackwell said. “I think we find that a lot of people want to lock black people into one group, with one way of thinking, and there are so many different thoughts,” Blackwell said.

At the end of the speech, she recited several poems centered on aspects of her identity. The first poem was titled “Swiss African American”. She told the story of a trip to Switzerland with one of the children in her organization. They were selected to be in a film with other children from other countries. She also shared that it was during the period of the Trayvon Martin trial. During the poem, she shares parts of her conversations with other Black Riding Hoods from different parts of the world. She said she learned “how American and black American she was.”

She followed with a poem centered on her history and experiences as a black woman. Dedicated to her late mother, she named the poem “The Gift of Giving”, stating, “She said that giving is something that cannot be measured. In fact, it is a treasure. Something like a gift because the gift of giving is an ancient tradition in line with our ancestors.

The next poem was titled “Cookie,” relating to her childhood as a Girl Scout and tapping into her grief. She said it took her a long time to come up with an ending, but she finally figured out that the poem wasn’t meant to have an ending. “It’s a poem about mourning. I never understood this ending. And I was like because it’s not supposed to have a happy ending,” Blackwell said.

The final poem, titled “Shaq”, was dedicated to her future father. She explained that she and her father connected and communicated through sports. The poem says that she remembers, during a basketball game, the free throw technique that her father taught her. His father was supportive regardless of the outcome of the game. She also made a correlation between life and free throws saying, “I realize now that I have had and will continue to shoot free throws all my life. This world is nothing but a basketball court, and most of the time our biggest enemy is ourselves,” Blackwell said.

Blackwell closed the address, encouraging the public to continue to come out and check themselves at the door when showing up in the spaces. Blackwell’s dynamic address had a powerful impact on audiences, allowing them an eye-opening experience that prompted self-reflection and discovery.

“I think it’s very impactful in the sense that it kind of makes you examine yourself in a way that you normally wouldn’t,” Connor Vaughn ’26 said. “We tend to focus on the outside and don’t necessarily take the time to focus on who you are, who you are, and what affected you,” Vaughn said.

Madison Williams ’25 and Morgan Williams ’25 felt a similar impact. “The keynote speaker really got me thinking about how my identities are expressed and how I present myself with them in the world because that’s something I haven’t thought about often,” said Madison.

Morgan said his biggest takeaway was “simply knowing that my own position, as I’ve learned, impacts how I interact with others.”

Contia ‘Prince ’18 G’19, a UNC-Chapel Hill doctoral student and lecturer, shared that she was touched by Blackwell discussing how she came through grief while engaging in self-reflection and l self-reflexivity.

“Listening to him recognize that there are different parts of your identity and not all of them are pleasant, but you still have to bring even the unpleasant parts of you when you come to work to recognize how it affects the way you should get up in a different space,” Prince said.

Other highlights of the Intersect conference include educational sessions and panel discussions such as “Race. Religion. and Ownership of Education,” “Inclusive (Student) Leadership,” “Leading with Authenticity and Curiosity,” and “Building Equitable Communities Through Service.”