Each wreath brings a story of service and sacrifice 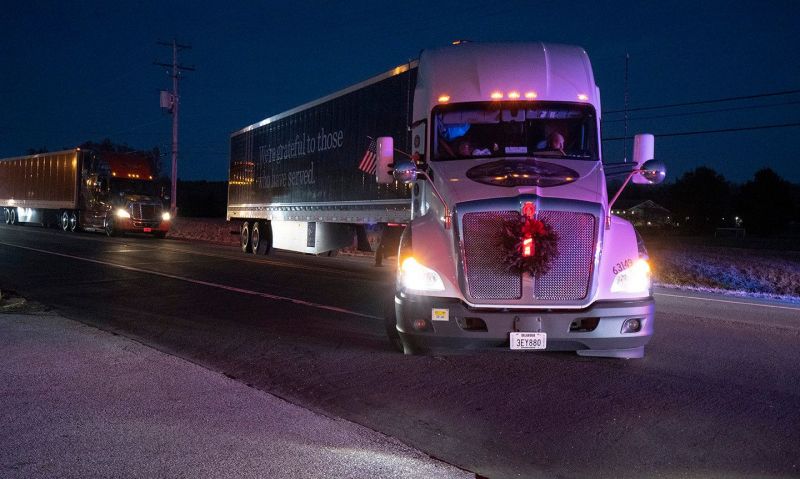 The Wreaths Across America trailer returned this year to American Legion Post 278 in Stevensville, Maryland.

It was a triumphant return after COVID-19 restrictions necessitated a scaled-down event in 2020. Only one truck made the pilgrimage last year to deliver wreaths to Arlington National Cemetery for the annual Wreaths Across America event.

This year, with the help of hundreds of volunteers, law enforcement officers and supporters along the route, the Wreaths Across America convoy returned in full. A dozen semi-trucks adorned with wreaths and artwork traveled nearly 1,000 miles from Columbia Falls, Maine, to Arlington National Cemetery, where they arrived on December 18, Wreath Day at across America.

Escorted by law enforcement vehicles, they made stops at schools, monuments and veterans’ organizations along the way. Post 278 greeted the convoy on its final stop before touring the Pentagon 9/11 Memorial and National Mall landmarks in Washington, DC, to lay wreaths before heading to Arlington National Cemetery.

Nikki Randolph, vice-commander of the Maryland Department’s East Coast region, said Station 278 welcomed the convoy with open arms. Each year the station hosts a dinner for all the volunteers and sends them out with a gathering of several hundred school children waving flags in the field across the street.

“This is the 12th year that Wreaths Across America has visited our post en route to Arlington,” she said. “We are very happy to see our family come back in force. “

Renee Worcester, Director of Outreach and Partnerships for Wreaths Across America, is also part of the family that founded the organization.

“This mission began in Columbia Falls, Maine, and with the overwhelming support of so many volunteers across the country, we are laying wreaths in over 3,100 participating cemeteries,” she said.

Volunteers are depositing more than 2.4 million crowns this year. A third of the volunteers, Worcester said, are children.

“It really fits our mission to remember the dead, honor those who serve and teach our children the value of freedom,” she said. “We have Gold Star Families, Blue Star Families, Veterans of all eras and volunteers who took the time to be part of this journey bringing the Wreaths Across America Mission to different communities along the East Coast.”

Volunteers lay more than 257,000 wreaths at Arlington National Cemetery, saying aloud the name engraved on each gravestone as they do so.

“The crown symbolizes so many things to so many different people,” Worcester added. “We have a meaning behind the crown, but it’s also a catalyst for bringing in volunteers and engaging with each other and communities and telling stories of service and sacrifice. “

For Portland Maine Police Department member Kevin Haley, this trip is personal. His brother, William Haley, is buried in Arlington National Cemetery. Haley now sits on the organization’s board of directors, but accompanies the convoy every year.

“It’s pretty powerful to see that all of the patriotism here in the United States is alive and well,” Haley said.

When Haley looks at every wreath placed on a gravestone, he sees more than fresh balm.

“It’s alive,” he said. “It brings these veterans back to life. And especially when you add that to saying their names out loud, they will never be forgotten. ”