DramaWatch: The Truth of Bella and Other Great Stage Tales 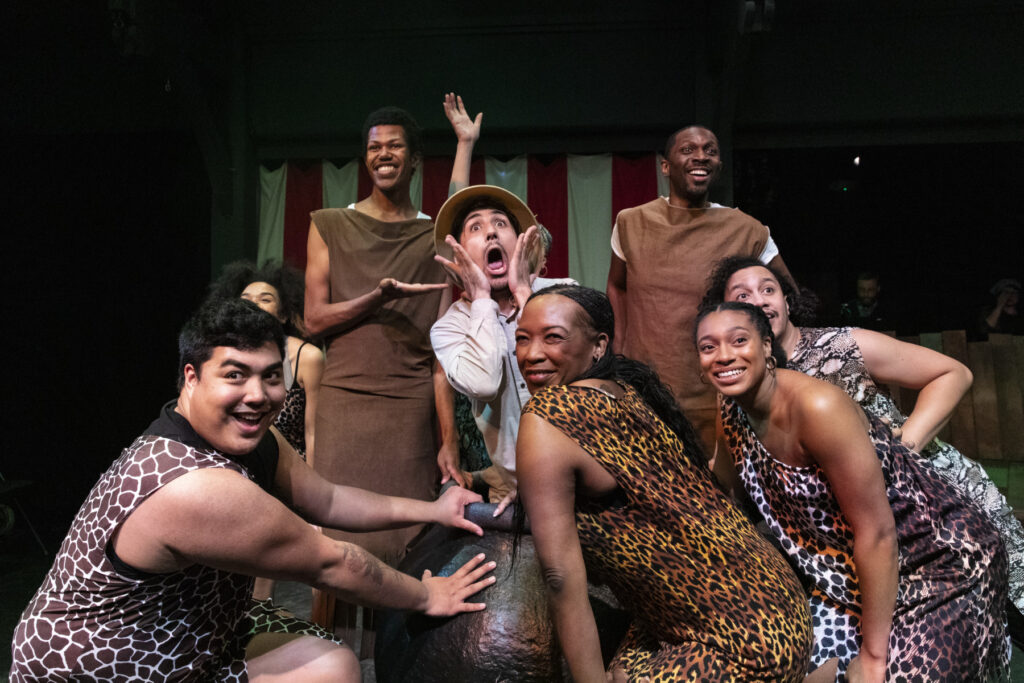 YOU PROBABLY DIDN’T LEARN THIS IN HISTORY, BUT “OUR COUNTRY’S FOUNDER” George Washington shares at least one essential quality with Sir Mix-a-Lot, the Seattle rapper famed for the 1992 hit “Baby Got Back”. ”

Both men, we know from legend or self-proclaimed, can’t lie.

But who would have guessed that the appreciation of big asses could, like Washington, become a touchstone of American cultural myth?

Apparently Kirsten Childs did. children’s musical Bella: An American Tale centers on a character that the Portland Playhouse website snidely describes as a “woman of mythical proportions and heroic appeal”. Bella, who calls herself a “Big Booty Tupelo Gal,” leaves Mississippi to become “a Wild West figure with a Wild West figure.”

Double bubbles aside, the show is Childs’ attempt (at least according to a second-hand quote five years ago in The New York Times) to “create a new myth that celebrates the power and beauty of women. black” – attacking the dominant ideals with, one might say, a rearguard maneuver.

Either way, Bella thwarts the brutal advances of a hometown thug and hits the road – or rather the railroad – to escape the turmoil and reunite with her man, serving out West as a Buffalo Soldier. . Set at the start of the Jim Crow era, the show references some dark parts of history, albeit in a fairly lighthearted context. (I don’t know if we’re supposed to find Playhouse’s “content notice” funny, but somehow a list that goes from “use of the N-word”, “stereotypes of ‘Africans as cannibals’ and ‘lynching mentions’ to ‘there’s a striptease by a Chinese-American cowboy’ sounded hilarious to me.)

Portland Playhouse had originally scheduled the show to open on May 7. However, some non-health related production issues, followed by a case of Covid within the cast, led to delays in technical rehearsals and the cancellation of early preview performances.

But what are you going to do?

The opening night has been postponed to Friday, May 13. Danielle Barker stars in a production directed by Damaris Webb, who has just completed a fantastic job at Clackamas Rep with Queens Girl in Africa. The star of that other show, the luminous Lauren Steele, appears here too; as does her mother, famed Portland rhythm & blues singer LaRhonda Steele, playing a character called “Spirit of the Booty”.

The Flattened Scene: Gilbert & Sullivan/Baby Got Back

“If there is a universal truth about beauty – a concise and elegant concept that encompasses all varieties of charm and grace that exist – we do not yet understand nature enough to articulate it. What we call beauty does not is not simply one thing or another, neither entirely intentional nor entirely random, neither simply a property nor a feeling. Beauty is a dialogue between the perceiver and the perceived. Beauty is the world’s response to the audacity of a flower.

— Ferris Jabr, in The New York Times Magazine, writing about theories on the role of aesthetics in evolution.

A WEEK AGO at Profile Theatre’s opening show Appropriate (fantastic show, by the way), I met esteemed actor and ArtsWatch contributor Bobby Bermea. “You have a show coming up soon, don’t you?” I asked.

Of course, the fashionable way to phrase this would be, “We’re going to perform an imagined piece of theater, created collaboratively by all the artists. But by either description, We live here looks promising. The description on the Hand2Mouth site, I admit, I can’t seem to make heads or tails (“We live here takes an audience from the same community, location, city, or group on a journey through an interactive series of touchpoints over a lifetime; slowly becoming more influenced and responsive to participant interactions and responses…”)

But the involvement of talent such as Bermea, multi-talented scene veteran Susannah Mars, Briana Ratterman (so darkly compelling in Hand2Mouth’s recent hit The Testament of Francois Villon) and others are enough to pique my interest.

ONE OF THE IDEAS behind the formation of The Theater Company of Portland was that it would focus on staging plays in a variety of public spaces around the city. by Jen Silverman Moors at Tabor Space was supposed to kick off in March 2020, when some viral disruption happened. After two years of commissioning scripts and producing podcasts and videos, TTC is finally delivering its first in-person production, The thin placean exploration of the supernatural by Lucas Hnath, known for pieces such as The Christians and A dollhouse, part 2. This production will take place at KEX, and while my first thought was that a radio station is an interesting setting for a play, it turns out that this KEX is a hip hotel near the east side of the Burnside Bridge. The cast is led by the formidable Diane Kondrat and Theater Company Artistic Director Jen Rowe.

WAY BACK WHEN, a Portland woman named Nancy Boggs had an idea and decided to see if it would float. It was around 1880, and although Portland was young and reckless, Boggs still wanted to work with as little oversight from the city as possible. So she bought a large flat-bottomed boat, built a saloon and brothel on deck, and began hosting party cruises along the Willamette River. Business sank.

This colorful piece of civic history forms the basis of Sex on the rivera new musical from Don Horn and his company Triangle Productions.

MILAGRO PRESENTS THE WORLD PREMIERE of City without an altar, Dominican-American playwright Jasminne Mendez’s look at the Parsley Massacre of 1937, a horrific massacre of Haitians in the neighboring Dominican Republic by the Dominican military. If Berkeley Rep staffer Mon ‘Emmett directs a play that, according to Milagro’s website, “takes the form of a poetic ritual, transforming the stage itself into an altar where the spirits of…victims can have a voice again.”

EVERYONE MUST make a living. So David Lindsay-Abaire, author of the Pulitzer-winning dramatic masterpiece rabbit hole (as well as some wonderfully antique comedies), takes on a Dreamworks gig, creating the book and lyrics of Shrek the Musical, based on the popular animated film. Then again, it does it well enough to earn a Tony nomination.

Thus, the alliance of family commercialism and high-level craftsmanship is also in the DNA of the compact version, Shrek the Musical JR. Musical theater students from the Lakewood Theater Company put the beloved green ogre on the board for three shows this weekend.

FOR ALL ITS HIGHFALUTIN associations and lore-bound expectations, William Shakespeare’s work offers plenty of room for playful experimentation – especially if you’re not actually interpreting William Shakespeare’s work. Improv comedy group Love, Shakespeare takes themes, tropes, tricks from the bard world (loosely defined), throws them into the room and spins those associations and expectations on their pointed heads. It’s great fun from and with quick-witted performers.

PERHAPS AT THIS POINT, any discussion of climate change inevitably includes (consciously or unconsciously) elements of political analysis and cultural critique. Who rolls straight into the wheelhouse of climate activist and theater maker Josh Fox, who brings his show The truth has changed at the Hollywood Theater under the Boom Arts umbrella.

CLIMATE CHANGE is also the topic in Lucy Kirkwood children, albeit only by inference. On its surface, the play, which The Guardian’s Michael Billington ranked third on a list of the best theater performances of the century so far, depicts a tense relationship triangle between retired nuclear engineers reunited following a disaster a bit like the tsunami and the following ones. 2011 Fukushima reactor crisis. Interpersonal dynamics gradually blossom with thorny social and moral questions about generational responsibility, individual aspirations versus communal ideals, and how we measure the value of life. It is a subtle and stimulating work, imbued with good doses of laughter.

The Artists Rep production, helmed by Luann Schooler and featuring three wonderfully matched stage titans – Linda Alper, Elizabeth Elias Huffman and Michael Mendelson – is the kind of finely crafted work of art that reminds us how and why the theater is essential. Please go see it while you can.

Also on to the story: twelfth night by Young Professionals of Oregon Children’s Theater and a Clever Enough Hamlet.

I find this review of an Off Broadway revival of Sondheim In the woods, by Alexis Soloski in the New York Times, particularly interesting for two reasons. On the one hand, this musical is, in my opinion, such a compelling and moving show, and I appreciate Soloski’s clarity and conciseness in explaining what makes it work. Additionally, I love how the review weaves together some personal memories and responses, threading them into a discussion of the balance between the intellectual and emotional aspects of Sondheim’s (and librettist James Lapine’s) work.

That’s all I have for now. I will try to do better next time.