Defiance resident Nathan Laupp has always loved hockey. He is also a U.S. Navy veteran who is committed to helping other veterans struggling with problems / disabilities. Last year he found a way to combine both passions under one program – Warrior Hockey.

Laupp signed up for the US Marines right after high school. September 11, 2001 was Nathan’s first day at boot camp. A week later, he learned that he would be deployed to Iraq, where he was serving in the Third Light Armored Reconnaissance Battalion. He still vividly remembers his first real combat mission and the adrenaline and emotions that came during and after that experience. His unit suffered two losses during the tour – both self-inflicted, an accident and a suicide.

Nathan served a second assignment in 2004-05. It was more difficult for a number of reasons. Saddam Hussein had been captured and rival groups were fighting for power. It was hard to tell who the enemy was. There was an escalating, pervasive threat from non-conventional attacks by militant groups that no one ever really relaxed.

Nathan lost a close friend during the tour, his father had recently died of cancer, and his mother was diagnosed with cancer during his assignment. She died shortly after he returned.

At that point Laupp said, “I was done.”

Fortunately, Laupp’s future wife, Allison, encouraged him to go to college after his release. “Never in a million years would I have thought that I would ever go to college. I was an unconventional high school student. Nobody in my family had ever gone to college. But if you have a really good partner, this will help you further. I benefited from that. ”

About four years ago, Laupp was given the opportunity to help with the Focus Marines Foundation, which helps veterans struggling with emotional, physical, or financial problems. He currently serves on the Focus Marines board of directors, providing financial training and advice to veterans entering the Focus Marines program. Laupp also runs another charitable appeal, The Dinner, a group of business owners / executives who support charities devoted to helping poor and / or terminally ill children. When he met with Focus Marines CEO Walt Suhre, Laupp noticed one thing. Suhre said: “You should do three things: learn, earn and return.” Laupp said: “I really tried to implement that in my life.”

After the St. Louis Blues won the Stanley Cup in 2019, Laupp saw an old friend who was an NHL / AHL goalie on a Facebook photo with veterans playing in a hockey league in Philadelphia. It was there that he heard of “Warriors Hockey” for the first time.

Warriors Hockey is dedicated to the injured and disabled U.S. military veterans who have served our country and are involved in the sport of ice hockey. While some of the participants were playing hockey before their injury, many are trying for therapeutic reasons for the first time. Veterans must have a VA disability rating of at least 10% and have been honorably discharged to participate.

Laupp thought, “Wow, hockey plus helping veterans! Count me in!”

His friend said, “You should see if the blues have this.” Well, the blues didn’t have such a program. So Laupp turned to USA Hockey, the warrior hockey nationwide overseas, and they jumped at it. They wanted to bring the program to St. Louis. “When can we talk?” They asked.

So Laupp set about getting things started. He started a 501 (c) 3 corporation, but he was desperate for an endorsement of the St. Louis Blues. Several professional hockey teams across the country support Warrior Hockey, and with the Blues’s recent Stanley Cup, that affiliation would be a huge advantage.

Laupp was able to arrange a meeting with the Blues with the help of a team-mate in an adult hockey league in Brentwood. He met with Randy Girsch, St. Louis VP of Community Relations. He explained the program and how it would have a much bigger impact if he could put a Blue Note on the team jerseys, and the blues got on board. The Blues designed the logo and gave them a grant. They also helped connect with blues alumni and, with the help of his Philadelphia friend, won Rob “Rammer” Ramage, former blues first-round draft pick, as coach.

Laupp said: “The blues alumni were great. We received both cash and equipment donations from the St. Louis Blues and alumni, which is huge! ”The St. Louis Warriors teams were on the ice for the first time in June 2020. Then it just exploded. Laupp said, “We are now the fastest growing Warrior Hockey League in the country. At first we hoped to get enough players for two teams. We have four teams and a waiting list for other interested parties. ”

“We don’t care what skills you have. It’s about getting on the ice together. We have four teams, each on different levels: Alpha, Bravo, Charlie and Delta. The Delta Force are the beginners and probably did most of the work. We have Ice Age three times a week, during which the teams train against each other. ”Laupp said:“ This is the best thing I’ve seen since my discharge from the military. We all come together for a common goal. We have uniforms and “missions” (win games / tournaments). We sent three teams to a tournament in Dallas a few months ago and one of our teams actually won a tournament in April. We’re sending three teams to Minnesota in June and going to the Warrior Classics sponsored by the Philadelphia Flyers in November. ”

The St. Louis Warriors also play other adult hockey teams known as “work-through games” to improve their skills. Warriors training at Centene Community Ice Center in Maryville (the blues training track). Training, game and tournament schedules are published on the team website and are available to viewers and live streams.

May 2021, the Warriors Hockey program was highlighted as part of the Blues Military Appreciation Night. A video of the program was played and season ticket holders donated over 300 tickets for Warrior members and their families to attend. On May 9th, Frank Cusumano, KSDK St. Louis, did a feature about the Blues Warriors. A link to the video can be found on the St. Louis Blues Warriors Hockey Facebook page. https://www.facebook.com/100117874925543/videos/637790347189790.

Participation in the program has a great impact on mental and physical health. Laupp said: “We still have our struggles. We have a lot of PTSD and TBI on the team. We had to refer some players to rehab. But we are all there for one another. We’re also working on how we can get the people on the waiting list more involved. We hope to do more off-ice stuff now that the COVID restrictions are relaxed. We also want to offer veterans more than just hockey. With the support of the Philadelphia Flyers, we were able to implement a Tel-a-Doc program for members. We hope to be able to do more of these things. ”

Laupp sees the greatest challenge in the future in raising money: “Every player pays 225 US dollars a year because we believe that the players should have some skin in the game.” But that’s only 15% of the total budget ($ 150,000), of which $ 45 to $ 50,000 is spent on hold. The league is fortunate that much of its tournament travel expenses are paid for through donations and discounts, but recovery is an ever-present challenge. “We will accelerate our fundraising efforts in the future – especially for businesses”. Sponsorship. We want to put a company name on our jersey! ”Said Lauppe.

The league also sells merchandise on their website, hosts an annual 5000 run to raise money, and receives a percentage of the revenue from some of the Blues charities like the Mystery Autographed Puck program and special kit auctions.

Another challenge was to cope with the different needs of the players. “Our players are there for different reasons. Some just come for fun and camaraderie. Others are more competitive. Trying to put together a program that meets these diverse goals is challenging. ”He added,“ Our vision / mission is to serve and support veterans through hockey. It’s very cool that we can play, but one of the best parts is just hanging out together. Some players said, “It saved my life. I was in a dark place, no one understood, but that gave me a purpose, something to look forward to. ‘”

Anyone interested in learning more about the program, including participating, volunteering, sponsoring, or just watching, is invited to visit stlblueswarriorhockey.com or send an email This email address is being protected from spam bots! You need JavaScript enabled to view it.. Match and training schedules will be posted on the website and additional information will be posted on the St. Louis Blues Warriors Hockey Facebook page.

Sign up for St. Louis Blues Warrior Hockey (stlblueswarriorhockey.com). Allow 2 weeks for T-shirts to be shipped. For more information email This email address is being protected from spam bots! You need JavaScript enabled to view it.. 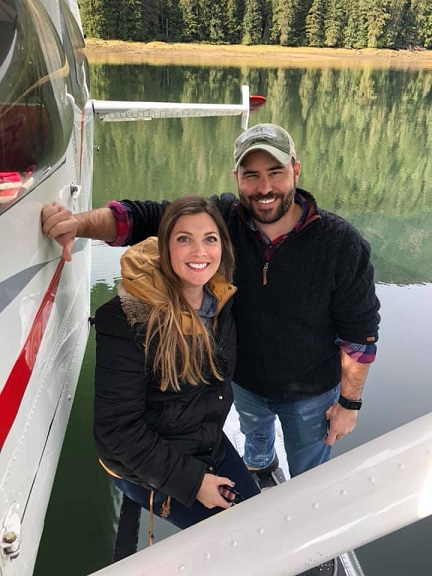 Nathan and his wife Allison. 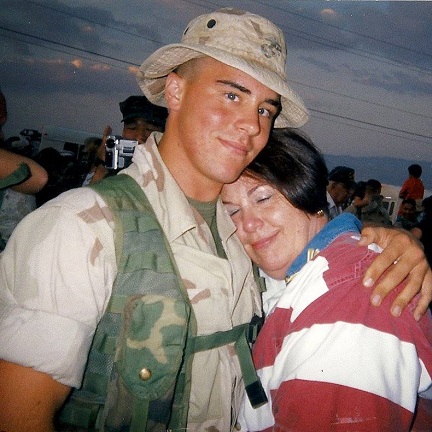 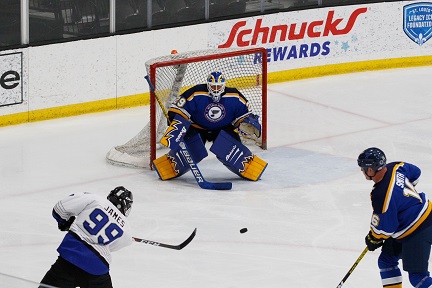 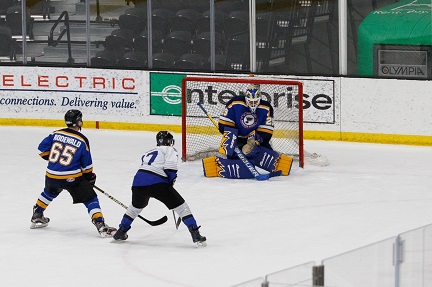 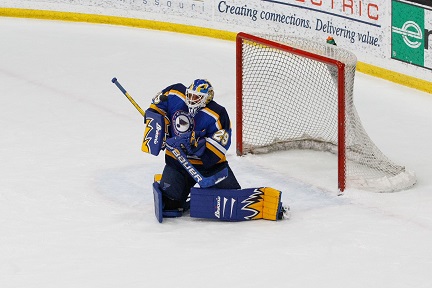 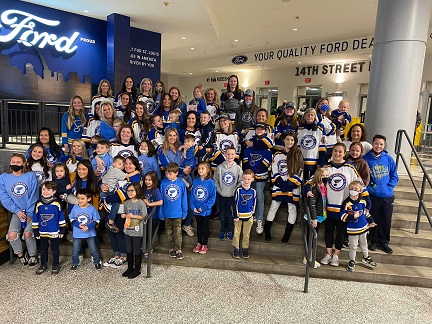