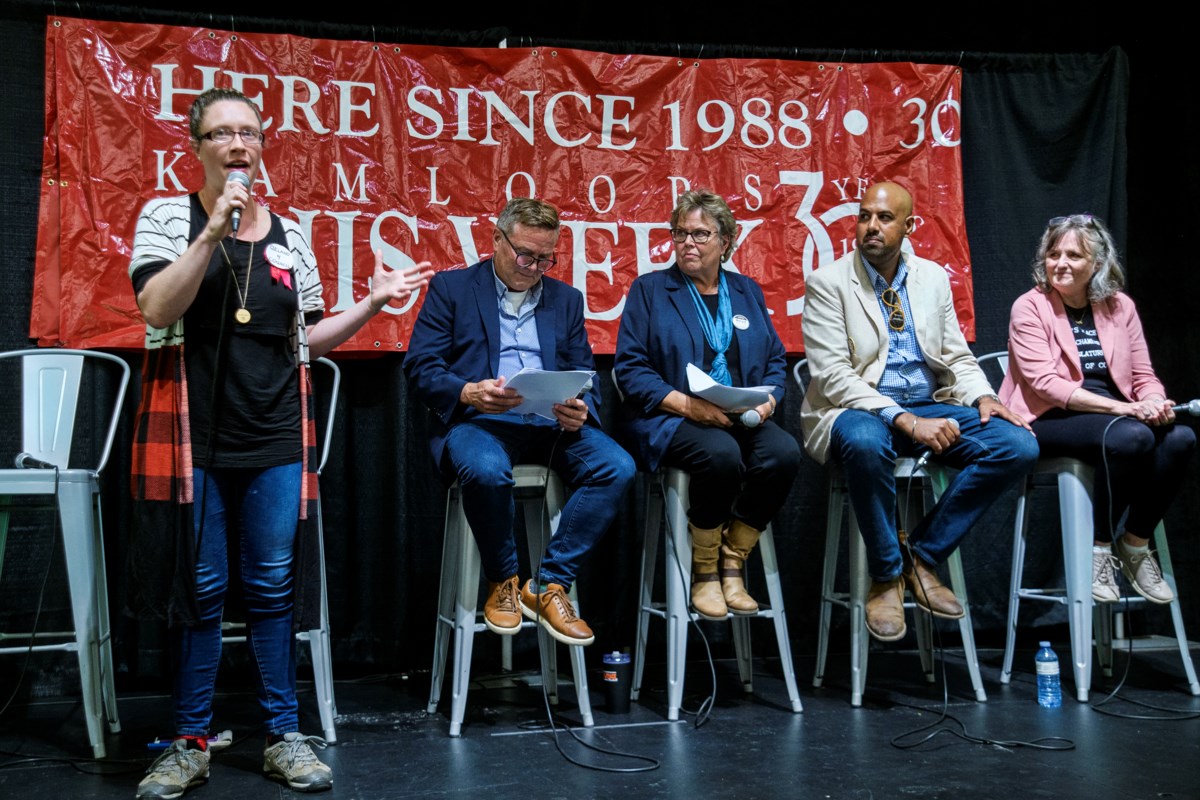 It was an evening filled with promise and a wide range of goals as 21 councilor candidates participated in the Civic Election Forum on Wednesday, October 5 in the Great Hall at Thompson Rivers University.

The forum was organized by Kamloops This Week, CBC Radio and Radio NL and was attended by approximately 500 residents, making it the most attended civic election forum in many years.

Outside the Great Hall before the forum began, candidates and their supporters stood ready, ready to fire with their handouts outlining their plans for the next four years as residents entered the hall.

Inside, the murmurs of the crowd and the candidates parading were sometimes deafening. A healthy stream of potential voters with questions — some sometimes snaking into statements — continued throughout the night.

The tone of the forum was civil – both from the crowd and among the candidates, who were divided into a group of mayors and four pools of councilor candidates.

Sandur said he wants to focus on more housing, noting the city needs to re-zoning to promote projects and digitize documents to expedite that work. Bass said councilors needed to push to get things done, adding she did so to create day spaces along Victoria Street West for the city’s homeless. Hall said there are many actions councilors can take, noting the need to listen and meet regularly with neighborhood associations to take the pulse of the community. Middleton said they could assess city operations from the inside and determine if the money was being spent wisely, while Cleland said while she was unsure of the rules, but she was excited to take ownership of the city’s problems and work on solutions.

A constituent asked if any of them would go ahead and support a performing arts center if elected.

Bass said she would, but has to look at a new business case considering it’s been three years since the last proposal. Hall noted that the center is already in the recreation master plan, which also includes two new ice pads and a North Shore pool. He said these projects need to start as soon as possible to avoid additional costs. Sandur said he supports the arts center’s proposal, but would like to see options, such as multi-family residential units, built above to help defray costs. Middleton said she was supportive of the arts center being built and Cleland said that as a dance teacher she would support it, noting that she would want to make sure what is built reaches all groups of people. potential users.

Another constituent asked if he supported the initiatives of the Kamloops-Thompson School Board. Cleland said she was 100% committed to working with the administrators to support the children, while Sandur and Hall said that to get results they all had to work together. Bass noted that the board meets twice a year with trustees, but added that more collaboration is needed, and Middleton said the city needs to work with the school district, noting that using the facilities of the other was closely related.

A constituent asked what they would do to ensure equity and inclusion of minority and disabled voices if elected to the council.

Middleton said they need to make sure the city listens to advocacy groups. Sandur said he plans to listen to recommendations from the city’s new director of inclusion and equity. Hall said the council needs to educate the community. Cleland suggested councilors participate in a simulation of what it’s like to live in people’s roles, which Bass said the previous council did. Bass said the exercise showed them and senior staff, for example, that there were issues with sidewalk unevenness, but the problem was the city’s lack of action. She said councilors needed to push for more action.

The next question was directed directly at Bass, with a constituent asking her why she didn’t support spending $35,000 on a sidewalk for a visually impaired man. Bass said it was a case in which she had to listen to the staff, who she said had informed her of an alternative idea that her neighbors shared the costs. The sidewalk, Bass noted, has been installed.

Hall said as an elected councilor you have to give direction to staff and if the sidewalk is needed, it has to be done. Sandur said voting against the sidewalk was a missed call, while Middleton said sidewalks in many parts of the city were in poor condition and needed improvement. Cleland said it was difficult to hear such stories, but noted that the context behind this issue was unclear. She said options need to be explored to carry out such projects.

The final question of the evening came from a 75-year-old man who asked how candidates can convince him and his wife to stay in Kamloops because they feel unsafe, due to bad drivers and street issues.

Middleton said there has been a decline in livability in Kamloops and the new council should come up with changes that keep people like him here. Bass said she wanted a clear answer and asked that they believe in Kamloops to find answers to these questions, while Hall said there was work to be done on issues such as road safety . Sandur said there was no apparent solution, but he would fight to find one. Cleland cited the work of the local Kamloops Caremongers group during the pandemic as an example of having reason to hope that a community is coming together.