City of Fairfax candidates share their views on development, traffic and budget 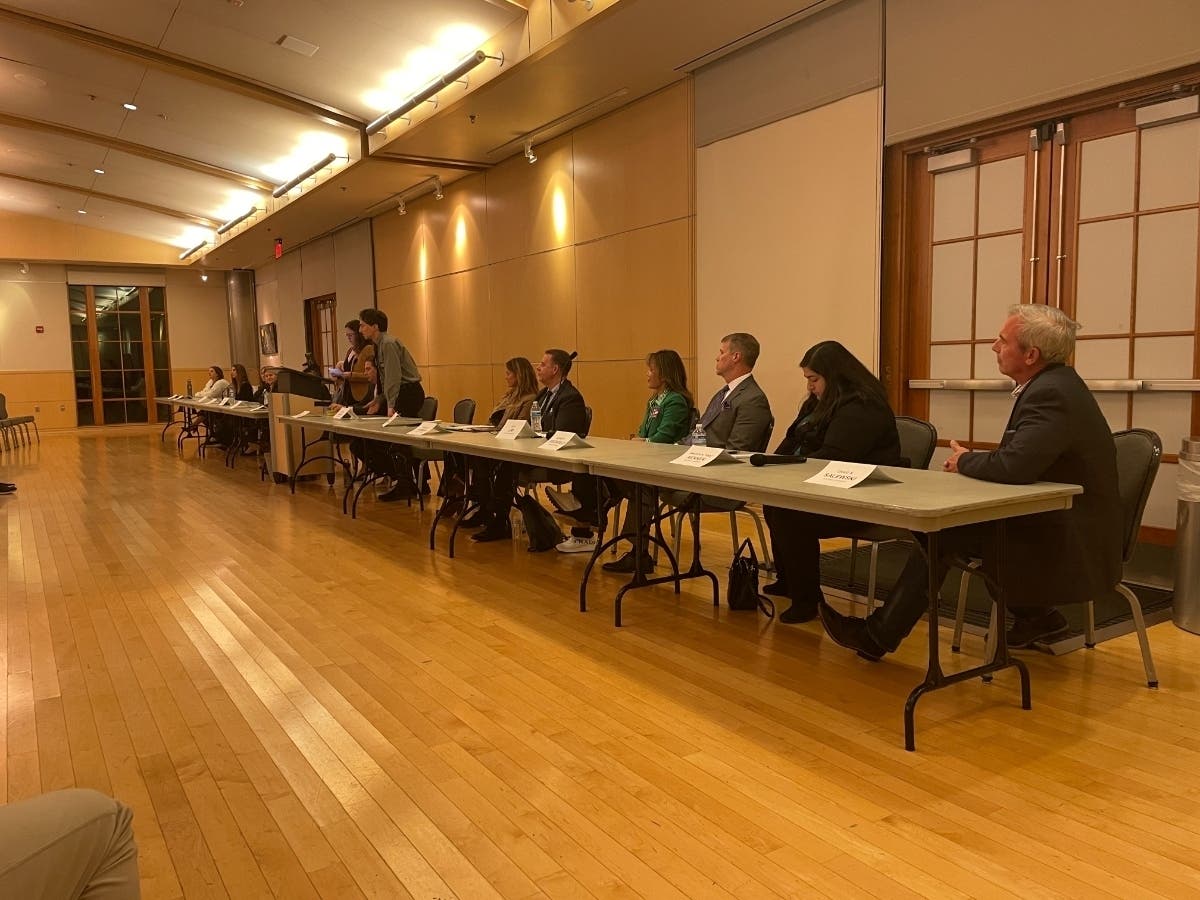 FAIRFAX CITY, VA — Candidates running for mayor, city council and school board races in Fairfax City answered a variety of questions during Wednesday night’s candidates’ forum at the Sherwood Center.

About 90 people turned out to watch the event organized by the civic associations of Cobbdale and Old Lee Hills. Amy Moir, a member of the League of Women Voters, served as moderator.

“We had this facility originally for two days, but there was a scheduling conflict, so we could only do it one day,” said Jana Tilinger, board member of the Old Lee Hills Civic Association. “It would have made things a lot easier. We would just have had more time with the candidates and more specific questions for each of them.”

After each of the candidates from the three races had a chance to make their opening remarks, the focus turned to the candidates for mayor and city council, who responded to questions submitted in writing by the public.

“The goal was to gather questions from neighbors and ask the questions,” Tilinger said. “There would be no conversation and there would be no people standing in the audience and asking questions. This was going to be a formal way of asking our questions of all the candidates.”

Qualifications for the position…

“Being an immigrant child who came to the United States at the age of 4 and didn’t speak any English at all at first was very difficult. And that kind of helped me learn how to deal with people in so is the military. Because when you “I’m in the military, we deal with people from all over… different backgrounds and cultures. I think that’s what we need here. We have an amazing city here where almost 30% of people are foreign born in our city. You look at the diversity and you even look at this board that we have right now and the diversity there. You must be able to work with a variety of people. My professional background, whether in law, politics, government or military leadership, I think all bodes very well for me to be able to take on the responsibilities and duties of our mayor. “— Sang H.Yimayoral candidate

“I think leadership qualities create an environment where people work together collaboratively, where there is a safe space where people can discuss and be respected even when they disagree. I think it’s important to to be the voice of the city and to be the person who can work between council and city staff and our city manager, and I think those are core skills that I’ve developed over the last 50 years.” — Catherine S. Readmayoral candidate

“I’ve been involved with the City of Fairfax for over 30 years, from starting on the Parks and Recreation Advisory Board, to becoming Vice-Chair of the 2020 Commission, to serving on the Development Subcommittee economy, and then eventually being elected to the council. I have been absent from the council for the past four years, but I have continued to be involved, raising money for charity, helping to fight hunger in kids here in the city of Fairfax. I think the experience matters.” — Jeffrey C. Greenfieldmayoral candidate

“The first thing I want to make sure I focus on in any development is getting all residents involved from the start. So when developers first come to the city council and the mayor, instead of having these discussions without your knowledge, make sure that residents are engaged. I want to prioritize neighboring residents and their concerns about development and also environmental concerns. We need to start paying attention to the impact that we we have on trees, green spaces and waterways and that really needs to be a priority.” — Kate Doyle Feingoldmayoral candidate

“We’ve got to get to a place where we find ourselves able to build destinations. The strip malls of the 1970s won’t do that, folks. We’ve got to find a way to get people out of their homes and not click on Amazon.com in order to buy what they want to buy. We do this by building a destination. — Joseph D. Harmon*, mayoral candidate

“First, if we’re doing the small area plan, I think we need to be more conscientious about what kind of plan we’re putting in place. Once we’ve put the plan in place, the developers come in and ask what we’ve got so let’s make sure that when we work on a small plan area, we are more aware of density, height, walking, as well as sustainable and eco-friendly buildings, and what the neighbors want. ” — So P.Lim*, mayoral candidate

“We need to find places for this economic growth to accommodate and allow business to continue in these areas, while protecting and supporting our neighborhoods. We can do both. We have the opportunity now, over the next few years, to attract the kind of economic growth that will fuel our future, provide opportunities for our children and our grandchildren. We have to find that balance and we have to involve our citizens in all the decisions we make. — DT “Tom” Ross*, mayoral candidate

On the city budget…

“I am grateful that we are funding our schools. I think we need to look at funding and make sure our schools and our teachers have enough for the years to come. As we see more development appear, we are going to have more of students…. The next council needs to think about how the schools are going to be funded with all these new developments, so that we don’t have overcrowding in our schools.— Anahita N. “Ana” Rennermayoral candidate

“In terms of the police budget, that would be something I would like to look at. I think that would be something I would look to increase. We seem to have a growing city. We’re going to need more police They’re going to need new gear and maybe even more agents just in different parts of the app. Craig S. Salewskimayoral candidate

“First, what keeps me awake at night, health care costs. Right? We are the chairman of the board of 400 people who have health care that we give them. provide. It’s a critical component and how we fix it as a nation impacts our budget and our bottom line. The second is mental health. … I’m incredibly proud of the work we do to Let the Crisis Response Task Force think about this now. 988 is for real. … 988 deserves as much investment as 911 because sanity is sanity. It’s the areas that keep me awake at night. Jon R. Stehle Jr.*, mayoral candidate

“We don’t need to reinvent the wheel. We already have Falls Church and Arlington. They have made improvements that have worked for them and we need to look to their examples. They prioritize walking and focused development on transit, and create more of a grid of streets, where we don’t see the huge bottlenecks that we have in old town Fairfax, massive blocks with no through streets where there should be through streets and we need to prioritize finding more CUE bus service. Billy Batesmayoral candidate