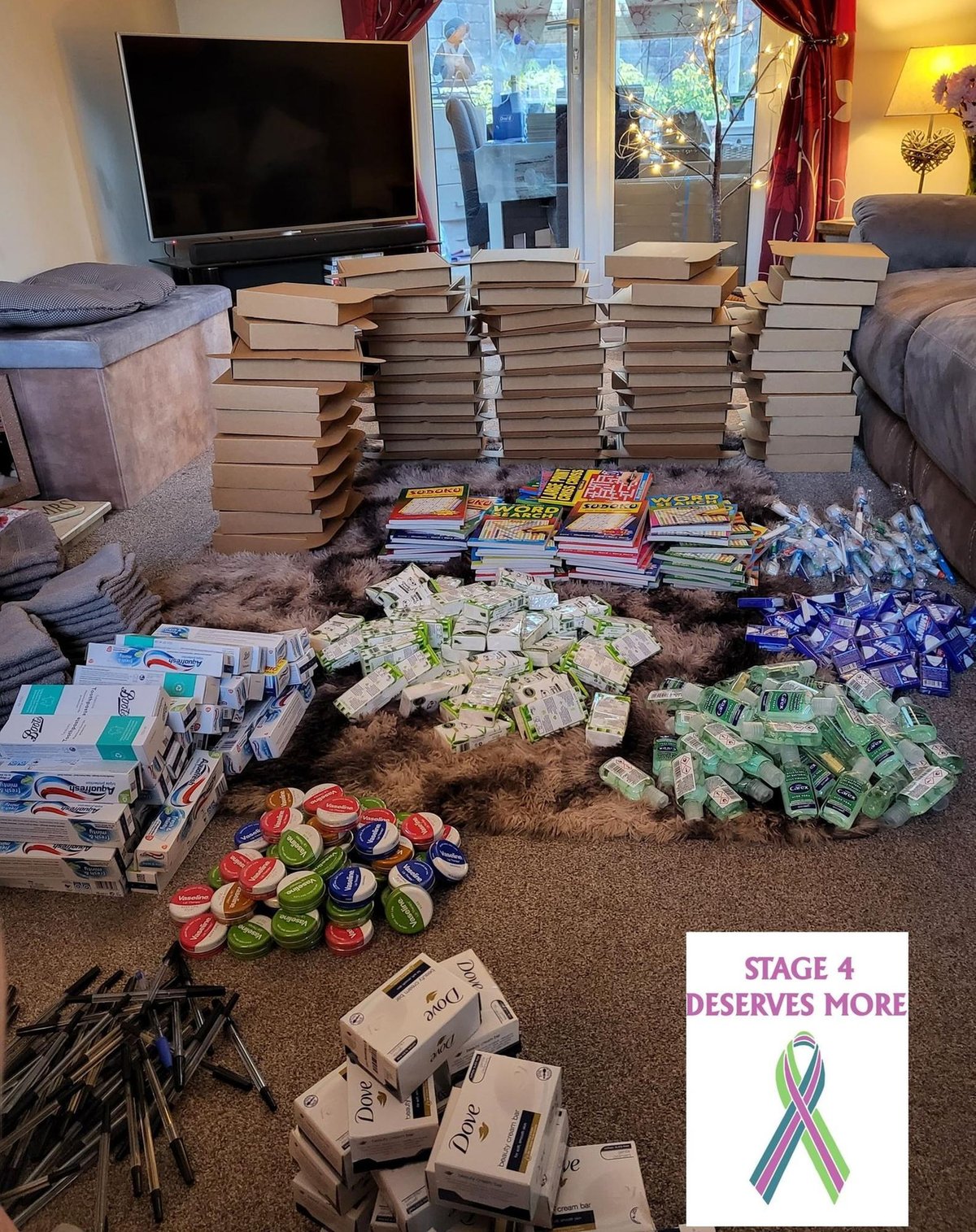 Within days, Gemma Ellis secured a charity number for The Gem Foundation – Stage 4 Deserves More, but she also took over a retail unit in Chapel and received a letter from Boris Johnson praising the good work what she did.

The 39-year-old said: “I don’t think it’s sunk in yet to be honest. It all happened so quickly and unexpectedly.” “Being mentioned in parliament and receiving a letter from the Prime Minister, I thought Ant and Dec were about to get out of a place where I honestly couldn’t not believe it was all real.”

Becoming a charity was not on her radar, she says, but her friends talked about it.

Some of the support packs crafted in Gemma’s house.

Now that means she can apply for charitable grants, hire space and staff, and expand the good work she does to help others.

Previously, Gemma, her husband Ben, 33, and their daughters Ruby, 12, and Scarlett, 10, made packs at home to send to people with secondary breast cancer or sent different packs to hospitals for patients suffering from cancer. admissions.

Gemma said: ‘When that amazing email with the charity number came my friend and I went to see what commercial rentals there were and saw an office and storage space and I thought this would be perfect for separating home life and charity work and getting my porch back!

The new unit is based on the first floor of The Old Stocks building in the Market Square in Chapel and will sell charity items, handmade goods and second-hand goods such as clothes, toys and books.

Gemma Ellis and her daughters Ruby and Scarlett

She said: “I’m really excited to have my own space as currently my office and storage space is my veranda so it will be nice to sit around a dining table again.”

After being stable for a few years, which she says was not expected, things unfortunately got worse and she was diagnosed with two secondary lesions of breast cancer to her brain which required targeted radiation therapy.

She then began a trial which was unfortunately cut short due to her needing brain surgery.

She said: ‘I had surgery to remove one of the lesions which had started to grow again a week before Christmas last year and unfortunately I got an infection after being unloaded into the wound and I ended up being rushed to the hospital for further surgery on my birthday. , which is New Year’s Day.

“Unfortunately my next round of scans showed that I had multiple metastases to my lungs and cancerous fluid continued to accumulate in the lungs and pleural lining and I continued to be rushed to hospital with breathing difficulties to have my lungs drained.

“Until I had a permanent lung drain fitted, I was getting by at home on oxygen which I used 24 hours a day, but after starting my new treatment, I’ve stopped it for the past few days. weeks and I hope this treatment works.

“We will know in mid-August when I have the first series of analyzes since the start of the new treatment.”

Since she started helping others think about her own treatment, she has sent over 1700 packs across the UK.

She said: “I get good feedback on the packs and how the receiver feels encouraged etc. which is worth it. The packs have grown over time and hopefully will continue to do so now that we have charitable status.

“While I would like to include patients with primary breast cancer, the sad reality is that I would not be able to meet the demand. And I also have to remember that I am sick myself, which which, when things go like this, it’s easy to forget when you’re wrapped up in it all.

Her work caught the attention of Boris Johnson who sent her a personal letter which read: “I recognize that following a diagnosis of cancer and the individual may feel the news is overwhelming – that the once blue skies have now become black.

“Your decision to bring much-needed light to others affected by this cruel disease is a testament to your strength of character.”

A new element of charitable status is the Gem Foundation.

Gemma added: “I’m very excited because I wanted to leave some sort of legacy for the girls and that’s it.”

The Gem Foundation, which is in Stage 4 Deserves More, is for secondary breast cancer research only and builds on the £10,000 that was already donated to Christie’s Hospital last year .