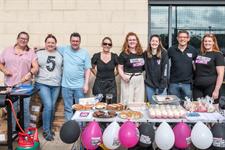 Richard Marriner has worked for JD Wetherspoon for 25 years and has been part of the pub chain’s partnership with Young Lives vs Cancer since its launch 20 years ago.

Beginning his career with the company as a shift manager, Marriner progressed into pub and area management and became regional manager.

He has been an active fundraiser for the charity partnership for most of those years. He also plays a key role in planning and executing two of JD Wetherspoon’s biggest annual staff fundraising events: its KICK for Young Lives vs. Cancer football tournament, which takes place every September, and a annual darts, held in its pubs every January. .

Richard created the darts tournament, which was originally held as a small event in his area. It is now in its seventh year as a tournament across the chain, with over 400 teams competing in 70 pubs across the UK to take part in a national final.

This event alone raised over £1million for Young Lives vs Cancer.

In 2022, Richard also takes on an epic personal challenge, taking on two wheels as he pedals from London to Paris alongside a group of 35 other colleagues, all in support of Young Lives vs Cancer.