Biker riding from Florida to Alaska for charity 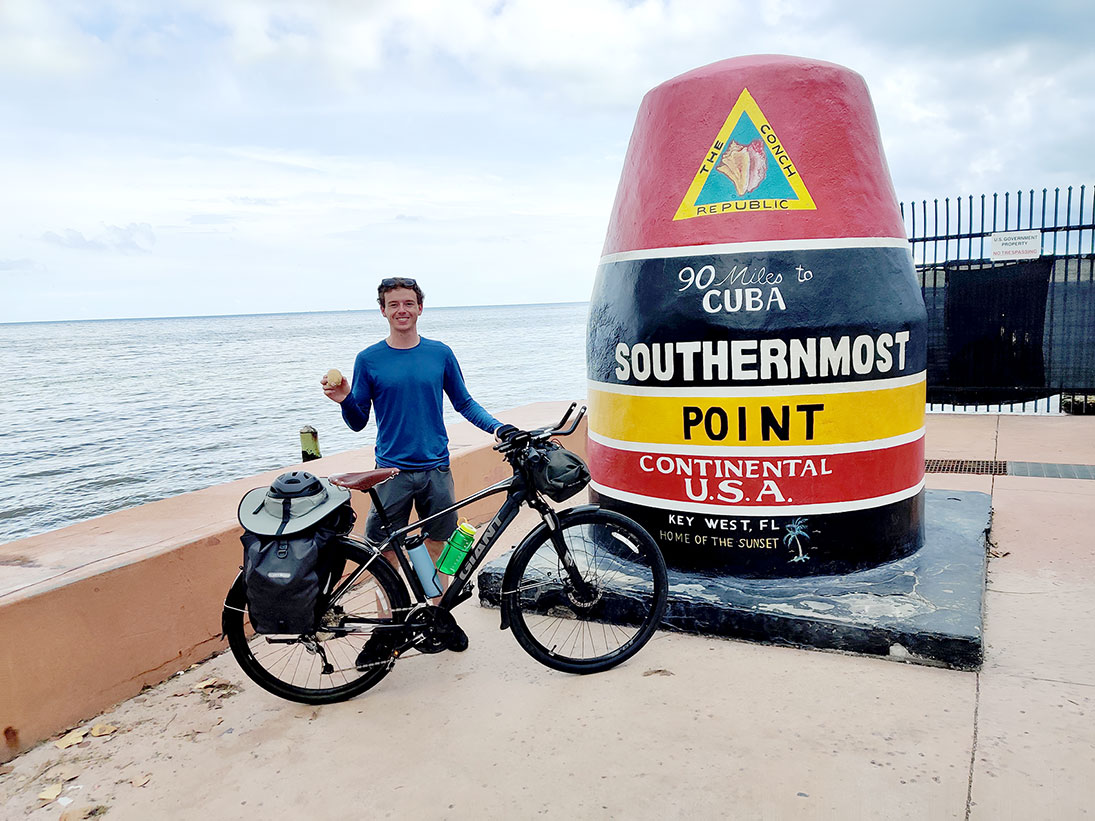 Ian Randman embarks on a long journey to support childhood cancer research in memory of his cousin.

Randman, from Long Island, New York, cycles from Key West, Florida, the southernmost point in the continental United States, to Prudhoe Bay, Alaska, the northernmost point in North America accessible by road, over a distance of approximately 10,000 km.

The Star spoke with Randman in Whitehorse on September 7.

Randman explained what inspired him to embark on this epic journey.

“I’m doing this for charity in memory of my cousin (Joshua Randman) who passed away a few years ago from cancer…he passed away in early 2018 from a rare type of cancer. He was a big face in an organization called Tackle Kids Cancer and they are based in New Jersey so this trip gives me the opportunity to raise money for them and to raise awareness about my cousin and childhood cancer.

“Besides that, I’ve just graduated from university, so I think it’s a good time to make the trip before devoting the rest of my life to work.

Randman began his journey on June 1. He took three weeks off in Florida with his grandparents and another week in Denver with a friend.

He had driven 66 days and thought he had about 20 days left to reach Prudhoe Bay.

“Conditions are going to get a lot tougher from Fairbanks. Hope has to be done before October 1, but if I had to guess, somewhere around September 25, 27,” Randman said.

“The weather is getting colder up there so I’ve covered more distance each day than I anticipated… it sucks a bit of fun, I still have a time constraint but I enjoy doing a lot of distance each day…I like to go to the next restaurant to have something that isn’t peanut butter,” says Randman.

“Soon I will have to carry two weeks’ worth of food. Difficult road conditions, difficult weather.

Randman will ride the Dalton Highway north of Fairbanks, which resembles the Dempster in the northern Yukon.

“They treat it with calcium chloride, so when it gets wet it’s like cement,” Randman said. “Like, the mud is like wet cement. It’s awful for the bikes, I hear. There’s a lot of elevation…if I’m above 100km a day, I’ll be happy .

Randman said he supported Tackle Kids Cancer because “for years I wanted to do something for my cousin. This is a great opportunity to talk to people and spread the word about this…childhood cancer does not receive as much government funding or attention as other types of cancer.

Anyone wishing to support the cause can visit ianrandman.com/fundraiser

“You can read about my cousin,” Randman said. “Soon I will be sharing a petition for the government to provide more funding for childhood cancer.

When asked how he was funding his long trip, Randman joked “McDonald’s!”

“I did internships and I got some money out of it. I live pretty cheap otherwise. My only expense right now is food. I try to keep it under $10 a day. In the United States it was cheaper than that. Here it is a little more.

“Don’t buy a Giant bike,” Randman joked. “It should have been a good bike, but it’s like they used all the faulty parts to build the bike. The bottom bracket…completely failed on day 2.

“In Denver I got a new wheel and tire, new grips, another bottom bracket. In Florida, I got new brakes. I might get another new wheel today, maybe some new pedals. Riding in the rain doesn’t help the bearings of the bike either.

Randman is good at maintaining his drive.

“As long as I have all the tools with me, I will do all the maintenance myself.”

The weather played a big part in his epic excursion.

“In the southern United States I was dealing with 37-40°C and it was just miserable. Specially at night. I’ve never slept so badly.

“Here, at the moment, it is starting to get quite chilly at night.

“When I was in Wyoming and Montana, the headwinds were awful.

“I managed to avoid rain for most of the trip. I had a tropical storm on day 3. I had tornadoes in eastern Colorado but not much rain in between, but the Last two weeks it’s been a lot.(Almost every morning it seems like it’s raining and sometimes it’s raining all day.) I get wet and hope it doesn’t rain when I stop.I am dry by the time I get off the bike.

“Beyond that, the main surprise of this trip was the people I met. I started this trip thinking it would be mostly scenery and bike rides, but really it’s all about the people. (It makes me kinda happy not to have an e-bike, or I have bike problems and other issues, because it makes me go out and talk to people, stop more frequently.) Some of the best experiences of my life has been on this trip.

Randman also had some memorable encounters along the way.

“I had a lady in Tennessee…she threw a full can of soda at my head. Luckily she missed, so it was pretty funny,” Randman recalled.

“In Denver, I had a wife…she kicked me out of a Sonic. ‘Leave this establishment and never come back’, like running after me.

Another incident occurred in Florida.

“In the south…I slept in a church one night, outside. They called the police. It wasn’t a safe town, so they thought I was robbing it. That’s actually the reason I went to church. I was originally in a park and didn’t feel safe there and this was the only time on this trip where I set up camp and then moved because I didn’t feel safe security.”

“I slept in prison one night, but it was by choice. In the south, whenever I saw policemen at night, I would ask them, ‘Where’s a good place to sleep?’ …I walked past a correctional facility and asked…and they said, “Here. I slept on the right side of the door.

“I have two cans of bear spray and a can of bears for my food, so I feel safe. I’ve encountered bears, but they’re all so busy eating they don’t care. .

Randman has two power banks with him and his phone has a fast charger. He bought a new phone in Denver, so the battery is practically new.

He doesn’t have a stove, but has three pounds of peanut butter with him, as well as granola bars and cookies.

As for how he felt, “the legs are a little tired,” Randman said.

“Yesterday I came from Teslin, so it’s been 190km. It was one of my longest days. I’m a little sleep deprived but am much happier now with the colder weather. Back in the States, I stopped frequently during the day due to heat exhaustion.

“Overall I feel good as long as there is no headwind.”

Randman had a few delays before his trip started, including getting COVID before the trip.

“Prudhoe Bay gets very cold very quickly so when I get there the average high will probably be around freezing. I spent a lot of this trip slightly stressed about that; doing big days – the plan was to average 100 km a day, but now if I do 100 km, I’m like, ‘Oh, that’s it.’ So I’m certainly happy now that I’ve gained a lot of time and so my target now is just to get it done before October, which I’m on track to do.

Update: Randman has now arrived in Fairbanks. He will now travel north on the Eliot Highway for 100km, before the most difficult part of his expedition on the unpaved Dalton Highway for 600-700km.

“It’s going to be tough, especially since it’s gravel. I have to worry about passing trucks kicking up the gravel. That’s enough to break people’s windshields,” he said.

Randman plans to return to New York from Fairbanks after his epic bike trip.