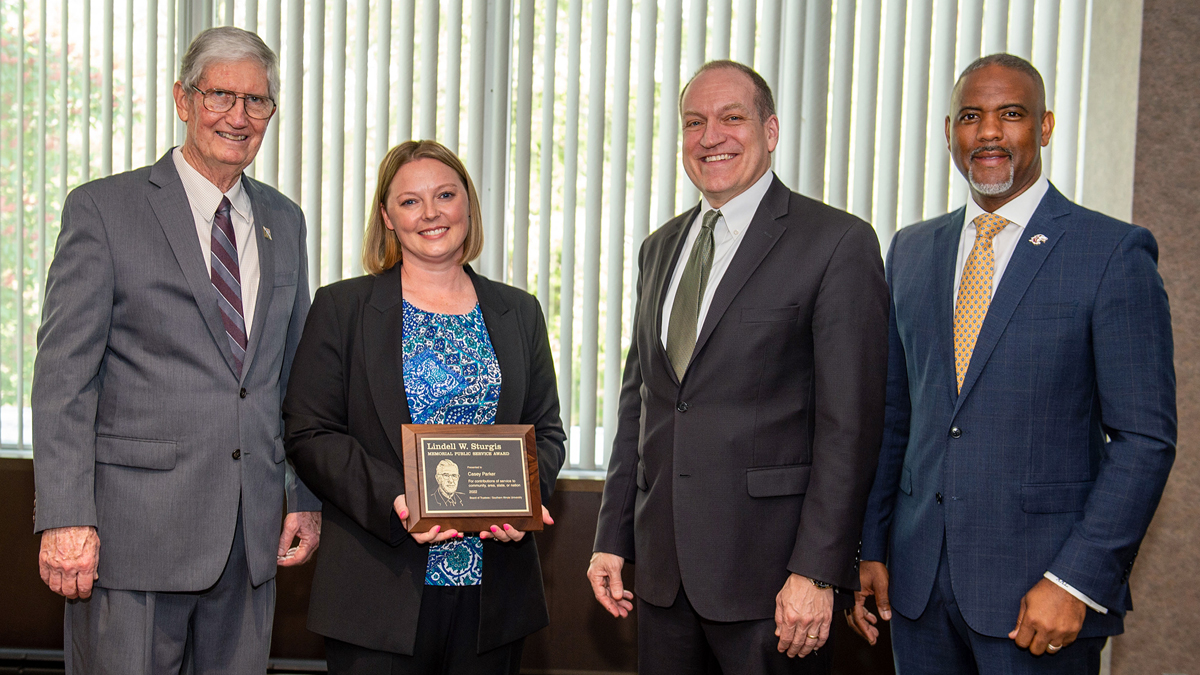 His desire to get involved and help continues. Parker, who is coordinator for the Office of Equity and Compliance, was honored for her selflessness with the 2022 award Lindell W. Sturgis Memorial Public Service Award today (April 28).

Parker’s many volunteer efforts include more than 15 years on the board of the Humane Society of Southern Illinois (HSSI), of which she is president; current President of the Rotary Club of Jackson and Williamson Sunset Counties; an active volunteer at SIU Law School, including serving as a mock court judge and academic advisor for the Delta Zeta sorority on campus. Some of Parker’s past pro bono work includes serving on the Carbondale CrimeStoppers board and the Williamson County Court Appointed Special Advocate (CASA) program.

“It was kind of a shock to be nominated; it was really a shock to win,” Parker said. “It’s something I’ve always done.”

Parker’s nomination essentially started out as two separate efforts that later coalesced into one. Bobbi Knapp, associate professor in the School of Humanities, and Dawn Legier, office administrator in the Office of Equity and Compliance, both detailed Parker’s work.

When Knapp hosted a property and fundraiser to accompany volunteers to help in the aftermath of the December 2021 tornado in Mayfield, Kentucky, the nomination notes, Parker “was one of the first people to reach out. to lend its support, tapping into its network and giving of itself to provide much-needed supplies to those whose lives have been devastated by this natural disaster.

Gwen LeBeau, who served on the HSSI board with Parker, wrote that “shelter animals are her (Parker’s) passion and she has dedicated countless hours to improving their lives. When Casey gives her time to an organization, she does so wholeheartedly with her time and her money. She worked tirelessly for HSSI, giving up her evenings and lunch hours to meet staff or attend a committee meeting.

A major initiative started during Parker’s time on the HSSI board is a transportation program where homeless pets are taken to other shelters to be adopted elsewhere. This increased the number of animals saved from 70% to 99% per year. HSSI is an open-access shelter, meaning it welcomes all animals that come to the facility.

Parker came to SIU Carbondale as a student in 1995 after graduating from Robinson High School. She is a three-degree alumnus who graduated with a bachelor’s degree in psychology and the then administration of justice program in 1999, followed by a law degree in 2003.

She has over 11 years of service to the university. She became a member of the Criminology and Criminal Justice faculty in 2010 and started in the Office of Equity and Compliance as a rights and responsibilities specialist. Hired as Equity and Compliance Coordinator in 2015, Parker provides a campus-wide sursite for Title IX, Title VII, the Americans with Disabilities Act, and the Illinois Human Rights Act. She meets with campus officials about compliance, as well as training staff, faculty, and students on these issues. Parker is also investigating allegations of misconduct involving discrimination, sexual harassment, gender-based violence, stalking, sexual assault, dating violence, and domestic violence.

“It’s not an easy position, just depending on what we have to face. But it is something that is necessary for the betterment of the SIU community,” she said.

Parker takes to heart the motto of the Rotary Club, “Service before self.”

“It’s something that’s ingrained in me,” she said. “It’s part of the fabric of who I am. I don’t know what I would do with myself if I wasn’t a volunteer. I spend so much time every week doing something, it’s just who I am. I want to get involved and I want to improve my community, especially for those who I consider to be the most vulnerable. It’s my motivation.

Recently, Parker has started helping the Southern Illinois Irish Festival Board of Directors; the festival will take place from 10 a.m. to 6 p.m. on Saturday, April 30 at Turley Park in Carbondale. She is also working to create a Circle of 100 Giving Women in Jackson County through the Southern Illinois Community Foundation. The concept is simple: 100 women meet three times a year, each donating $100 per meeting. Local charities or local branches of a national charity will then make presentations and the group will decide which charity will receive $10,000 per meeting. She hopes to begin the effort this summer; a similar program is in place in Williamson County.

Recalling her work with the Humane Society and noting that she relies solely on local donations, Parker said $10,000 could really help organizations.

“I knew it could be a big boost. I like the idea of ​​local women helping local charities,” she said.

Parker remembers his grandparents volunteering throughout their lives. She believes the same kind of role models are lacking today.

“In my various roles I’ve seen a lack of volunteers and a lack of people wanting to be on the board and doing things like that because I don’t think they have a lot of people mentoring them to doing community service,” she said. mentioned.

The answer as a volunteer is simple: just ask. Most likely, this question will be met with enthusiasm by other volunteers, according to Parker.